The lead bill, SB 1248 sponsored by term-limited Sen. Dave Robertson (R-Grand Blanc), would shift campaign finance oversight and enforcement from the secretary of state to a bipartisan “fair political practices commission.” It would include three Republicans and three Democrats chosen by the governor from a list of names submitted by each major political party.

The vote was 25-11, with one Republican voting no, Rep. Dale Zorn (R-Ida). The legislation now moves the Michigan House of Representatives.

Benson did a two-part tweet this evening in response to the Senate’s action:

“Today Senate Republicans have voted to gut the enforcement of Michigan’s campaign finance law. Their hyper-partisan approach is in sharp contrast to my intent to collaborate across the aisle to take Michigan from worst to first in ethics and transparency. Their action is an affront to every taxpayer who wants and deserves a government that is transparent and accountable. I continue to believe, if not hope, that House Republicans want to work together to solve problems, not create them, and will reject this bill on its face.”

Today Senate Republicans have voted to gut the enforcement of Michigan’s campaign finance law. Their hyper-partisan approach is in sharp contrast to my intent to collaborate across the aisle to take Michigan from worst to first in ethics and transparency. 1/2

Craig Mauger of the nonpartisan watchdog group Michigan Campaign Finance Network (MCFN) said he thinks the legislation could jeopardize the public’s ability to access crucial information about the role of money in state politics. He said some lawmakers are trying to shift the oversight of campaign finance away from the secretary of state. Mauger added that members of same political party on the commission will likely always agree with each other.

“So that commission will continually deadlock at 3-3. How is it going to accomplish anything?” he said.

“Twenty-three other states have some form of commission that enforces their campaign finance laws,” Robertson said. “This idea is not unique.”

It’s not a power grab, and it’s not an attempt to undermine Benson, according to Amber McCann, spokeswoman for Senate Majority Leader Arlan Meekhof (R-West Olive). 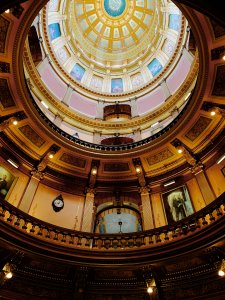 “No,” McCann said. “Sen. Robertson’s goal was to set up an independent, bipartisan commission modeled after similar entities in 23 other states to have oversight over campaign finance rather than house that oversight in a single political office.

“I don’t think it’s a power grab whatsoever,” McCann continued. “We’ve had a number of things change in Michigan — significantly change what we’ve had in terms of ballot questions that were approved by voters. When that happens, we’re also left with an additional amount of details that need to be specified so we can implement those ballot measures. I think this is a typical response from the Legislature in terms of further defining those ballot proposals.”

On Nov. 6, voters approved Proposal 2, which establishes a nonpartisan redistricting committee, and Proposal 3, which makes a host of changes to Michigan’s voting laws, including reinstituting straight-party-ticket voting and establishing no-reason absentee voting.

McCann said she thinks “a legislator can come up with an idea and present it at any time within the session. So I don’t know that it’s a power grab. I don’t think I would characterize it that way at all.”

“It’s important to remember that while we make the laws, we are not above them,” said Sen. Steve Bieda (D-Warren).

Bieda told colleagues during his “no” vote explanation on the floor that the legislation would strip power from Benson to oversee campaign finance law compliance and instead grant that authority to a group of “unelected bureaucrats” in a system modeled after the Federal Elections Commission.

Sen. Jim Ananich (D-Flint), along with other Democrats — including Hillary Clinton and U.S. Sen. Debbie Stabenow (D-Lansing) — have slammed Republicans for what they call a blatant power grab meant to strip authority from incoming Democrats who won major statewide offices in Michigan.

“I think this is day six of thwarting the will of the voters. This amounts to … the equivalent of a legislative coup of the will of the voters,” Ananich told reporters after a lengthy Senate session. “I mean, every single thing that they’ve put forward, they found a way to undermine it. Today was secretary of the state day. We’ll see what next week is.”

“It’s definitely not what the voters had in mind a few weeks ago,” he added.

Genesee County Clerk John Gleason, a Democrat who formerly served as Michigan House and Senate member, said in a news release that the secretary of state “is the right person to oversee campaign finance, which is why it’s been that way in Michigan for decades.”

Gleason also noted Robertson has had a long history of “serious campaign finance issues” and accused him of demonstrating a conflict of interest. Robertson has accumulated $4,450 in fines over a four-year period and owes $1,681 in penalties, according to Gleason.

“That’s about the most perfect example of the fox guarding the henhouse that I’ve ever seen. Dave Robertson is part of the swamp that reformers like Jocelyn Benson are trying to drain,” Gleason said.

When asked this week by reporters if he was the appropriate person to bring forth legislation in light of his campaign finance violations, Robertson said, “I’ve complied with the state law with regard to my own situation in every respect and continue to. And yes, I am the right person, cause I am the chairman of this [Elections and Government Reform] committee and I have the power to do this until Dec. 31 — actually Jan. 1 at noon.”

The nonpartisan League of Women Voters “condemns today’s actions in the Senate to weaken the enforcement of campaign finance laws in our state,” said President Judy Karandjeff in a release. “This legislation is the opposite of what voters demanded from their elected officials on November 6th and should be rejected by our leaders in the State House and by Governor [Rick] Snyder.”

Mauger of the MCFN noted that the GOP package was just introduced on Nov. 29.

“A lot of the worst decisions are made in a hasty manner,” Mauger said.

‘He’s doing their bidding’: Critics say Republicans use… by Anna Gustafson April 17, 2022
With new Democratic leadership next year, what long-inert… by Allison R. Donahue December 5, 2022
Jocelyn Benson wrote the book on secretaries of state. She… by Andrew Roth August 20, 2022