WASHINGTON — John Dingell was never known as one to hold his tongue. 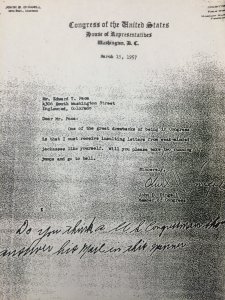 The iconic Michigan lawmaker, who died last week at age 92, was known for his combative style during his more than 59 years in Congress. During his career on Capitol Hill,  he was famous for “Dingellgrams,” pointed requests for information from administration officials. After his retirement in 2015, he went to war with President Trump on Twitter.

Dingell’s pull-no-punches style dates back to his early days in Congress in the 1950s. That’s evident in a legendary letter long circulated among his cadre of staffers that was obtained this week by the Michigan Advance.

In the letter, dated March 15, 1957, Dingell appears to have been responding to Edward T. Pace of Englewood, Colo., although the print is difficult to decipher.

Dingell wrote, “Dear Mr. Pace: One of the great drawbacks of being in Congress is that I must receive insulting letters from weak-minded jackasses like yourself. Will you please take two running jumps and go to hell. Sincerely, John D. Dingell.”

It isn’t clear what exactly prompted the letter from Dingell, who had won the House seat in 1955. At that time, Dingell was involved in handling much of his own correspondence along with an aide, according to sources. It also isn’t clear whether the letter was sent to the intended recipient. A source familiar with the letter told the Advance that it had come from someone who was critical of Dingell’s work in Congress.

A handwritten sentence scribbled at the bottom of the letter appears to say: “Do you think a U.S. congressman should answer his mail in this manner.”

A service for Dingell is scheduled to be held in Washington, D.C., Thursday morning, ahead of his burial Friday at the Arlington National Cemetery in Virginia.

Another funeral for Dingell was held Tuesday in Dearborn in which he was eulogized by former Vice President Joe Biden.

‘He’s doing their bidding’: Critics say Republicans use… by Anna Gustafson April 17, 2022
Updated: Here are the election deniers running for the… by Laina G. Stebbins October 9, 2022
In wake of Lyoya’s death, a reckoning with Grand Rapids’… by Anna Gustafson May 7, 2022