How to build a better Michigan House map

Michigan voters can, at least in theory, have more competitive state House districts than what we have now.

That’s according to a hypothetical state House map drawn for the Advance by Steve Mintline, a Democratic data expert and organizer in Southeast Michigan.

The Advance asked Mintline to craft a map with as many competitive seats as possible, while Michigan awaits the results of a three-judge panel for a federal lawsuit, League of Women Voters et. al. v. Jocelyn Benson.

Secretary of State Jocelyn Benson is a party to the suit. But the Democrat tried to settle the case last month, igniting objections from Republicans, some of whom began calling her “Backroom Benson.” That consent agreement was rejected by the judges and the case went to trial, which concluded in early February.

The concept of gerrymandering dates back more than a century and is fairly simple: Legislative maps are drawn in such a way so as to “pack” or “crack” likely voters for one party into a few districts, allowing the other party to maintain power. Sometimes this results in weirdly shaped, salamander-like districts, but not always. 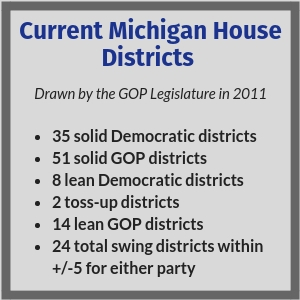 If the League and Democrats are successful in their lawsuit, a new map could be ordered redrawing at least 11 state House districts for the 2020 election. The Advance wanted to see what fairer district lines would look like.

Mintline used publicly available presidential election data at the precinct level from 2012 and 2016 to draw a new House map for the entire state.

Under Mintline’s proposed plan, Republicans would still maintain an advantage. Democrats in Michigan would actually lose one solidly blue district.

Mintline did manage to create more competitive districts. Under the new map, 30 House districts are “swing” districts in which the partisan base is within five points. There are currently only 24 districts under the existing map. Both maps have two “toss-up” districts that basically have a 50-50 partisan base.

Mintline’s proposed map shows 34 solid Democratic House districts, down from 35 under the existing map. The GOP has 51 solid districts and would lose five under Mintline’s map, which has 46 consistently Republican districts. 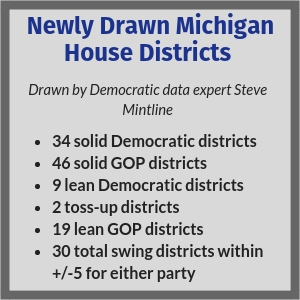 Eric Lupher is the president of Citizens Research Council, a nonpartisan think tank based in Livonia that’s done considerable research around the topic of gerrymandering in Michigan.

“If you live in the real world, there’s a lot of purple in Michigan. It’s not solid blue; it’s not solid red,” he said.

“Even within households, within neighborhoods — certainly within whole communities — there’s a broad range of perspectives on what government could and should be doing,” Lupher added. “So having competitive districts reflects that and forces the politicians to listen to constituents and react to that and be a voice for the people they represent.”

The Detroit News last year reported on emails between Michigan Republicans involved in the 2011 redistricting process talking about cramming “Dem garbage” into just a handful of metropolitan Detroit districts.

Mintline says he believes that gerrymandering and the GOP’s decision to draw districts to ensure they’re uncompetitive has served the party well for decades.

“If you draw with the idea that you create these competitive districts … you can draw maps that are … at least more attainable for either party to win the chamber,” Mintline said, noting that Republicans have largely controlled the redistricting process since the early 1990s. “So you’re really building on almost three decades’ worth of gerrymandering.”

He said he believes that Mintline’s map would likely be challenged in court on two grounds: how some districts break county lines and because they don’t do enough to take into account “communities of interest” — municipalities that are often purposefully drawn together into a single district.

“Those are the initial areas where I’d look to challenge,” Darnoi said.

Mintline said he attempted as much as possible to avoid breaking county lines when drawing the map. He said that his map breaks the same number of county lines as the current map.

Redistricting is about to undergo significant changes in Michigan, regardless of the outcome of the federal lawsuit.

In 2018, more than 60 percent of voters approved Proposal 2, known as Voters Not Politicians. An independent commission, which has yet to be formed, will take over the decennial redistricting process from the Legislature.

This month, a group of Princeton Woodrow Wilson School of Public & International Affairs graduate students in collaboration with the Princeton Gerrymandering Project wrote a report on the next steps they believe should be taken in Michigan to ensure a fair redistricting process, as the Advance reported.

Mintline acknowledged that his map would likely be rejected by the new independent commission because he used election data instead of Census data. He acknowledged that some districts would probably be viewed as “a little suspect,” because they are still oddly shaped.

Making competitive districts wasn’t necessarily a goal of the Voters Not Politicians proposal. Rather, the group hopes to see politics taken out of the process so that politicians aren’t involved in drawing their own districts.

Nonetheless, Mintline said he hopes that more competitive districts is an outcome.

“In my opinion, [competitive districts] is the best thing you can have for Michigan,” Mintline said. “When you have competitive races, you reduce the number of extremist candidates who can get elected. At that point, from both sides of the aisle, you have a lot more communication, a lot more willingness to compromise.”

Darnoi said he thinks — and hopes — that an independent commission will lead to positive change. But he also is skeptical, noting the commission has some restrictions and must follow the Voting Rights Act and other federal standards.

“I think the commission will find that it’s not as easy as everyone thinks to make maps that have ‘normal’ districts, that are competitive and aren’t too heavily partisan leaning,” Darnoi said, adding that he believes there need to be clear standards in place.

Still, he said that he expects that “whatever the commission draws up will be more competitive than what we saw in the last election cycle.”

How to build a better Michigan House map