During two campaign stops in Oakland County on Monday, 2020 presidential hopeful Kirsten Gillibrand argued that access to clean water should be a human right. 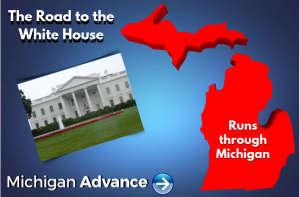 Gillibrand said she wanted to hold a town hall in Michigan because people here felt their voices weren’t heard in 2016.

“Michigan is a lot like where I’m from. I think these are the places that very much felt left behind in the last election. They didn’t hear their stories being talked about enough and so they didn’t feel like the Democrats were going to help them,” Gillibrand said.

“Michiganders deserve to be able to have a voice in our politics, not the moneyed interests that control everything in Washington, not the greed and corruption that decide everything with their votes, and that’s why I wanted to do a town hall here: I wanted to actually talk to people who live here about what they care about.”

In addition to the MSNBC town hall, she also held an event hosted by Fems for Dems in Clawson, where she was joined by Gov. Gretchen Whitmer and Attorney General Dana Nessel.

Gillibrand argued that she is the best person to turn Michigan blue in 2020, noting her electoral history in the state of New York. She started her career by flipping a Republican congressional district and has since won the most votes of any statewide candidate in New York, including from red, purple and blue areas of the state.

Beyond winning the 2020 election, Gillibrand said this will help her to breach divisions in the country and effectively govern, working with both Democrats and Republicans.

“This country needs to be healed,” Gillibrand said. “We need to come back together again and remember that we are strongest when we do care about one another.”

But Gillibrand did discuss several policy proposals that Republicans are unlikely to work with her on. Chief among them is the Green New Deal, a policy to combat climate change championed by progressives.

Shortly after the conclusion of her events, the Republican National Committee (RNC) slammed Gillibrand’s proposals and argued that her campaign is dead on arrival. In an unprecedented move, President Donald Trump’s campaign recently absorbed the RNC’s operations.

“From her disastrous handling of an office sexual harassment investigation, to hovering at zero percent support from voters, Kirsten Gillibrand’s failing campaign seems to be over before it even started,” said RNC spokesman Michael Joyce. “Add in her extreme proposals of abolishing ICE and implementing the costly Green New Deal, and it’s clear Gillibrand’s 2020 bid is on a path to nowhere in the Great Lakes State.”

And while the president declaring a national emergency over border security continues to be debated in Washington, D.C., Gillibrand pointed to the relationship between Michigan and Canada as a prime example of how we should handle border and immigration policies.

“Immigration is not a security issue. It is an economic, and a humanitarian and a family issue,” Gillibrand said. “Everyone here in Michigan knows we do enormously great things with Canada. We have economics; we have businesses; we have cross border transactions; we have kids going on field trips. This is why our border matters.”

While Gillibrand endorsed Whitmer over El-Sayed in 2018, she told him after the town hall taping concluded that “his voice matters” and encouraged him to run for office again.

Gillibrand was the first candidate to schedule a campaign event since Whitmer tweeted an open invitation for presidential candidates to visit the state last month. However, one of her rivals in the Democratic primary – former Texas U.S. Rep. Beto O’Rourke – made it to the state earlier in the day for three campaign stops.

“Michigan is an incredibly important state. I’m really heartened that Sen. Gillibrand was the first to call and say, ‘I want to come, I want to listen to Michigan residents and I want to focus on the things that matter,’” Whitmer said. “That’s what Michiganders want. I think we’re going to see a lot of candidates coming through Michigan and we’re going to make sure that we roll out the red carpet and engage because this is an important election.”

Gillibrand gave shout-out to Whitmer when announcing her run for president during an appearance on “The Late Show with Stephen Colbert” in January.

Colbert gave Gillibrand a gift basket of campaign essentials, which included a plane ticket to Michigan.

According to a spokeswoman, Gillibrand did not use that plane ticket to travel to Michigan on Monday.