Karen Holcomb-Merrill: We must support our immigrant neighbors

As a United Church of Christ minister and advocate with the Michigan League for Public Policy, I am given a daily opportunity to practice what I preach. 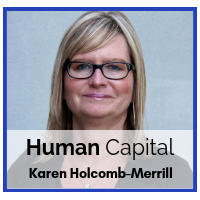 And my two worlds have been particularly aligned lately, as I’ve had a few opportunities to represent my faith and my profession in standing up for and alongside Michigan’s immigrants and Muslim residents.

I was recently able to participate in an Allies Training put on by Movimiento Cosecha Grand Rapids. The training was designed to help privileged folks like me, who don’t have to worry about their legal status in our country, understand how they can use their privilege to support our immigrant neighbors.

In that training, I heard gut-wrenching stories of parents going to work to support their families, only to be pulled over without a driver license and deported from the country. My heart breaks for every family that experiences that. I can’t even imagine.

When that happens, one person loses nearly everything. But almost everyone loses something. A husband or wife loses a spouse. Kids lose a parent. Churches lose a congregant. Communities lose a neighbor.

And our businesses and our state as a whole also suffer as they lose another worker who contributes to our economy.

Did you know that undocumented immigrants in Michigan contribute about $86.6 million in state and local taxes to support state and local services? If you’re interested in learning more about immigrants in your area, the Michigan League for Public Policy has put together county fact sheets with information on local immigrant populations.

This data are one way to better understand Michigan immigrants and their contributions to our state and counties. But just like with all people, talking and interacting with immigrants is the best way to understand them.

That’s why I was proud to be a part of Movimiento Cosecha Grand Rapids’ Allies Training and participate in the 2019 Michigan Muslim Capitol Day last month. Members of the Muslim community across Michigan, including immigrants, came to Lansing to meet their elected officials, discuss important issues, attend House and Senate sessions, undergo trainings and participate in workshops. I was on a panel talking about building relationships with lawmakers.

While we may have different faiths, we share many of the same principles — especially compassion and care for one another. I was especially moved by talking with a group of eighth-grade Muslim girls. Their insight, intelligence and desire to be engaged in their government and public policy discussions gave me hope for the future. It was an important reminder of what my League colleagues and I fight for on a daily basis.

On May 1, marches in support of immigrants were held across the country, including Grand Rapids, Detroit and Kalamazoo here in Michigan. The marches here were coordinated by Movimiento Cosecha and called for driver licenses for all residents, regardless of immigration status.

While I was not able to personally attend, my church and others have been supporting the work of Movimiento Grand Rapids and contributed food, money and volunteers for the march there. We are trying to be faithful to the call to support immigrants.

And while that support is important, what we really need are policy changes to support immigrants in our state and country. There are about a dozen states that provide driver licenses, regardless of legal status. Michigan needs to join them.

Muslims and immigrants have often felt the sting of hateful rhetoric and divisive and punitive public policies, but that has grown even worse over the last few years. And that has meant that the League and others who advocate for accepting, welcoming and inclusive policies have been working harder than ever.

It’s a two-pronged, albeit imbalanced (not by choice!), approach. We play defense and push back on assaultive federal and state policies, like family detainment and separation, changes to the public charge rule, and efforts to make English Michigan’s “official” language.

In the League’s Owner’s Manual for Michigan, which lays out a plan to support all Michiganders, we highlight the need to support immigrants. This includes driver licenses for all and other policies such as Safe Zone Policies to protect immigrants.

I’m reminded of Mr. Rogers, who talked on his long-running public television show about being a good neighbor. Whether you’re driven by your faith, your job, your own family history or just common decency, we all need to be good neighbors to immigrants in our communities.

Karen Holcomb-Merrill: We must support our immigrant neighbors

by Karen Holcomb-Merrill, Michigan Advance
May 10, 2019

Karen Holcomb-Merrill is Chief Operating Officer with the Michigan League for Public Policy. Previously, she was Public Policy Consultant for Tobacco-Free Michigan and Executive Director of Common Cause in Michigan for 14 years.

In wake of Lyoya’s death, a reckoning with Grand Rapids’… by Anna Gustafson May 7, 2022
Here's the full text of Biden’s State of the Union address by Michigan Advance March 2, 2022
‘He’s doing their bidding’: Critics say Republicans use… by Anna Gustafson April 17, 2022