Gov. Gretchen Whitmer’s proposed state budget would increase Michigan’s Earned Income Tax Credit (EITC) from its current rate of 6 percent to 12 percent, something she says would add an additional $30 per month to low-income families’ pockets.

A recent working paper from a group of University of California researchers, however, says that it might have an unexpected and much more personal effect — decreasing the number of the state’s “deaths of despair,” a term used to refer to premature deaths by drug overdose, suicide or alcohol abuse among especially the economically struggling and less educated.

That paper, which its authors say is meant solely to “contribute to the debate” and cannot directly establish causality, nevertheless suggests through a careful examination of U.S. Centers for Disease Control and Prevention (CDC) and state-level data, that 10-percent increases in both the EITC and minimum wage could reduce non-drug-related suicides in that category by anywhere from 3 to 6 percent.

“When these policies change, they seem to be followed very quickly by a reduction in suicides,” Anna Godoey, a UC Berkeley economist and one of the paper’s co-authors, told the Advance.

The paper studied drug overdoses and suicides among Americans between the ages of 18 and 64 without bachelors’ degrees. The researchers chose to exclude alcohol-related deaths since they are largely caused by long-term habits and therefore less responsive to recent policy changes.

The most recent data from the CDC show that white Michiganders account for 88 percent of suicides, in keeping with the finding that “deaths of despair” have seen a marked increase among that demographic.

And 29 percent of Americans overall who committed suicide “faced a crisis in the past or upcoming two weeks,” while 16 percent had “job and/or financial problems.”

The Berkeley researchers found a stark difference in the effects of the economic policies they measured between those that were and were not drug-related, with the former being relatively immune to the additional income’s preventative effect toward suicides.

Godoey said that “what [the researchers] found was that high minimum wages and the state EITC didn’t affect drug related deaths, so the drug epidemic seems to not be driven by these policies.”

She added in an email to the Advance that although the study did not examine effects within individual states — assuming the effect of the increase is uniform across every state — one could apply the expected reduction in suicide rates to each state’s change in minimum wage policies. She took care to note, however, that “these estimates will have greater uncertainty compared to the national figures.”

According to the most recent data from the Kaiser Family Foundation, Michigan’s overall suicide rate nationally ranks somewhere near the middle of the pack, just one-tenth of a percentage over the national average of 14 per 100,000 people.

It’s been climbing at an alarming rate, however, by nearly 33 percent from 1999 to 2016 — almost the same span of time the Berkeley researchers examined to draw their conclusions about economic policy. 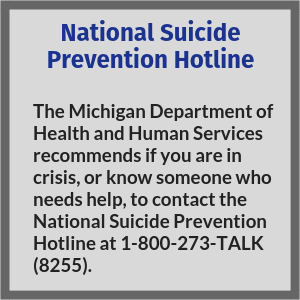 The term “deaths of despair” was coined in 2015 by Princeton researchers Anne Case and Angus Deaton in a much-cited study for the Brookings Institution that found drug overdoses, suicides and alcohol-related deaths were largely responsible for the increasing mortality rate for white Americans.

The Berkeley researchers measured suicides among not just white Americans, but those of other races, as well. They found that the rate of “despair”-related mortality for people of color has begun to catch up with their counterparts in recent years.

This tracks with recent work by a group of researchers including the University of Michigan’s Arline Geronimus, who argues that the “deaths of despair” defined by Case and Deaton are part of an overall trend of declining health in America.

In a December 2015 paper, Geronimus, along with her co-authors, found that Americans of all races with low levels of education “have lost significant ground in life expectancy in relative terms.”

She added that “as with recent findings on disparity in economic outcomes, mortality also appears to be trending toward greater inequality” — a conclusion that tracks with that of this new paper’s authors.

As for the state of specific economic policies that the Berkeley researchers say could reduce the suicide rate’s upward trend, Whitmer’s aforementioned doubling of the EITC is still on the table.

Last year’s minimum wage law — which sparked a partisan, procedural showdown in Lame Duck — is set to increase the rate from $9.45 per hour to $12.05 per hour over the course of the next decade.

The Michigan League for Public Policy’s legislative coordinator, Rachel Richards, described the effect that the EITC has on everyday life for working-class residents of the state, even in its currently diminished form. Gov. Rick Snyder cut the tax credit from 20 percent to 6 percent as part of his 2011 tax overhaul, which also decreased the business tax rate.

“The state EITC has this additional boosting power, especially when it comes to poverty reduction,” Richards said. “Back when the EITC was at 20 percent of the federal level, it, alone, helped pull about 22,000 Michigan families out of poverty, and at its current rate it still really helps, pulling more than 6,500 taxpayers out of poverty.”

The authors of the study on suicides noted that lump payments like that given out through the EITC have especially strong effects on behavior, even pointing out that the effects they discovered in decreasing suicides are relatively larger in March, the month in which many residents receive their annual tax refund.

The study also says that raising the minimum wage has a more immediate effect on reducing the number of suicides in a given state, whereas hiking the EITC has a naturally occurring delay until the next tax season.

Michigan’s recent delayed-release minimum wage hike was the result of a bitter clash between Democrats and Republicans over a ballot proposal that would have accelerated its increase, leading to a $12 minimum wage by as early as 2022.

A separate study by a group of University of North Carolina researchers last year found that “Increases in real minimum wages have been associated with slower growth in state suicide rates in recent years.” Their research showed that a $1 increase in the state minimum wage was correlated with an almost 2 percent decrease in its suicide rate.

State Sen. Jim Runestad (R-White Lake) is the sponsor of Senate Bill 228, which would create a suicide prevention commission in the state to study the causes of and potential solutions to its increasing suicide rate.

The bill passed the Senate unanimously on May 7. Runestad said that he looks forward to its passing the House in a similar fashion and, eventually, being signed into law.

He described the state’s growing number of suicides as a problem that demands individual solutions, and said that the new commission aims to involve some of the country’s top researchers in diagnosing them.

“Different demographic groups have individual needs that are not paralleling another group exactly, so the education and intervention has to be different,” Runestad said.

“We have some of the top research universities in the nation, and we’re asking that they cooperate, with all the state funding they get, with doing a Michigan study regarding what is happening within these demographics.”

The Michigan Department of Health and Human Services recommends if you are in crisis, or know someone who needs help, to contact the National Suicide Prevention Hotline at 1-800-273-TALK (8255).