Susan J. Demas: Damn, it feels good to have a feminist governor in charge

If you want to sum up what Gov. Rick Snyder’s eight years meant for Michigan women, you could go with: It could have been worse.

He vetoed some extreme anti-abortion legislation after two Democratic female lawmakers were silenced on the floor during what became known as “Vaginagate.”

And Right to Life of Michigan knew it could only push the Republican so far. That’s why the group eschewed a fight with him over banning dilation and evacuation abortion — although if the procedure is as appalling as anti-choice advocates say, wouldn’t there be a moral imperative to outlaw it as soon as possible instead of waiting until there was a Democratic governor to tangle with? (Insert hmm emoji here).

Anyway, Snyder signed plenty of terrible abortion restrictions, but didn’t go as far as some GOP governors. He also never seemed particularly concerned about women’s rights — his cabinet was overwhelmingly male during his tenure. But it’s safe to say that his horrible record on workers, LGBTQ rights and Flint is what most people remember.

Gov. Gretchen Whitmer has vowed to veto the latest anti-choice gambit. She’s only been in office less than five months and she’s hamstrung by a GOP-dominated Legislature with leaders who urge people to just ignore her executive directive on equal pay. (Aw, isn’t the governor adorable for thinking she has the power to set policy?)

But consider where we’re at.

We’re now living through a wave of extreme anti-abortion legislation sweeping the country, from an outright ban in Alabama to a six-week limit in Ohio where an 11-year-old rape victim now has to carry her pregnancy to term, which is not only morally repugnant, but medically dangerous.

It’s all designed to force the U.S. Supreme Court to overturn Roe v. Wade, which I believe will happen. 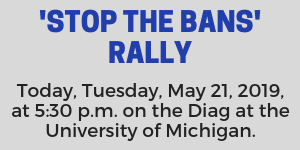 In Michigan, however, we have a governor who doesn’t just follow on women’s rights, like too many Democrats (cough) men. Gretchen Whitmer is a national leader. If you don’t believe me, watch her on MSNBC Monday when she refused to fight on anti-choice advocates’ ground.

“I think so many of these decisions are made in a vacuum with a bunch of men sitting around a table and deciding what a woman’s rights should be, what our access to health care should be — trying to control women by controlling our bodies,” Whitmer declared.

If you’re a woman who believes in the fundamental right to make your own health care decisions, knowing that it could be snatched away by a far-right, male-dominated court extremely soon, I don’t know how you can watch that clip without cheering. So many of us feel battered by the barrage of insanity coming from the White House (even just Donald Trump’s Twitter account), and sometimes, we just need a little relief for our psyches.

Whitmer was then asked about when she shared on the Michigan Senate floor her story about being raped. That was during a different debate on the “rape insurance” law banning abortion from being covered in standard private insurance plans (which was overwhelmingly backed by supposedly free-market Republicans).

The governor said during these debates, female lawmakers feel obligated to “go to the microphone and tell our most personal, sad, toughest stories because we want to put a face on this.

“It’s critical that people understand the real-world impacts of cruel, poorly informed laws,” she added. “This is not just an issue in a vacuum — this is about families and women and our rights and our autonomy.”

If you weren’t there in 2013, you might remember her speech coming up in 2018 when Republican nominee Bill Schuette’s campaign disgustingly used a photo from the day she disclosed her sexual assault in an attack ad since she looked angry. This somehow was not covered as a big deal (perhaps because the media power structure remains male-dominated and too credulous of GOP bad-faith arguments, but let’s not be too hasty).

But believe me, women noticed. And we were pissed.

At the beginning of the MSNBC segment, Whitmer thanked reporter Hallie Jackson, who should anchor all of the shows, for “highlighting this issue” because “it’s really important.”

This was the governor at her most natural and at her most persuasive. And I can say that, having covered her since her days in the state House. There are a lot of things Whitmer believes in, like building up schools and fixing the damn roads (you may have heard her talk about that), but her belief in the right for women to control our own bodies is just fundamental to who she is.

And lots of women like me can relate. My main gateway into politics was when a friend had an abortion at 15. She went on to earn all A’s through graduate school and met the right guy and now has a big, wonderful family. She deserved to have that chance to be the person and the mother she could be at the right time. And so does every woman.

So when progressives — who aren’t further left than me, but think they are — say reproductive freedom just isn’t as important as their issue, like the Green New Deal, or shrug that having women in office isn’t a big deal because every Democrat believes in choice, I feel their dismissiveness deep in my bones.

And I’m not alone.

Gretchen Whitmer can’t hold back the tide of anti-woman laws engulfing the country by herself. Neither can the many eminently qualified women running for president right now. But it means a lot to have them out there speaking truth and fighting for us.

Some days, it just feels damn good to have a feminist governor running our state.

Susan J. Demas: Damn, it feels good to have a feminist governor in charge