Michigan Department of Health and Human Services (MDHHS) Director Robert Gordon has stepped into his role at a time when the department faces crucial issues that affect Michigan’s rural and urban areas alike. 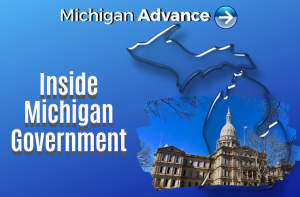 That includes addressing everything from lead and PFAS contamination in drinking water and implementing new work requirements for Healthy Michigan recipients.

In an exclusive interview with the Michigan Advance this month, Gordon discussed his health care background, the department’s current direction, the challenges it currently faces and what he thinks we can do about them.

It’s part of the Advance’s ongoing video series, “Inside Michigan Government,” interviewing key state department directors and taking you behind the scenes of your government and how decisions are made.

Originally from New York, Gordon took his first job out of Yale Law School representing children in abuse and neglect cases for the Legal Aid Society of New York.

Gordon also worked for the New York City public school system, designing funding systems aimed at more equitably distributing resources. He then went on to work for the administration of former President Barack Obama, at the Office of Planning, Evaluation and Policy Development.

“It was incredibly exciting to work in the Obama administration,” Gordon said. “I was there from the beginning, working for a new, amazing, historic president. And also working at a time of deep crisis for the American economy … It was a very smart, committed group of people working at a difficult time, it was an honor,” Gordon said.

His role was developing programs related to maternal and infant home visiting, teen pregnancy prevention and education investment. He also oversaw the Administration for Children and Families and the Administration on Aging at the Department of Health and Human Services.

“I think having a department this big is challenging, but I also think it’s a huge opportunity,” Gordon said. “I think there’s an opportunity to foster more cross fertilization, more learning across programs.”

The Healthy Michigan Plan dates back to 2013 during the Republican former Gov. Rick Snyder administration — something now-Gov. Gretchen Whitmer worked on in her former role as state Senate minority leader.

It’s a state-run program authorized by the Affordable Care Act (ACA) that expanded Medicaid benefits to those earning up to 133 percent of the federal poverty level.

“The Healthy Michigan Plan was a wonderful bipartisan achievement,” Gordon said. “Medicaid was expanded in Michigan under a Republican governor with a Republican Legislature.

“And because of that expansion, 680,000 more Michiganders have health insurance, they are getting more primary care [and] they are visiting the emergency room less. It has created tens of thousands of jobs in the state. It has added billions of dollars to the economy in Michigan. It is a tremendous success.”

The new law signed by Snyder requires that some Medicaid recipients provide proof that they worked a minimum of 80 hours in the last month. Failure to meet the 80-hour threshold for three months out of the year will result in the loss of health care coverage.

After a month of compliance, the individual will be allowed to re-enroll. The federal government approved the waiver to add this requirement last December, and the policy is set to take effect January 2020.

“The work requirements emerge from a goal that everyone shares, which is to foster independence for people when we can,” Gordon said. “But they do create tremendous risk that people will lose health insurance.”

Gordon said work requirements could result in 60,000 to 180,000 people losing their health insurance if not effectively implemented, based on a recent study by Manatt Health Strategies.

The study used data gathered after Arkansas began phasing in a similar requirement in June of last year. There, the work requirement resulted in 18,164 individuals losing their coverage due to non-compliance, and only 1,910 of those individuals applied for and re-gained coverage this year to date.

Arkansas’ health department also has reported that 13,373 individuals had failed to meet the work requirements during the first two months of this year.

“I think [a similar outcome] would be a devastating outcome for [Michigan] and for the people of the state,” Gordon said. “We are working to ensure an implementation that is as smooth as possible. And we will do everything in our power to do that. But at the same time, we are asking the legislature to make some changes to improve the implementation.”

Gordon said both he and Whitmer have spoken to legislators in both parties about changes easing the integration of work requirements. As it currently stands, people will need to call a designated reporting line to update the state on their hours worked, or to report them through an online portal.

Gordon also hopes to remove the reporting requirement for those who can show proof of regular employment. Currently, every person who is not exempt from the work requirement would need to report their hours on a monthly basis.

“In Arkansas, people who were working were not required to report because the state knew from employer provided data that they were working and compliant,” Gordon said.

“The way the statute was written [in Michigan], reporting would be required. We would like to change it to make it work the way it worked in Arkansas. That would be a simple change that would reduce the number of people that would have to call us every month.”

Gordon declined to say any further changes he and Whitmer may be proposing to the Legislature at this time.

“As terrible as the tragedy in Flint was, I think if you look at what’s happening now, it’s a source of hope,” Gordon said of the ongoing public health crisis in Flint.

“You do have folks, from every sector of the community, coming together, working with local public health, working with [DHHS], working with folks nationally to improve outcomes for the kids who were affected, and I think that there is great hope in that.”

Gordon said the plan for Flint is to make sure the programs put in place to help the community recover from the water crisis have everything they need to do their work.

According to DHHS spokesman Bob Wheaton, the department is “working on something that will be announced soon, but the specifics are still to be determined” with regard to addressing water issues in other areas across the state.

Health care for a lifetime

Another stated goal for Gordon, similar to his work in the Obama administration, is for DHHS to provide better opportunities for Michiganders across their lifespan. That begins with giving mothers access to better information, increased family planning services and in-home assistance for parents.

“We’re talking about infants, and reaching moms when they’re pregnant, and providing them with the support and knowledge and the information that they need … to do right by their kids. That’s something that can lead us to have healthier babies.”

Gordon specifically praised the Maternal Infant Health Program, which provides in home assistance and education to parents enrolled in Medicaid. He also wants to see more emphasis placed on keeping children with their families rather than becoming longterm wards of Children’s Protective Services.

Follow-up contacts with families occurring 12 months after case closure found that 88 percent of the families avoided out-of-home placement. More than 30,000 families per year receive prevention-focused home visiting in Michigan through such programs.

Gordon also wants to see more options provided to older Michiganders that would allow them to stay in their homes and communities for as long as they wish, including meal delivery and increased in-home services.

According to preliminary reports, Michigan’s Aging Network, which oversees those services, served 23,000 home care clients last year. More than 4,100 of them had limitations that meet or approach the criteria that would qualify them for nursing home care.

“I would love to see us deliver services to families and children in Michigan in a way that is as dignified and humane and efficient as possible,” Gordon said. “I think we often forget that we are working with people at very difficult times in their lives.”

Gordon also wants to place an emphasis on empowerment and not just day-to-day sustainability.

“I would love to see the services we provide, not just help people get by, but to help them get ahead,” he said. “To move from a safety-net concept to a springboard concept.

“I think we can and should be working to reduce poverty in Michigan and we have the opportunity to do that.”

Casey Hull is a freelance photographer and videographer. He was a reporter for the Capital News Service at Michigan State University.

‘This could set women back generations’ by Anna Gustafson April 7, 2021
After being reshaped by extremism, Houghton County… by Todd A. Heywood March 10, 2021
In Benton Harbor’s water crisis, a long history of… by Anna Gustafson October 26, 2021