U.S. Sen. Elizabeth Warren (D-Mass.) appeared in Detroit and Lansing Tuesday as part of a presidential campaign swing through the Midwest in which she unveiled ambitious new plans to overhaul the nation’s economy — and attempt to save the planet from climate change in the process.

As part of her plan for what she calls “economic patriotism,” Warren announced her goal of creating a new “Department of Economic Development.” That would be aimed at job growth, promoting monetary policy that would purposely weaken the dollar in an effort to reduce the trade deficit, and massively increasing levels of funding for research and development programs outside of their traditional geographic clusters.

“Climate change poses a survival threat,” Warren said in beginning her speech at Lansing Community College. “In order to fight back against that threat, we’re going to need all of the research, all of the innovation, and all of the manufacturing of good green products to help us turn around climate change, and that’s why I’m here in Michigan.” 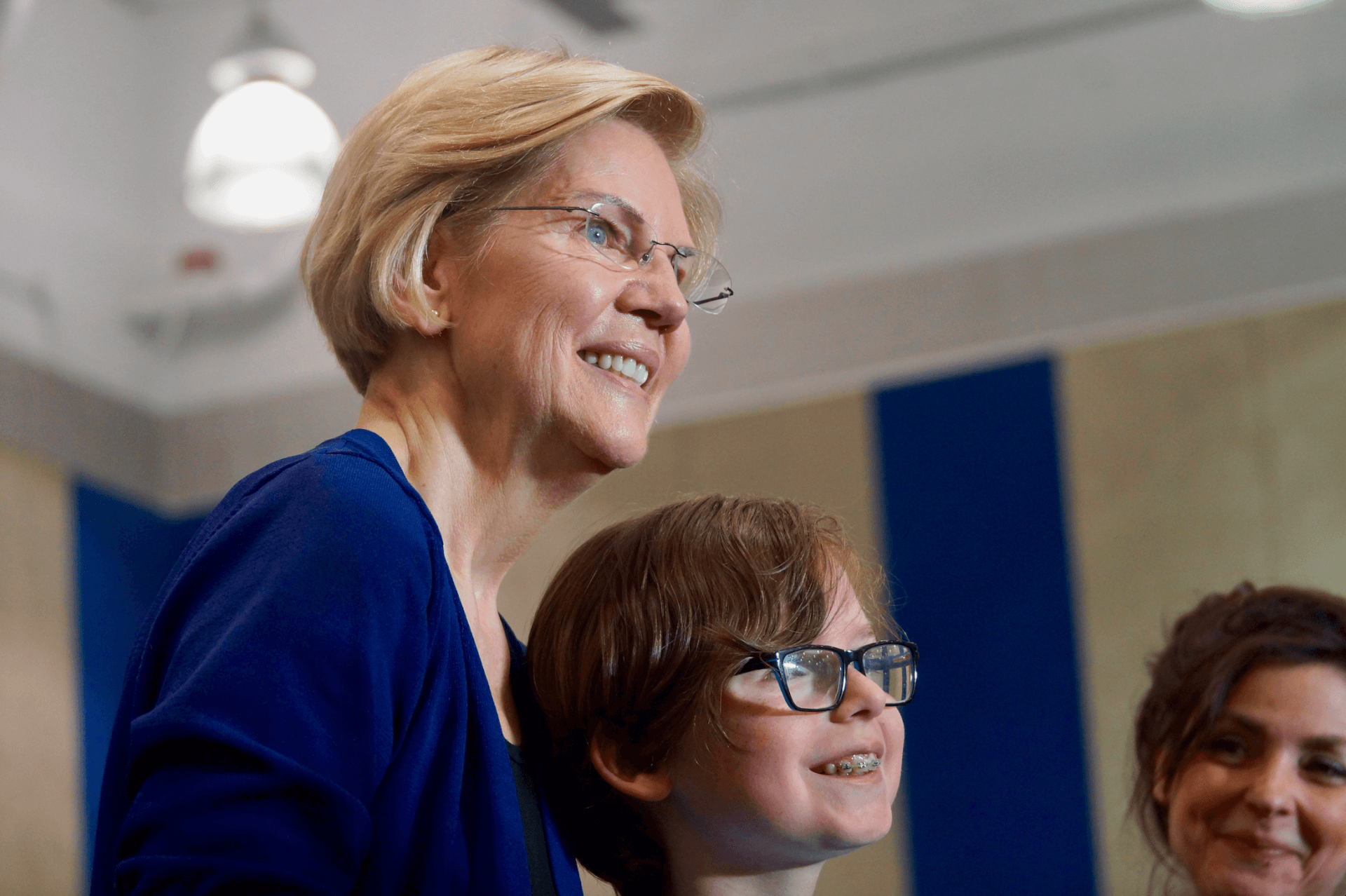 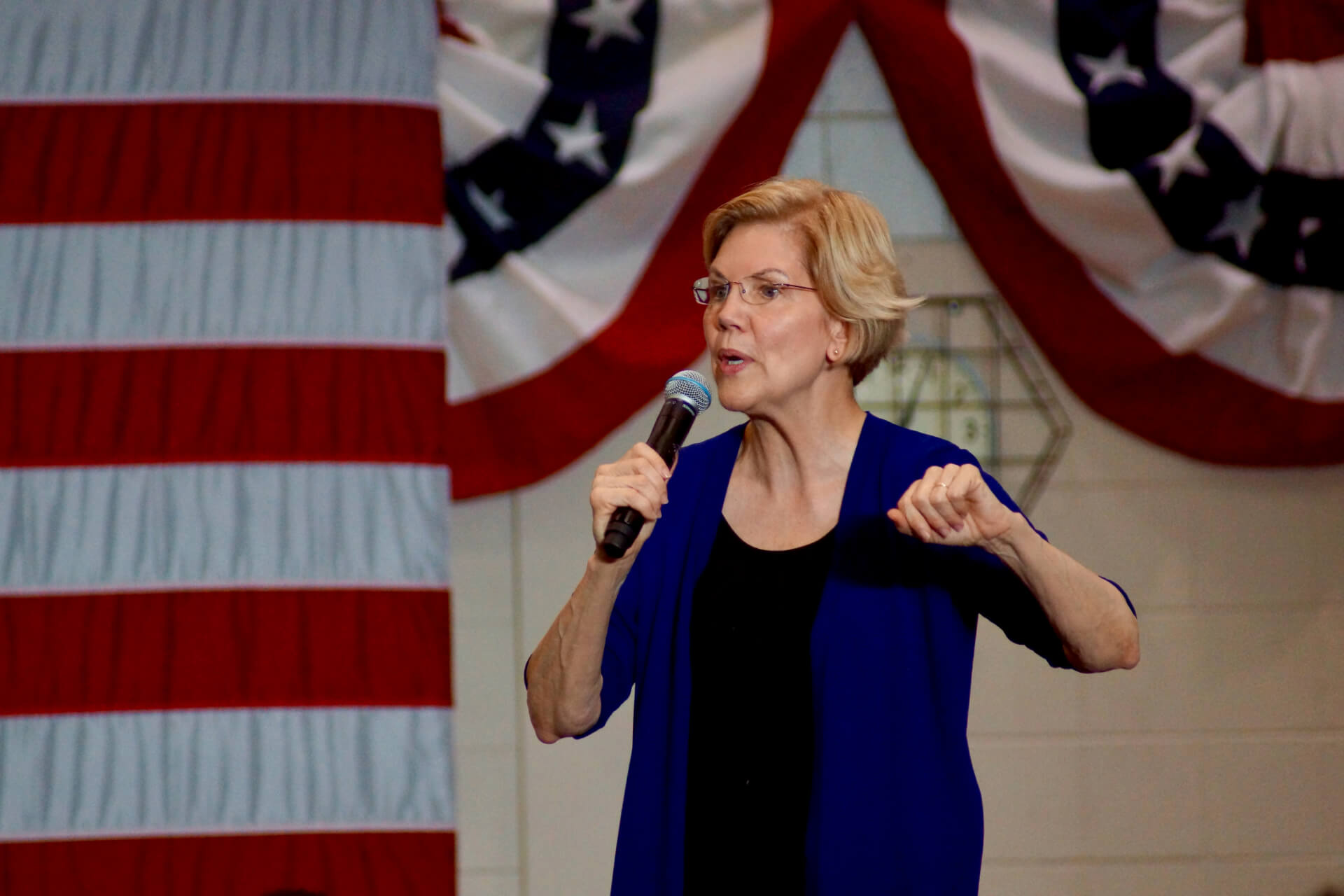 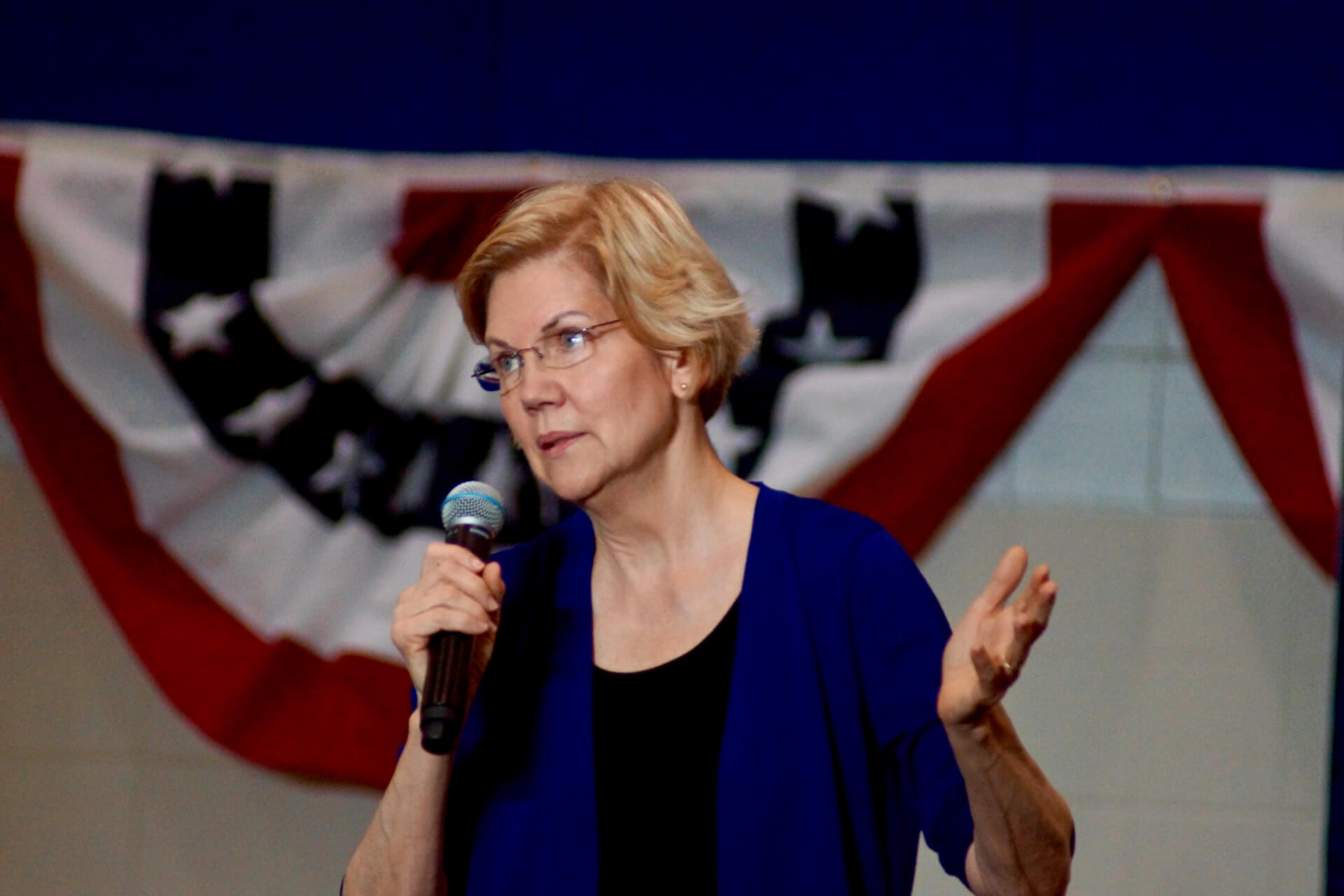 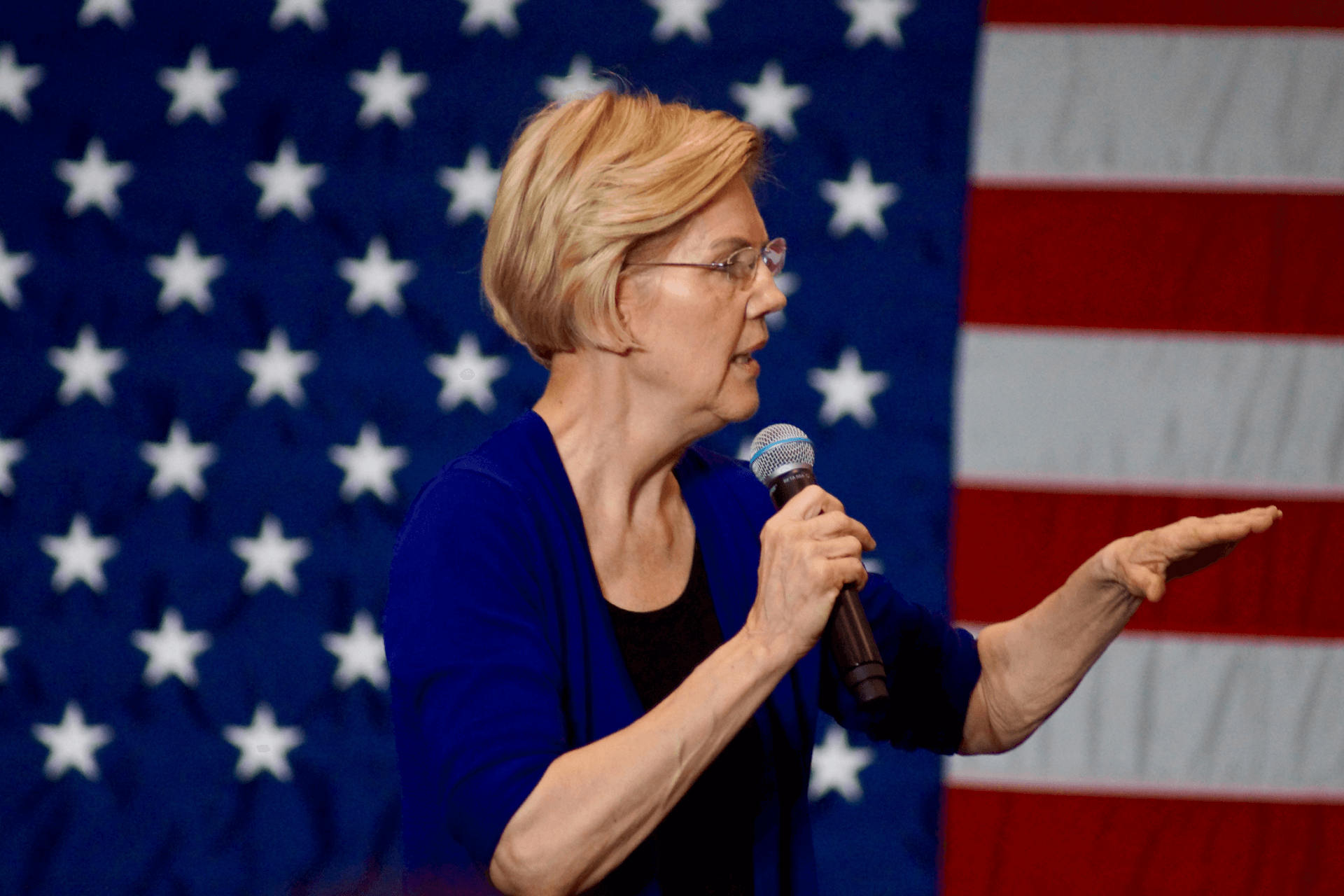 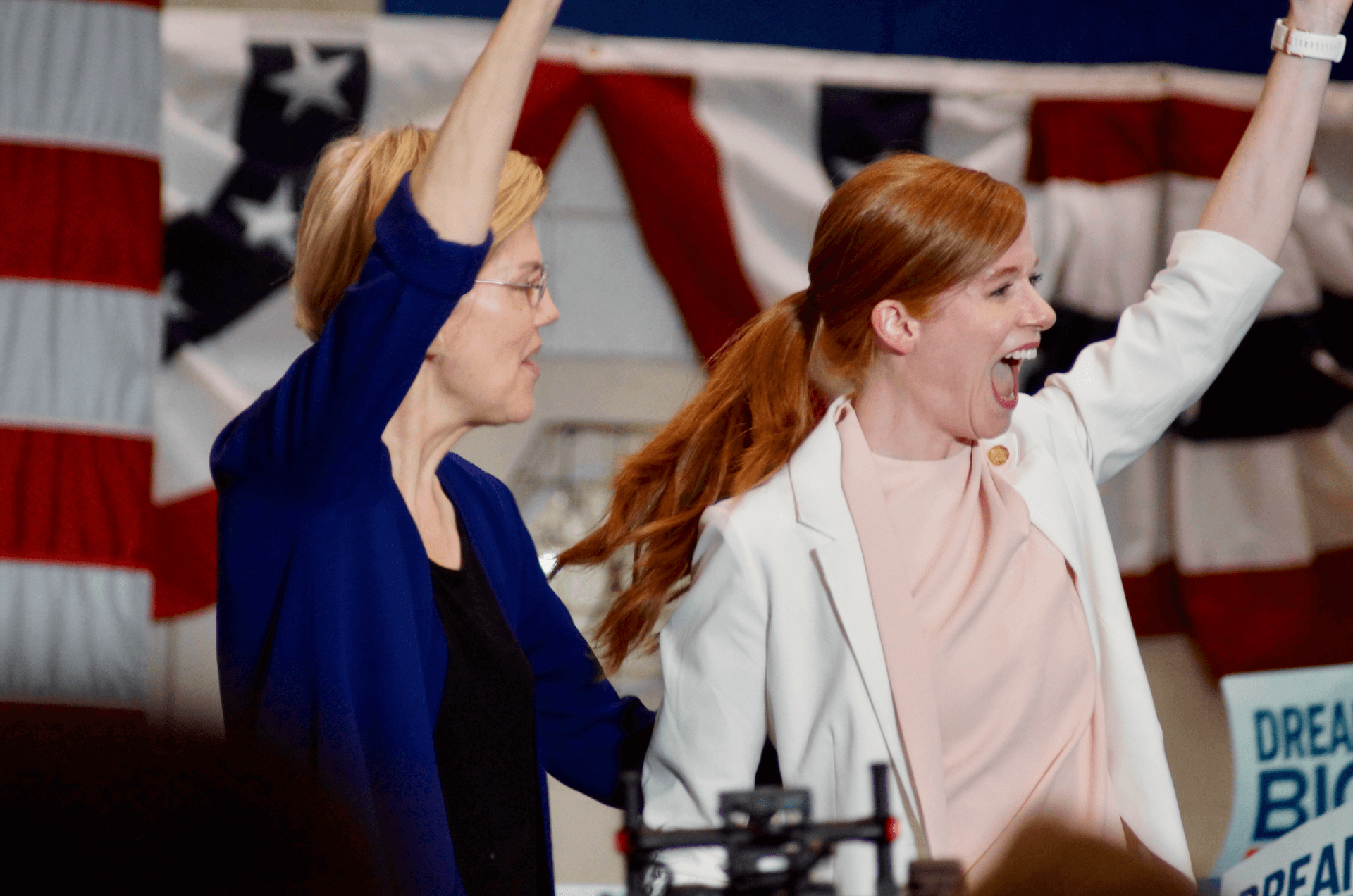 Warren last week announced her Midwest trip, which includes a Wednesday stop in Elkhart, Ind., amid a steady climb in polling that now shows her much closer to the top of the crowded Democratic primary field than she once was. Warren now consistently polls third behind front-runners former Vice President Joe Biden and Sanders in the RealClearPolitics polling average.

Tuesday’s announcement, expansive even by the standards of Warren’s sweepingly targeted, policy-heavy campaign, is aimed squarely at strengthening American manufacturing and trade interests. Warren said her efforts would create the global demand for “$1.5 trillion in purchasing over the next 10 years” that will be “100 percent ‘Buy American.’”

Her plan includes a total investment of $2 trillion over 10 years, an amount that she said Tuesday in Detroit would “create more than a million good jobs here at home.”

Warren’s “Green Industrial Mobilization” proposal would mandate that all companies receiving federal contract money pay their employees $15 an hour and provide 12 weeks of paid parental leave. Companies also would have to stay out of union organization drives.

Republican National Committee spokesperson Michael Joyce released a statement Tuesday railing against her progressive laundry list of policies, saying, “Elizabeth Warren’s support of absurd plans like giving the government control of healthcare, jobs, and education shows just how out of touch she really is with everyday Michiganders.”

Warren was introduced by state Sen. Mallory McMorrow (D-Royal Oak), who described how Trump’s victory in Michigan impacted Democrats and vowed to work to turn the state blue again in the 2020 presidential election.

“Michigan is a microcosm of the rest of the country,” McMorrow said.

She also recalled her own decision to seek office in 2018 and she said her November win earned her an encouraging phone call from Warren.

Members of the diverse crowd of 1,700 that showed up at LCC to hear Warren’s pitch Tuesday specifically cited their enthusiasm for her emphasis on policy, but acknowledged there’s a long way to go until the end of the 2020 primary campaign.

“I wanted to go and hear her speak and see more about what she’s doing on the campaign trail, because I want to vote for her,” said Katelyn Maddock, a 25-year-old therapist from Lansing who said she’s followed Warren’s career since her 2012 election to the U.S. Senate.

“The fact that she has concrete policies that she’s citing, it’s like, ‘What am I going to do about this problem? Here’s the solution,’ not just, ‘This is a problem.’”

Answering a question from a supportive audience member who feared ultimately resigning himself to voting for Biden in the 2020, Warren said advised those in his position to “put [their] worry to work.

“The system now for this Democratic primary, it’s us. It’s you; it’s me; it’s that woman in the back; it’s the mom over here with the kid; it’s all of us. And it’s going to come down to all of us,” Warren said. “I don’t want to be the America of 10 years back, or 20 years back, or 30 years back. I want to build a better America.”

During the rest of her stump speech, Warren advocated for her other signature policies, including access to free college, an increased wealth tax, and universal child care, before concluding by connecting her program of economic reform to her own background in rural Oklahoma.