I tried to interview Sen. Peter Lucido. He told me a group of schoolboys ‘could have a lot of fun’ with me.

I waited outside the Michigan Senate chamber to ask Sen. Peter Lucido (R-Shelby Twp.) on Tuesday for a comment about the Detroit Metro Times’ story reporting that he was a member of a violent, anti-Gov. Gretchen Whitmer Facebook group, which has since been deleted. 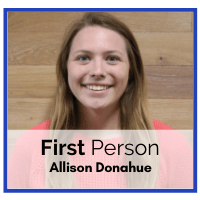 What was meant to be an opportunity for Lucido to respond to the report, turned into him making comments that objectified and humiliated me in front of a group of young boys.

After the Senate session ended and the chamber cleared out, a line of about 30 boys from Lucido’s alma mater, De La Salle Collegiate, an all boys’ Catholic high school in Warren, stood in front of the Senate doors.

I asked Lucido for a moment to address the issue at hand, and he told me he would catch up with me after he was finished honoring the group of students.

As I turned to walk away, he asked, “You’ve heard of De La Salle, right?”

I told him I hadn’t.

The teenagers burst into an Old Boys’ Network-type of laughter, and I walked away knowing that I had been the punchline of their “locker room” talk.

Except it wasn’t the locker room; it was the Senate chamber. And this isn’t high school. It’s my career.

I’m 22 years old and one of the youngest current Capitol reporters. The senator’s insinuating comments about the “fun” I might have with a group of teenage boys was belittling and it came from a place of power.

Lucido is positioned as a leader in the state Senate. He is the Senate majority whip, serves as chair of both the Senate Judiciary and Public Safety, Advice and Consent committees, and the Joint Committee on Administrative Rules, and is a member of the Senate Elections and Oversight committees.

Lucido has been a state senator since 2019, and served two terms in the House of Representatives from 2015 to 2018. Prior to his career in politics, Lucido founded a Macomb County-based law firm and Macomb Now Magazine.

Now he is entertaining the idea of running for governor in 2022. He told reporters on Michigan Public Television’s “Off the Record” that he could beat Democratic Gov. Gretchen Whitmer in a gubernatorial debate.

I waited out in the hall while he took photos with the students, even more determined to complete the job that I had originally showed up to do at the Senate that day.

Lucido returned to the spot where he had first met me 30 minutes earlier and I got my chance to ask him about the Facebook group, to which he gave an impassioned answer — which I will get to in a moment.

Before I let him walk away, however, I knew I needed to speak up about the comment he made to me earlier. The situation made me embarrassed, it made me feel small and it made me want to walk away from the Capitol and tell my editor that Lucido wasn’t available to comment.

But I’ve stayed quiet before. I’ve been the subject of locker room talk before, and laughed it off with all the boys in the room. I’ve been convinced not to report an instance of sexual assault because of the trouble the man would get into, and I never said anything. There have been too many moments, big and small, that I wish I would have told someone or spoken up about.

I’m not saying this is the same situation and I’m not saying I’m a victim in this. But the 15-year-old girl in me, who didn’t know how to advocate for herself then, was telling me to do it now.

At the very least, I wanted to give Lucido the chance to take it back and apologize. He did not.

“I also wanted to make a comment,” I said, my voice shaking. “I thought the comment that you made was unprofessional in front of the group of boys, saying that I would have fun with them, I don’t know what you were insinuating, but— ”

Lucido cut me off.

“De La Salle, I went there, and it’s an all male school and anytime we had dances we had to invite the girls over for dancing or socializing, it’s very awkward for a lot of these boys,” he said. “So if you took it any way other than that. … The fact that they have Regina school, an all girls’ school, get together. They do this, and they have dances and they have social days. It was awkward for me when I went to college and I first met a woman, I didn’t even know how to act around a woman.”

“Yeah, I was just saying I’m at work,” I told him. “And you wouldn’t have said it to any of my male colleagues or anyone who presented to be older than I am.”

But he assured me it was nothing personal and this is just how he talks to young women.

“I said it to an all girls’ school last week, ‘How would you like to have all the boys from the Senate come over?’” he recounted. “It was nothing disingenuous. It was no harm.”

Maybe he truly means that he never intended to cause harm with his comments, but that doesn’t excuse how we normalize this behavior from men in power.

I didn’t set out to write this story when I showed up to the Capitol Tuesday morning. I didn’t really want to write it after I left. I didn’t want to become the subject in my own writing.

But it mattered to me that I wrote this, because maybe Sen. Lucido, and likely many other men in power, will think twice about making comments like this anymore to the young girls who visit the Capitol on a field trip, or the female reporters who are there to get a quote for a story or their female colleagues who are there to do their job.

Whitmer: ‘Rational conclusion’ that sexism was a factor in campaign coverage

When I got to work this morning, I just wanted to write a story on Lucido’s involvement in a right-wing Facebook group. So here it is:

Lucido says involvement in Facebook group is ‘their crap, not mine’

An anti-Gov. Gretchen Whitmer group on Facebook, with posts about graphic violence against Democrats, anti-Muslim rhetoric and degrading comments about women, had over 9,000 members, including Sen. Peter Lucido (R-Shelby Twp.), according to reporting from the Detroit Metro Times.

The group was started with the intention to serve as a community for constituents who disagreed with the governor and to “stand up against Whitmer,” the Metro Times reported.

Lucido shared at least seven anti-Whitmer posts since Nov. 29, according to the story, which he stated criticized her policy.

“My involvement was six videos that were posted regarding the issues of vetoes,” Lucido told the Advance on Tuesday. “In addition, the fact that people talk crap back and forth on that page, that’s their crap, not mine. … If those people are talking cowardly and inciting violence, then they should be dealt with accordingly. But don’t lump anyone in with a group of people. Otherwise, you never gave them a chance.”

Lucido says he does not condone any violence of any kind.

The Facebook Group, “People vs. Gov. Gretchen Whitmer” has since been deleted.

I tried to interview Sen. Peter Lucido. He told me a group of schoolboys ‘could have a lot of fun’ with me.