‘I’d be embarrassed if I were her’: Republicans keep slamming Whitmer’s old gas tax plan

Gov. Gretchen Whitmer said her State of the State address would be “shorter than usual” — and it did clock in at about 35 minutes.

But in that time, she announced several big plans for the state and took a few swings at Republicans who control the Legislature. Focusing on roads, education, jobs and health care, Whitmer’s biggest announcement Wednesday was a plan using state road bonds to fix the roads.

“My ‘Rebuilding Michigan’ plan is financed without an increase at the gas pump, and it will do three things: save time, save money and save lives,” Whitmer said. “Since it doesn’t require the Legislature to act, we can get started right away.”

Homelessness increases across the state, especially for senior citizens, families

This plan negates the need for Republican approval, which her March 2019 proposal to raise gas prices by 45 cents per gallon, failed to do.

The state can’t wait any longer to fix the roads, Lt. Gov. Garlin Gilchrist said after the address. He said it’s not just a series of small repairs that take place over time. There are roads that need to be completely rebuilt. Although Gilchrist said bonds are needed now, more needs to be done.

“This does not fix the problem; we still need to work with Republicans to do that,” Gilchrist said. “We hope that they will come to the table and realize how important it is, but the message to the residents in Michigan is very clear: You pull out of your driveway on a county road and it still messes up your car, you still have to sit in a waiting room, you can call the Republican Party while you’re there waiting and ask them to do something to fix it.”

Republican legislators said they don’t deserve blame for the impasse over road funding.

State House Speaker Lee Chatfield (R-Levering) called the governor’s jabs at the House Republicans a “revisionist history,” saying Republicans tried to collaborate and pass a plan that would have redirected the 6% sales tax on gas from schools to road repairs.

“We tried to meet her in the middle, she refused to work with us and it was 45 cents or bust,” Chatfield said. “At the end of the year, she vetoed hundreds of millions of dollars in road funding because it wasn’t her 45-cent gas tax.” 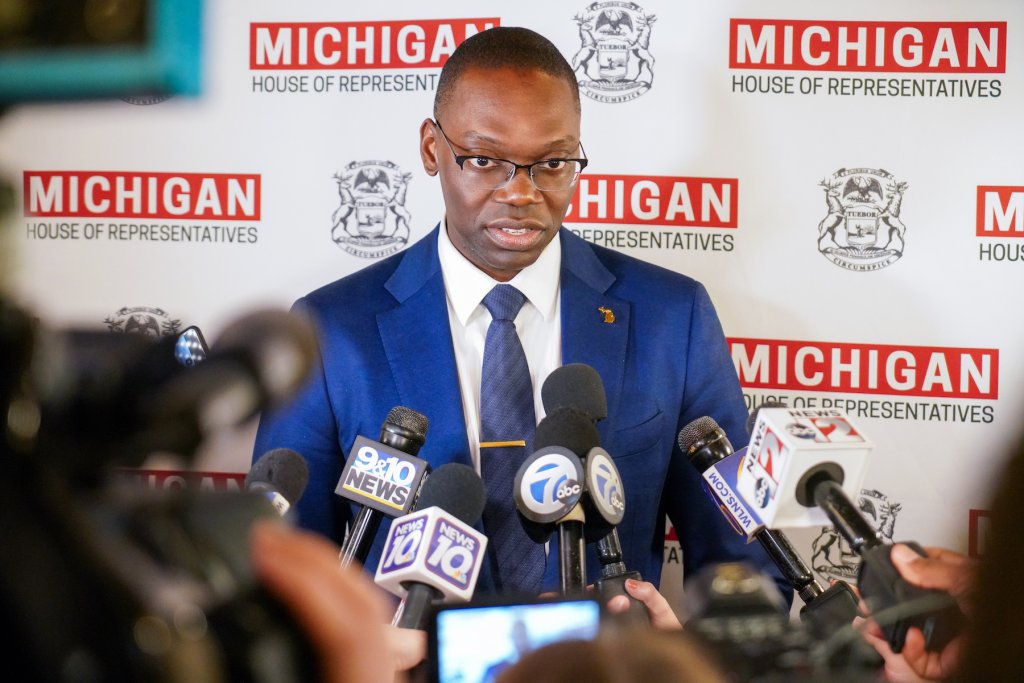 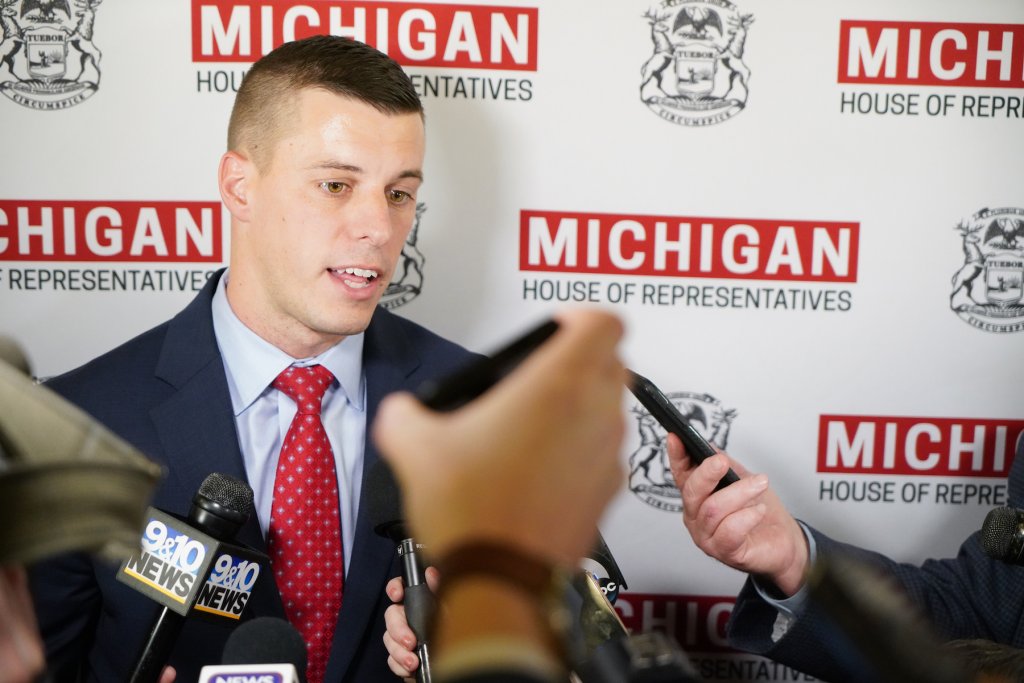 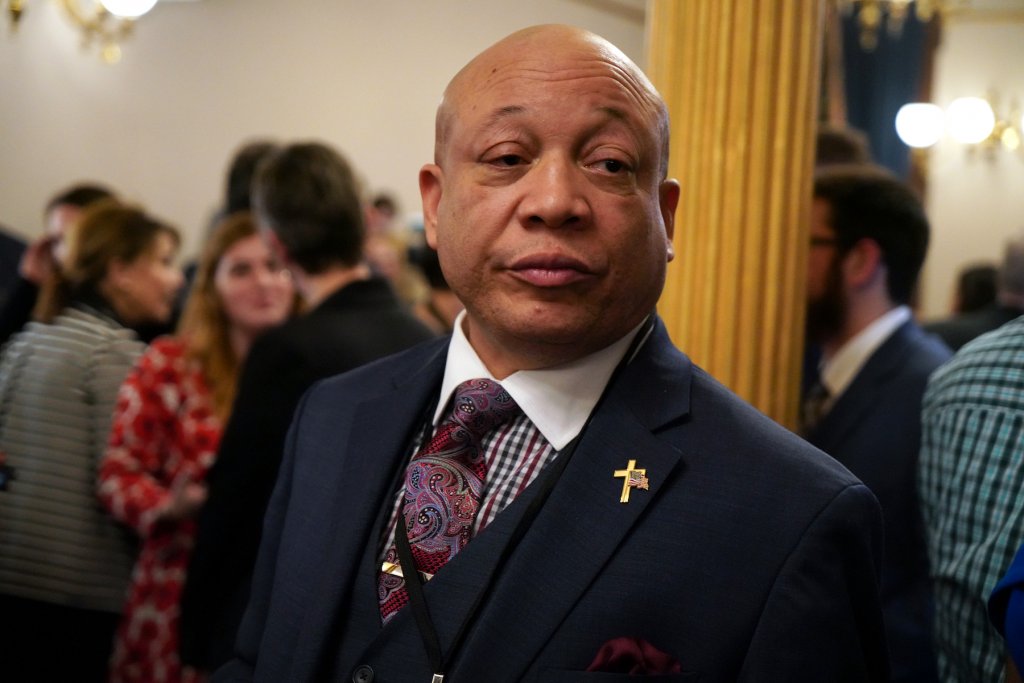 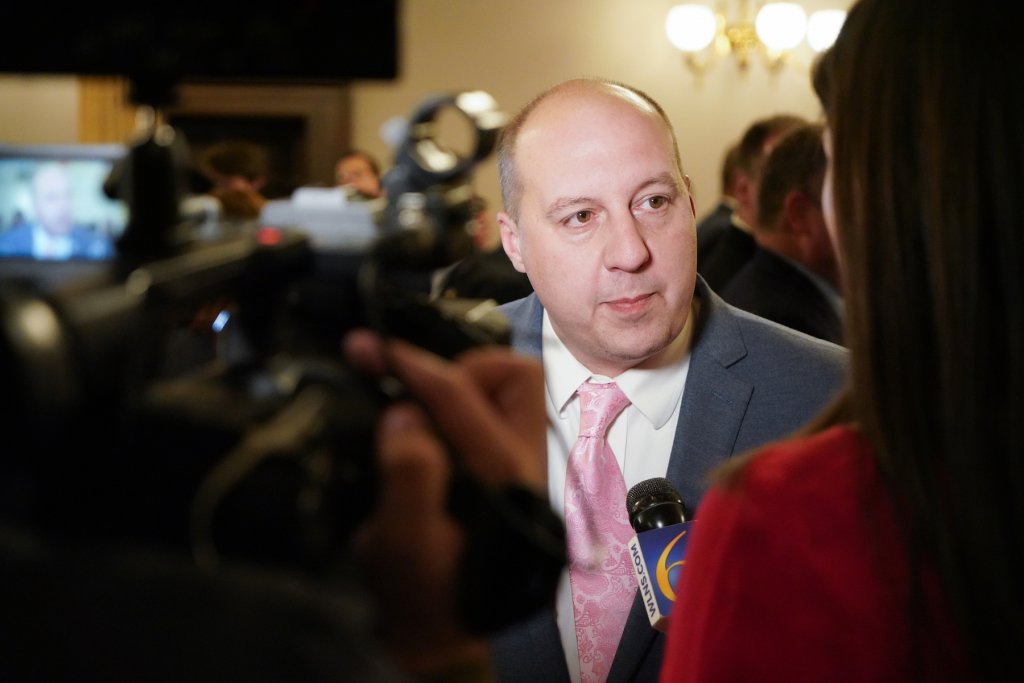 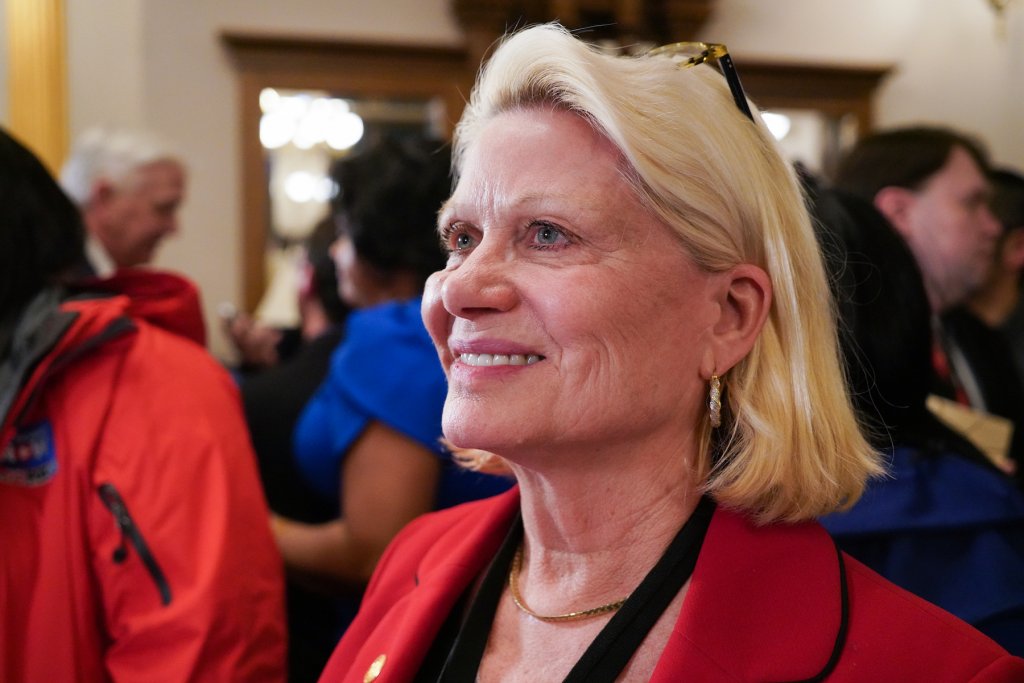 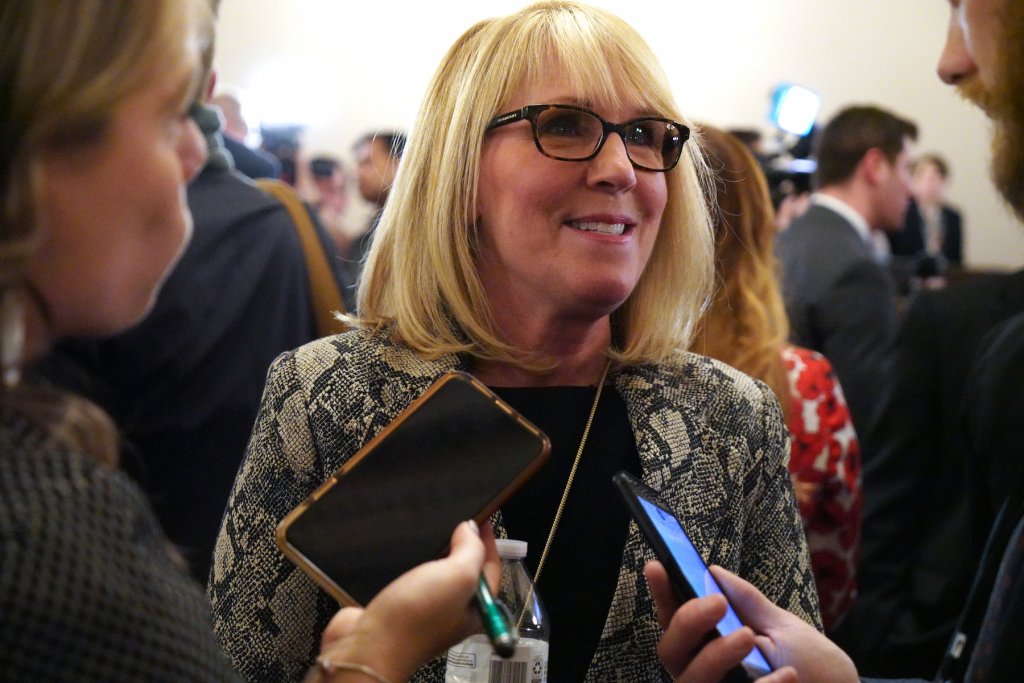 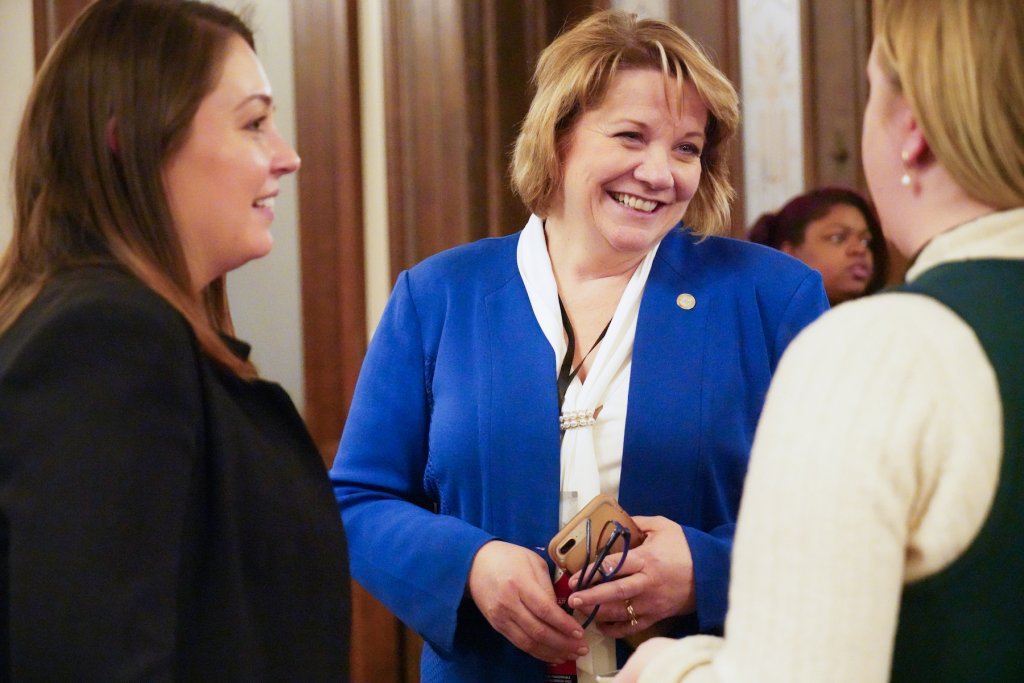 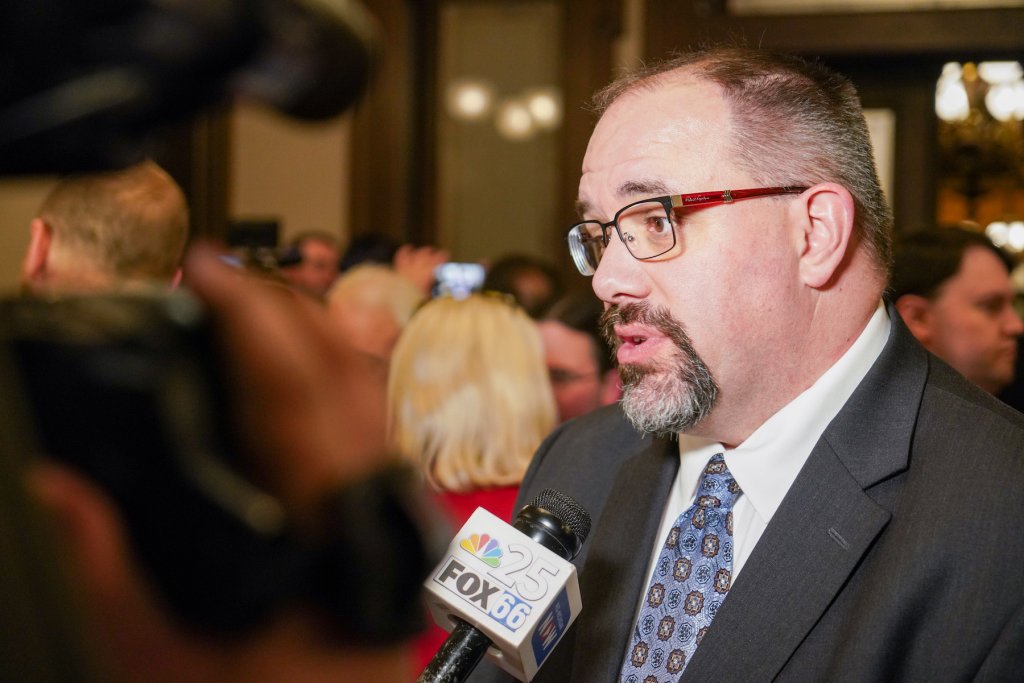 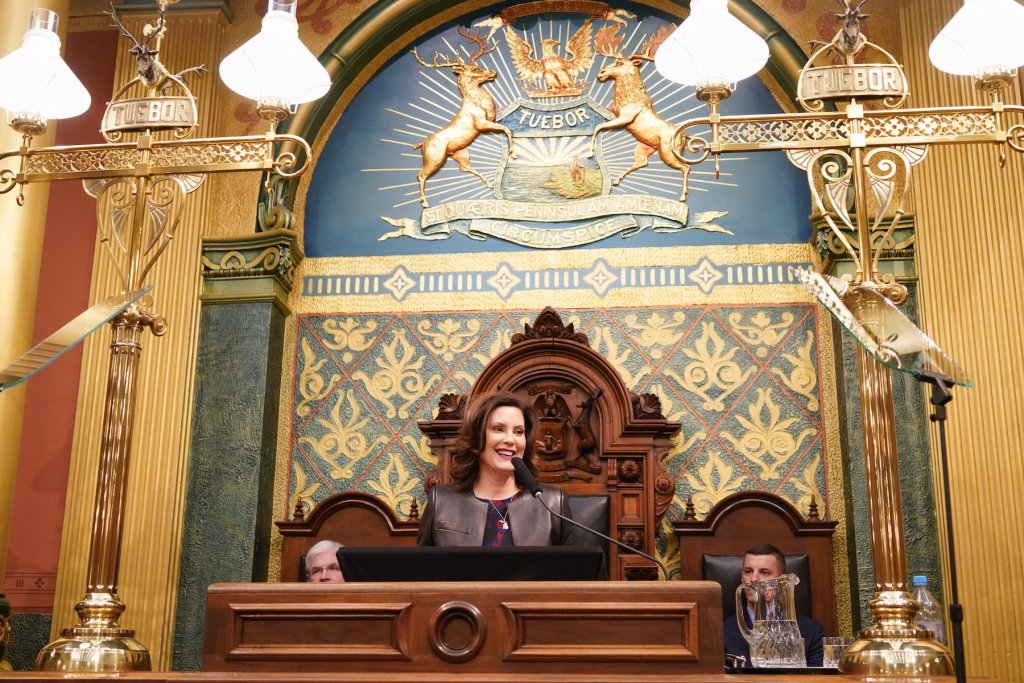 Whitmer’s address included positives that have happened in the state in the last year, like tripling the number of literacy coaches in the state and announcing 11,000 new auto jobs since taking office. But her comments that Republicans have not “followed suit on tough issues in order to move Michigan forward together” did not sit well with some in the GOP.

State Sen. Tom Barrett (R-Potterville)* said he felt Whitmer’s speech was a “bit disingenuous” and creates a false narrative that Republicans refused to work with her, when she failed to garner support for her gas tax increase.

“She’s got a whole party of supporters on her side that were too chicken to even introduce the bill for the 45-cent gas tax,” Barrett said. “It wasn’t us telling her ‘no’; it was her party — not a single one of them had the courage to introduce it. To me, that’s not a serious proposal. You’re the governor of the state, the leader of your party, and you can’t get a single member to even introduce your biggest priority. Like, I’d be embarrassed if I were her.”

Democrats ought to have the courage to stand up for their convictions and put their name on a bill or sponsor it, if they’re interested in improving the roads, Barrett said.

But some Democrats maintained that the governor made the right call to go the executive action route, since Republicans don’t want to work with her on big issues,

“I’m glad to hear the governor say she is tired of waiting around. I’m tired of it and so are most Michigan residents,” said state Rep. Kara Hope (D-Holt). “We can’t wait for action on roads, education or health care. the governor is taking bold action without waiting for leadership in the Legislature to get serious.”

At the moment, Michigan ranks as one of the worst states for overall literacy. Whitmer expressed her concerns about the state of early literacy and outlined her plans to supplement schools’ ability to fund extra help for struggling students.

In a city like Kalamazoo, where students who graduate from the public school system have a chance to have their full tuition paid for through the Kalamazoo Promise, it’s important that they get a shot at the opportunity, state Rep. Jon Hoadley (D-Kalamazoo) said.

“We’ll help kids go to college — we’ll pay for that — but we’ve got to make sure they’re ready to go,” Hoadley said. “We have to move away from the one-size-fits-all model of funding our students. We have to move towards equity and recognize that certain students are going to cost more money, but we need to invest in them so we can really level the playing field for opportunity.”

Whitmer announced that she’s launched the “Governor’s FAFSA Challenge” where high schools with the highest rates of filling out the FAFSA can win prizes. The top school earns $10,000.

Hoadley said he frequents schools during March Reading Month and he’s going to be adding “Fill out the FAFSA February” to his agenda.

In addition to taking care of the state’s young students, Whitmer said it’s time to help the mothers of those students. She has a health care plan for low-income women extending postpartum care from 60 days to one year after giving birth.

State Rep. Donna Lainski (D-Scio Twp.) said it’s a simple change, but makes an incredible difference for mothers suffering from postpartum depression or trying to heal from difficult or traumatic birth. She said taking care of mothers allows those families to thrive.

“It really is shameful as a state at how high they are and particularly for our residents who are mothers of color,” Lasinski said. “When we think about the horror of losing a mother soon after birth, or as a pregnant mother, it’s just unacceptable today.”

“When you look at women across the state and you see that women in poverty have much worse outcomes than women who are not impacted, for something that is so basic as giving birth, it’s really important for Michigan to provide adequate access to health care for everyone, including moms — especially moms and children,” Brixie said.

‘I’d be embarrassed if I were her’: Republicans keep slamming Whitmer’s old gas tax plan

‘This could set women back generations’: The… by Anna Gustafson April 7, 2021
‘It’s become toxic’: Houghton County wrestles with… by Todd A. Heywood March 8, 2021
Black lawmakers warned of extremism and white… by Allison R. Donahue October 20, 2020