It was half a word — “tick” — that landed U.S. Sen. Amy Klobuchar (D-Minn.) the loudest cheers of the morning as she campaigned for Democratic presidential candidate and former Vice President Joe Biden in Grand Rapids.

“I could not think of a better way to end my candidacy, as hard as that was to do with our beloved staff and everyone else, than to join the tick—” Klobuchar said on Saturday, trailing off as audience members erupted into cheers upon believing her to be saying, “ticket.”

“Amy! Amy! Amy!” they began to chant, some dropping their Biden campaign signs in order to stand and clap for the former Democratic presidential candidate.

“I was going to say, ‘To join the terrific campaign of Joe Biden,’” said Klobuchar, who ended her presidential campaign on Monday and whose name has surfaced as a potential vice presidential contender.

It was a moment seemingly emblematic of a crowd that planned to vote for Biden in Michigan’s Democratic primary on Tuesday, but was often more passionate about now-former candidates who populated what was once the most diverse presidential field in Democratic history. With a record number of women once running in it, the primary race now consists of Biden, U.S. Sen. Bernie Sanders (I-Vt.) and U.S. Rep. Tulsi Gabbard (D-Hawaii).

“I love Joe, but I wish I could vote for Amy; I would love to see a woman on the ticket,” said Emma Curcuru, a senior at Northern High School in the Forest Hills Public School District. 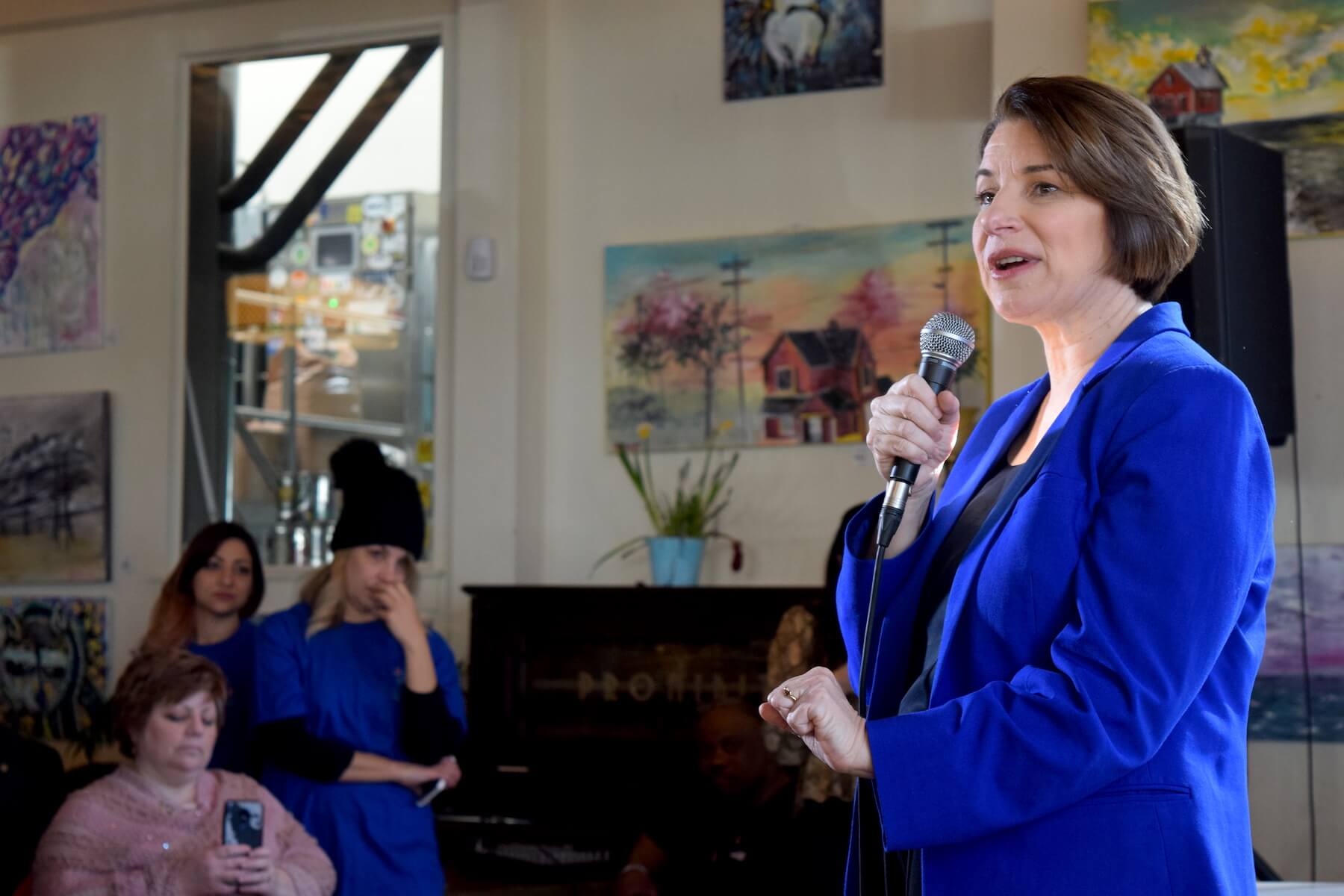 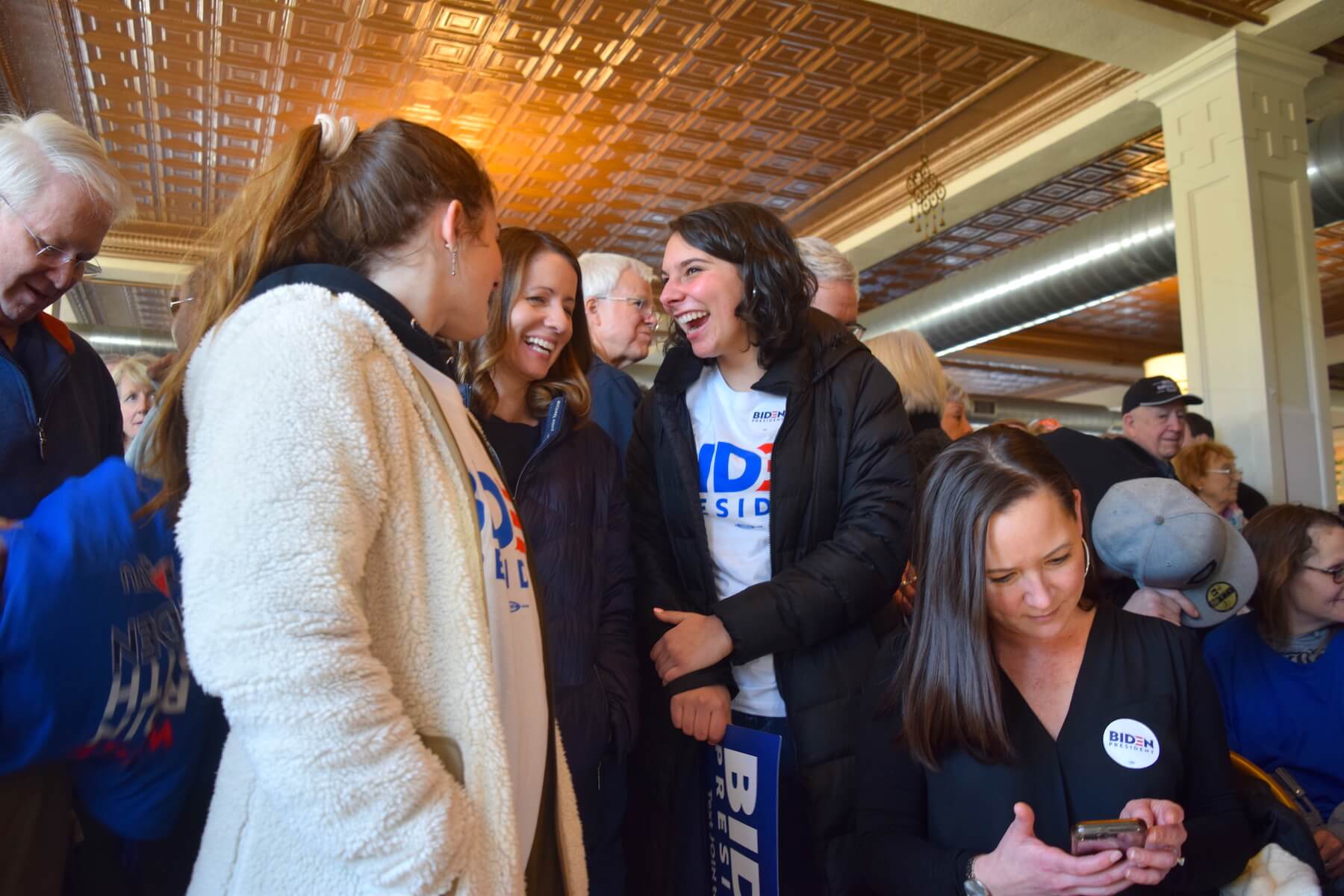 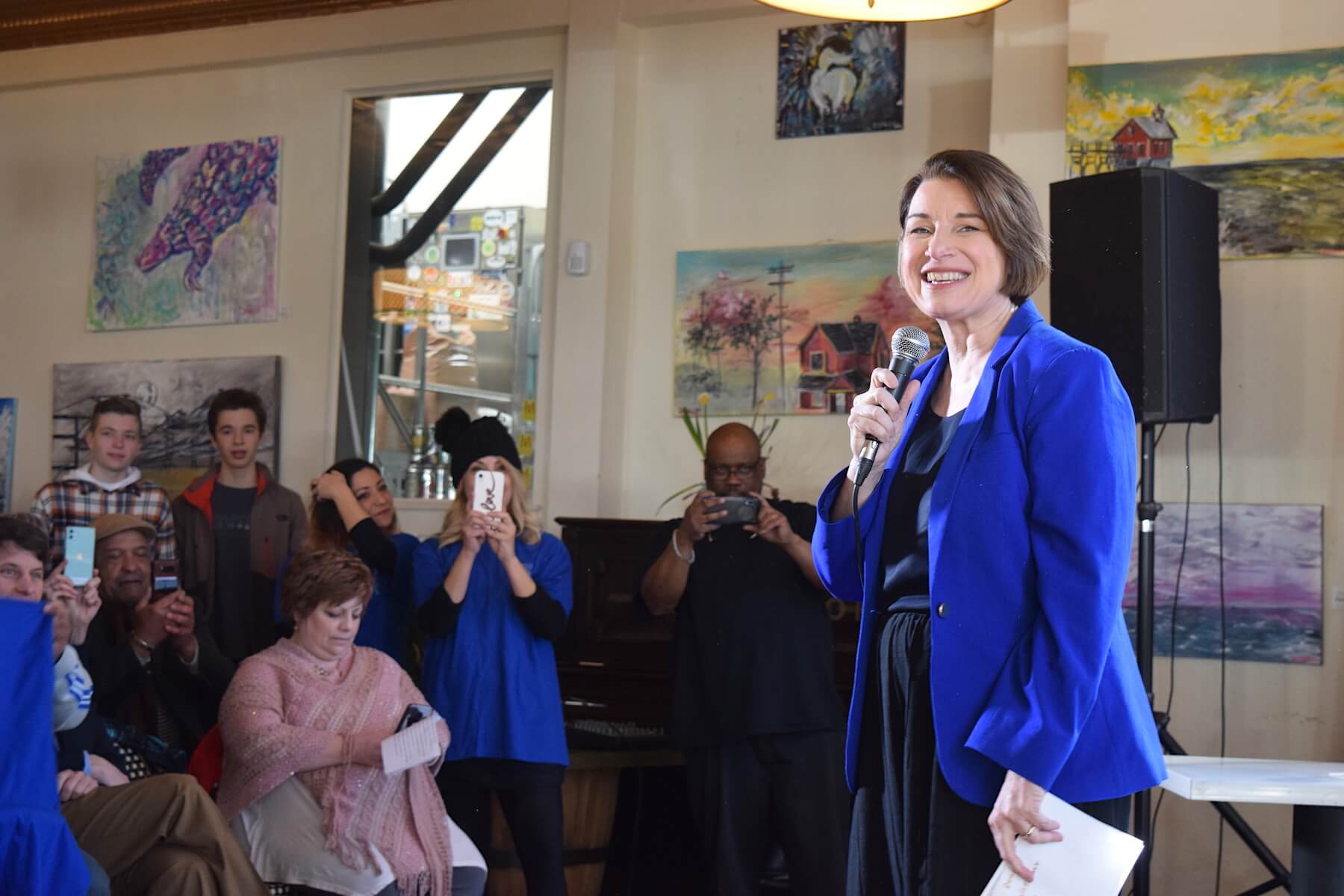 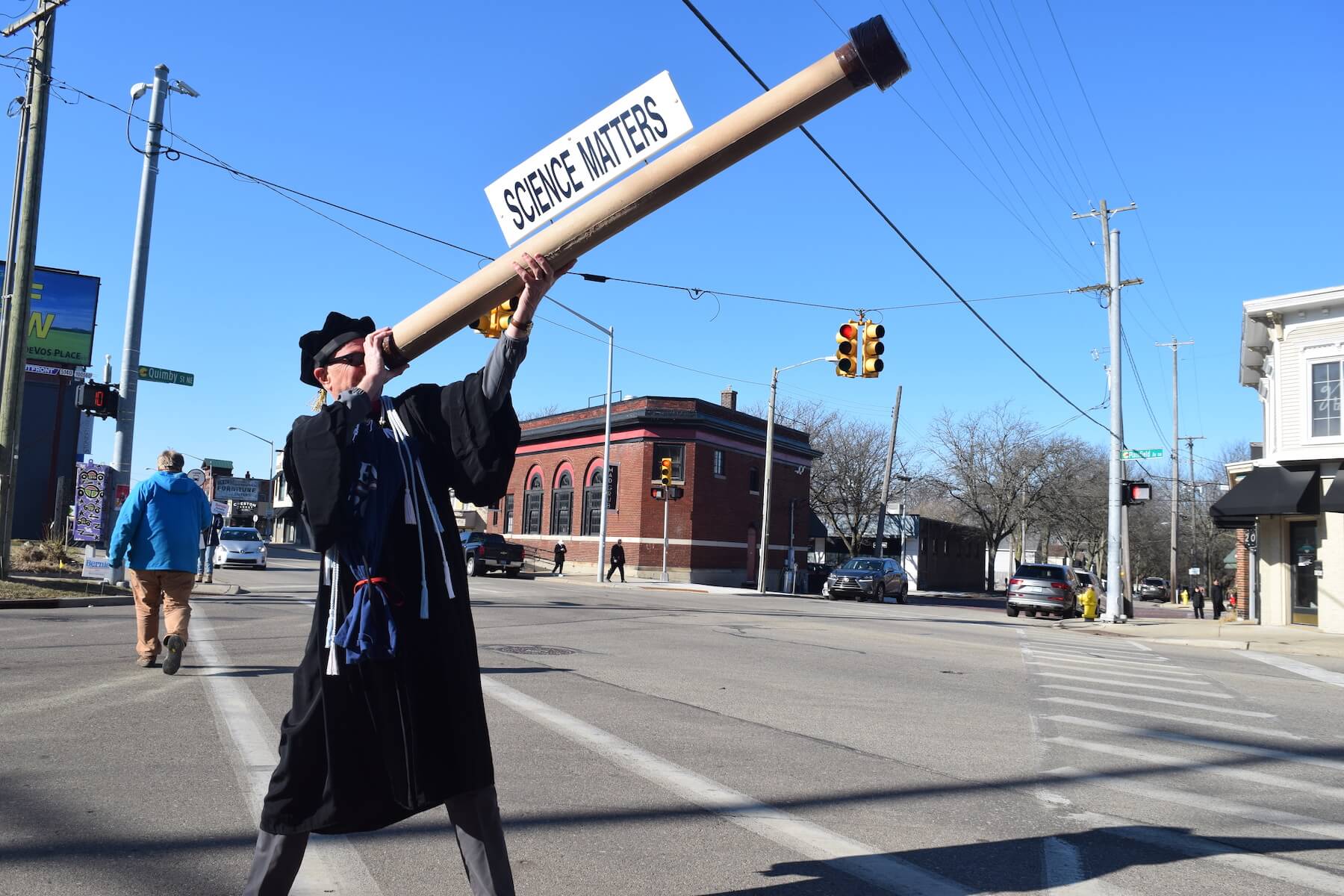 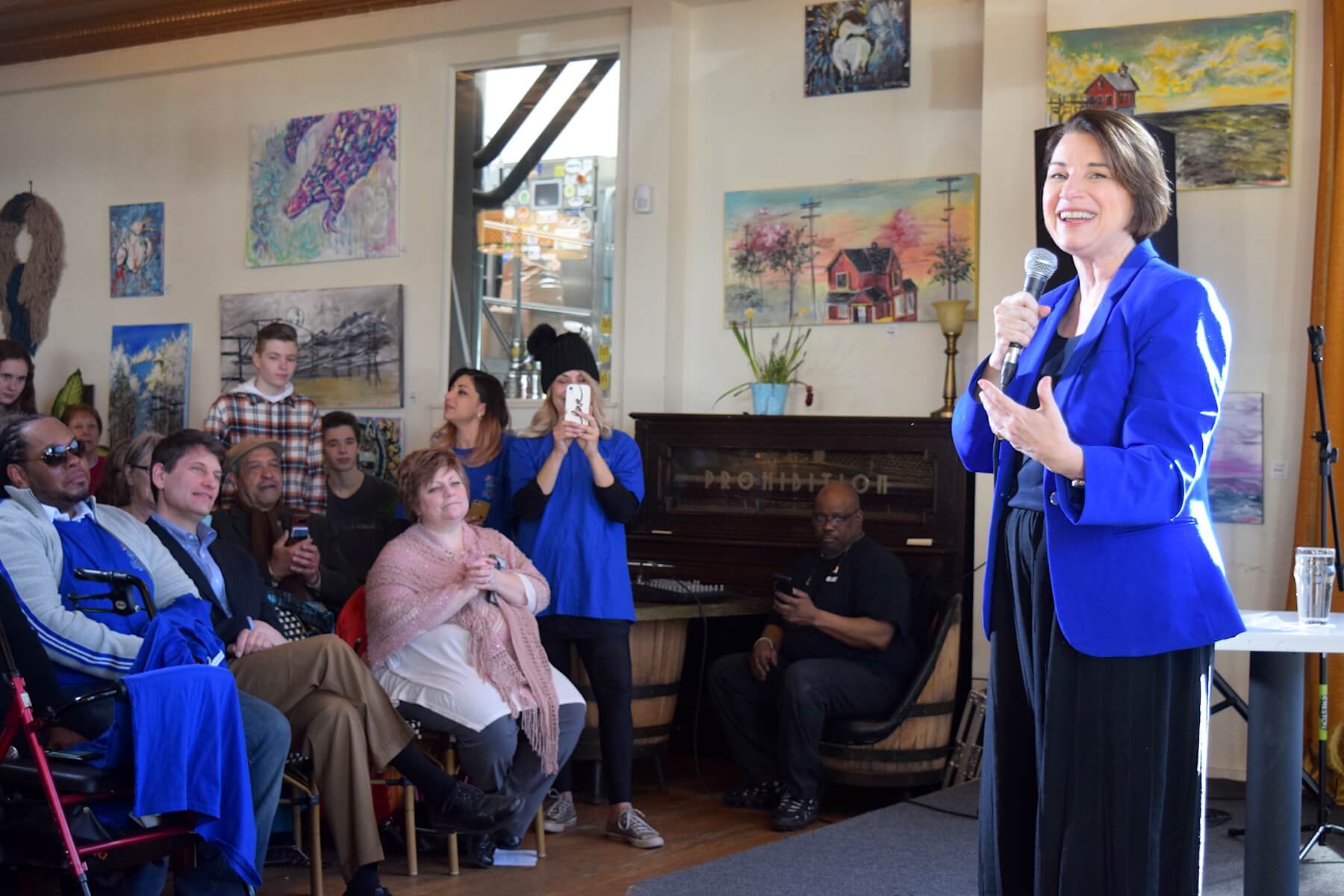 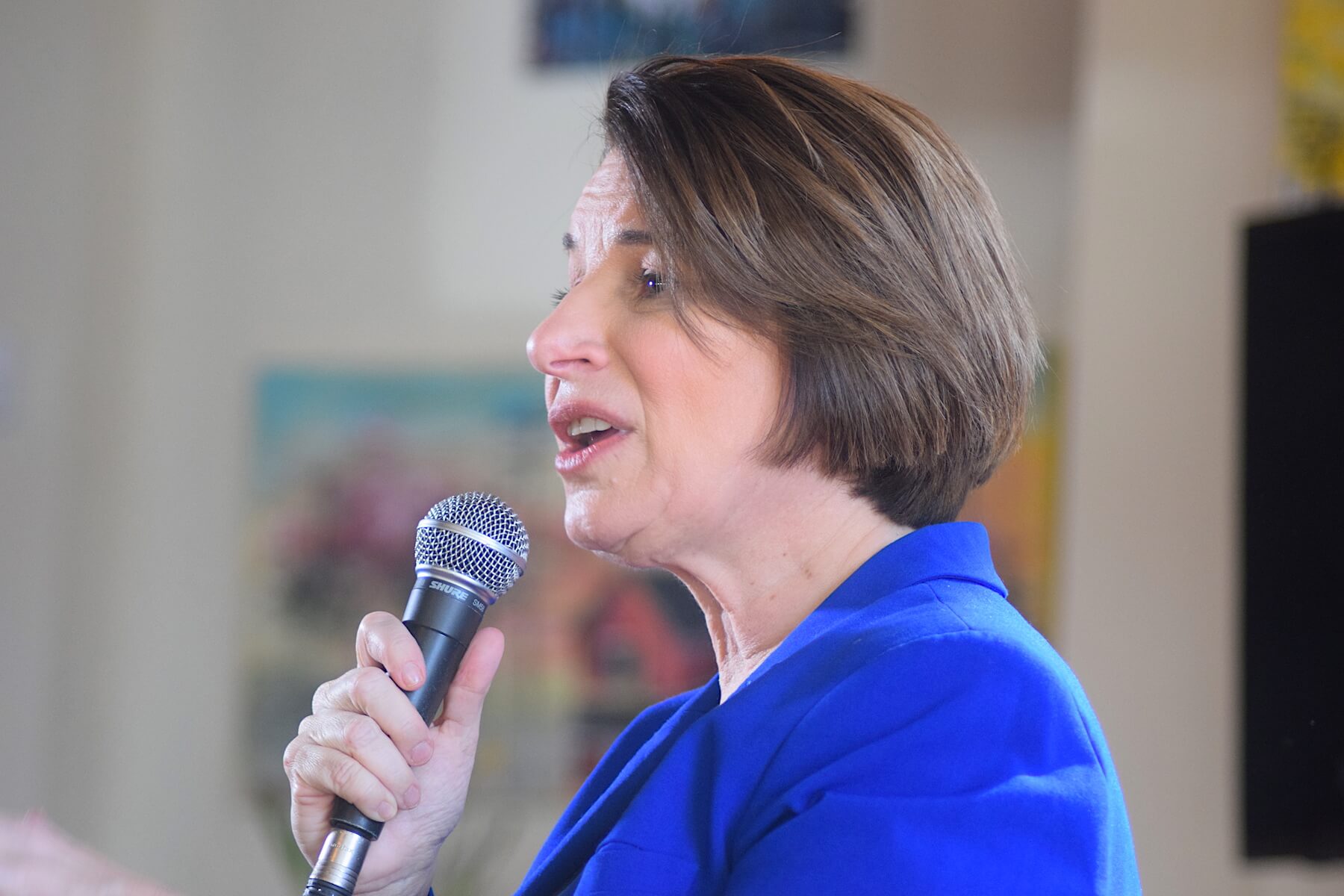 Kilgore, an African-American college student at Western Michigan University who also works as the advocacy director at OutFront Kalamazoo, a nonprofit serving the LGTBQ community in southwest Michigan, urged Biden to choose a woman as his running mate.

“It’s time to not have women only as first ladies, planning holiday parties and decorating the White House,” he said.

Kilgore said he would especially love to see Biden select Harris as his pick for vice president.

“I think Joe has no choice but to choose a woman as his vice president,” he said. “I say, ‘Blue no matter who and add some brown and I’m down.’”

The standing-room-only crowd that packed the Creston Brewery in Grand Rapids for Klobuchar’s event Saturday — which came just before Sanders and Biden will head to Michigan for a frenzy of campaigning—drew an audience fairly representative of the former vice president’s strongest supporters: Black voters, suburban women and moderate white voters. Almost everyone interviewed by the Michigan Advance cited Biden’s moderate politics as a draw, with attendees time and again saying they want a candidate who will “unite the country.”

“Biden can get moderates and conservatives to relate to him,” said Allison Klimek, 18, of Grand Rapids.

“I want someone who will act more moderately,” Clark said. “I come from Plainwell, which is more conservative, and I think it’s important to listen to those opinions.”

Penni Weninger, 66, of Cascade said she has been a strong Klobuchar supporter and plans to back Biden. As with other attendees on Saturday, she said she would reluctantly vote for Sanders should he win the Democratic nomination.

“Write this very carefully: I would have to,” Weninger said when asked if she would vote for Sanders should he land the nomination.

Similarly, Kilgore said he would “hold his breath” and vote for Sanders should the Vermont senator win the nomination.

A number of Saturday’s attendees emphasized they are supporting Biden specifically because Klobuchar, Buttigieg and Michigan Gov. Gretchen Whitmer endorsed him.

“I trust Amy and Gretchen and to see their support cements me voting for Joe,” said Austin Marsman, 20, of Allegan County.

Originally, Marsman supported Buttigieg and Warren for president before they dropped out.

Nick Klimek, 20, of Grand Rapids and Jason Van Oeveren, 24, of Grandville said Buttigieg’s endorsement of Biden will prompt them to cast their ballots for the former vice president on Tuesday.

“I was undecided until Monday night,” Klimek said, referring to the Biden endorsements from Klobuchar and Buttigieg. “It shows me they have the support of the party.”

As was echoed by her supporters, Klobuchar said she expects women voters to propel Biden to victory, both in the primary and the general election.

“At the first debate, we doubled the number of women who’d been on a Democratic primary stage in a presidential race,” Klobuchar said in an interview with Michigan Advance. “I think we’re going to bring people with us, even without being on the ticket; that’s very important.”

As with her supporters, Klobuchar routinely invoked words like “civility,” “decency” and “patriotism” during a wide-ranging speech that often attacked President Donald Trump.

“After meeting with carpenters in Pennsylvania and dock workers here in Michigan and dairy farmers in Wisconsin, I came up with a plan,” she said. “We are going to build a beautiful blue wall of Democratic votes around the Midwest, and we are going to make Donald Trump pay for it.”

As for whether or not she’ll be saying “ticket” when it comes to Biden’s running mate for vice president, Klobuchar said in an interview with the Advance that she has not addressed it with the former vice president.

“We didn’t discuss one thing like that,” she said. “I think he’ll choose whoever he thinks is best. There are so many qualified people around this country.”