Gov. Gretchen Whitmer in a Monday news conference gave an update on her plans to reopen Michigan’s economy, noting the process will be a heavily “incremental” one.

Whitmer introduced the “MI Safe Start Plan,” the state’s step-by-step process for allowing industries to reopen as it continues to monitor fluctuations in COVID-19 case rates. The number of new Michigan COVID-19 cases has slowly declined, Whitmer noted, and thanks to social distancing, the state has not reached the number of total hospitalizations it was projecting before those measures were put in place.

She said she’s cautiously optimistic about that, but Michigan is “not out of the woods yet.”

“I’m going to sound like a broken record, but we have to be really smart. We have to get this right,” Whitmer said. “None of us wants to see a second wave, and we can’t risk that happening.”

Whitmer extends stay-home order, but allows some businesses to open

The state has a total of 38,210 positive COVID-19 cases, according to data updated Monday. Michigan also reports that 3,407 people have died from the disease.

On Friday, Whitmer reupped her stay-home order, which is in place until May 15. However, she relaxed some elements, like allowing for golf courses and garden centers to open, which Republicans have pushed for.

Under the MI Safe Start Plan, only businesses who pose the lowest risk will reopen at first. Whitmer said she asked several business leaders, healthcare officials, labor leaders and industrial hygiene experts to make recommendations on which work environments have the lowest risk for COVID-19 to spread.

“[It will] take into account various sectors of our economy … as well as our public health abilities and workplace protocols so we can mitigate that risk,” Whitmer said.

The process will start with industries like residential and commercial construction, plus additional outdoor enterprises. Whitmer said she is also in the process of deciding which industrial sectors can restart.

State officials will closely assess re-engagement steps and “pull back” if there’s a spike in COVID-19 cases or if they become concerned about hospitals’ ability to meet patients’ needs, Whitmer said. Businesses will also be directed to adopt recommended workplace safety practices to ensure workers’ health, like providing masks and personal protective equipment (PPE), she added.

“If we see a second wave coming, we’re going to step back when it’s necessary,” Whitmer added.

Dr. Joneigh Khaldun, Michigan’s chief medical executive, joined Whitmer at the news conference. Khaldun said she is also optimistic, given that the state is seeing an overall plateau in the number of COVID-19 cases.

Khaldun noted that 8,342 people have recovered from COVID-19 since Friday.

“These are really positive signs,” Khaldun said. “However, it’s important to note we are still seeing many cases a day and many deaths.”

The rate of increase fluctuates by what part of the state you’re looking at, Khaldun pointed out.

“Like the governor, while I am cautiously optimistic that we are heading in the right direction, we will need to continually monitor and track the data and incrementally look at reopening the economy, keeping the health of our workers and our community top priority,” she said.

Khaldun and the Michigan Department of Health and Human Services (DHHS) are looking at several factors: trajectory of cases, trends in hospitalizations and deaths, decreases in positive testing, hospital capacities and available PPE.

Michigan unemployment could hit 23% and other alarming economic forecasts

“Currently, it appears that our hospitals are in a much better place with the amount of PPE that they have on hand,” Khaldun said.

If health officials begin to see problems with these metrics, DHHS may need to look at strengthening public health recommendations and social distancing requirements to stave off a second surge.

About a month ago, Whitmer created an advisory council to head off an impending economic crisis caused by the COVID-19 pandemic. That council and its members received some of the spotlight at the Monday news conference.

DTE Energy Executive Chair Gerry Anderson is one of the council’s co-chairs along with Nancy Schlichting, the former CEO of the Henry Ford Health System who stepped down last year from the Michigan State University Board of Trustees. Schlichting was unable to attend the news conference.

Anderson said the first goal of the council is to get Michigan on track to economically recover from the pandemic, he said. The second goal is to stage that recovery carefully, taking into account the health of Michigan workers. 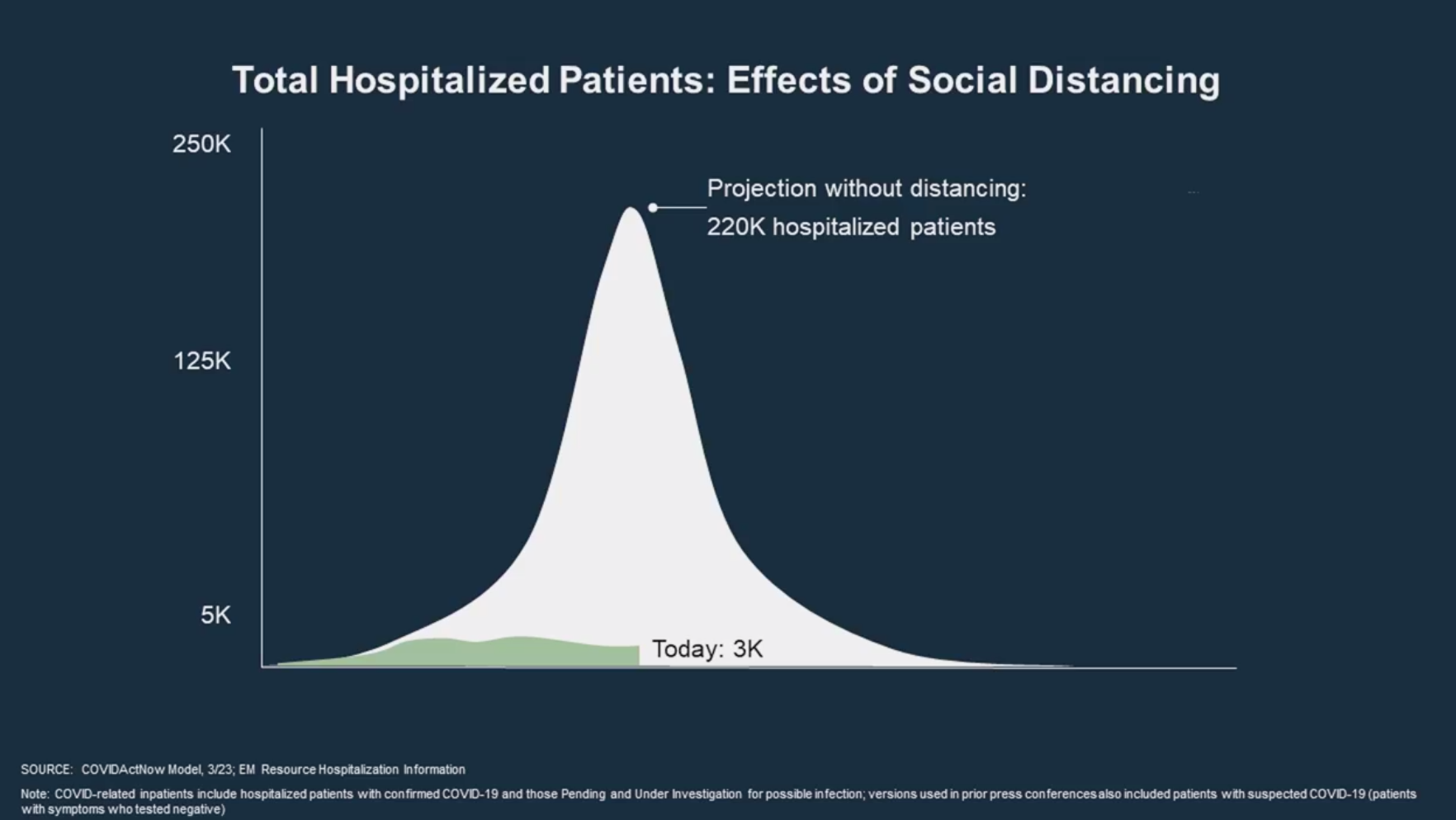 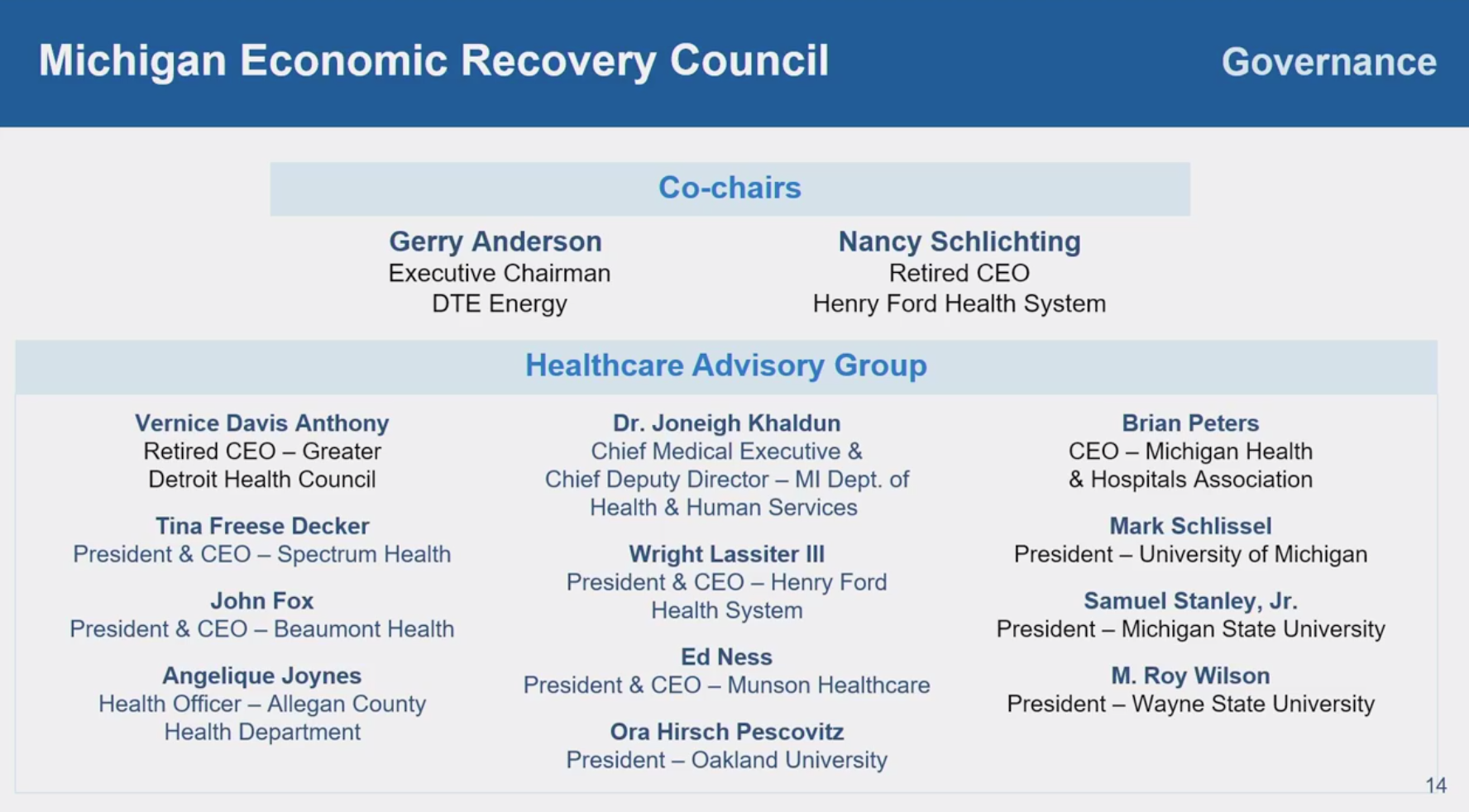 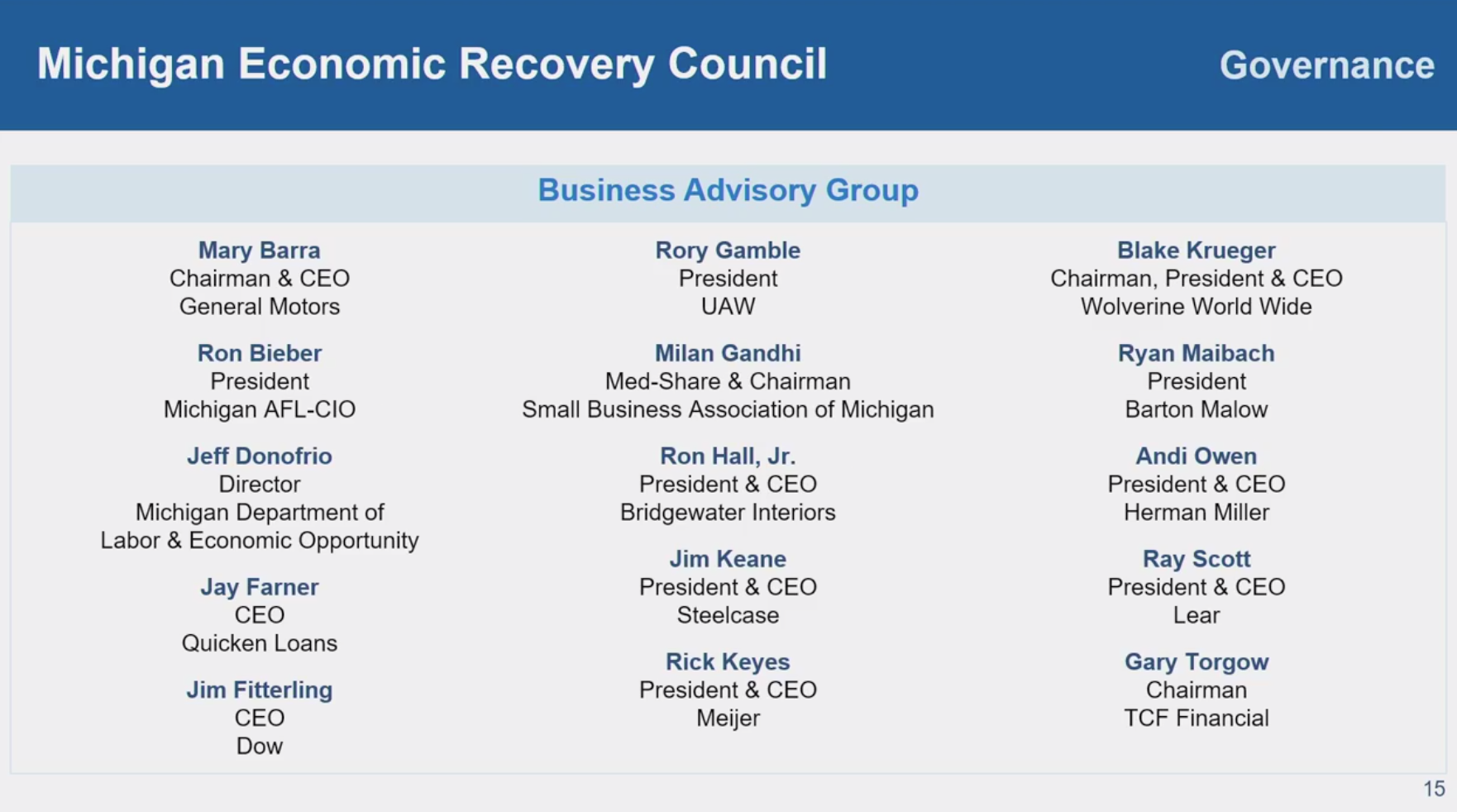 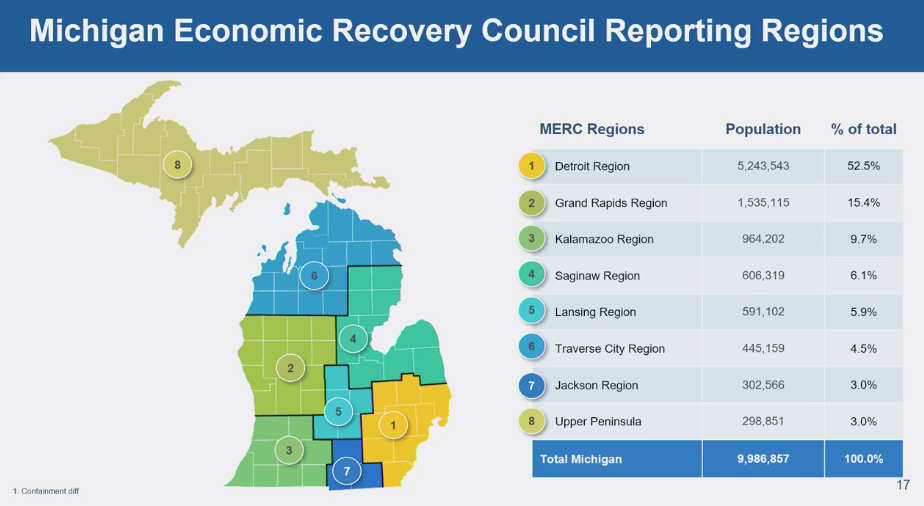 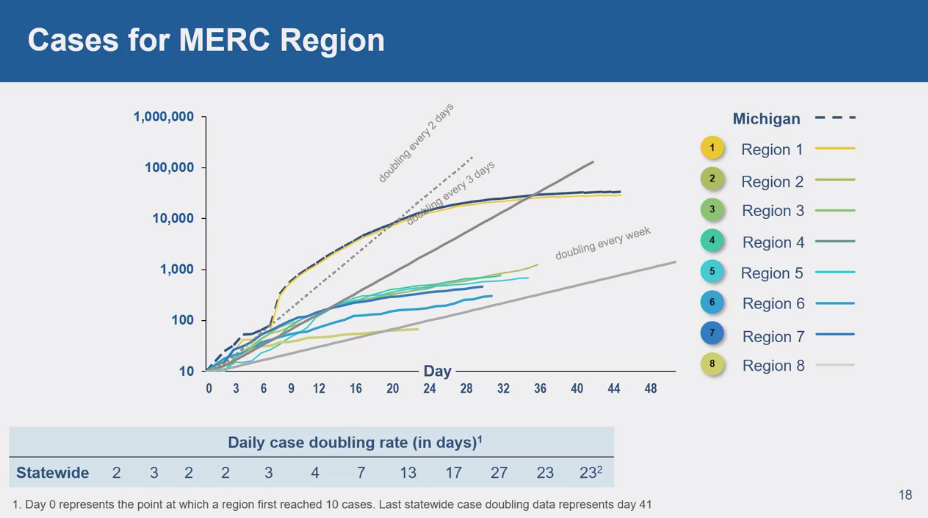 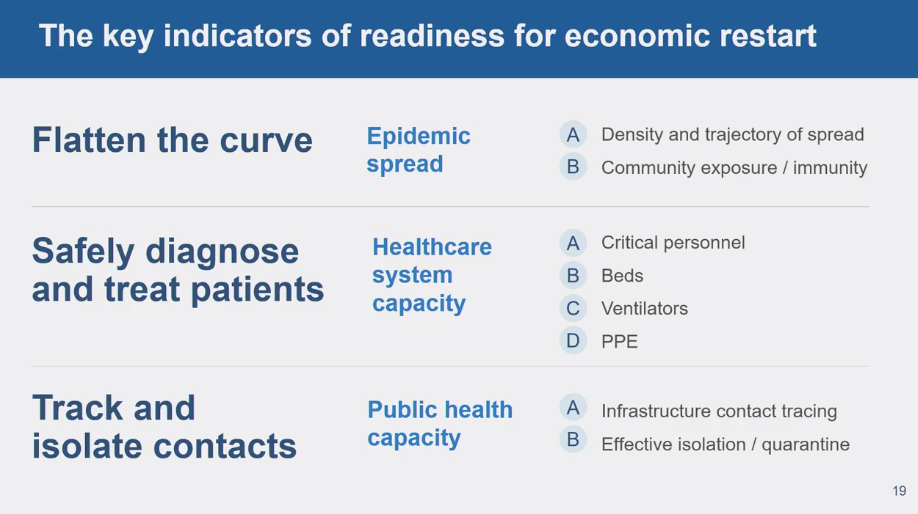 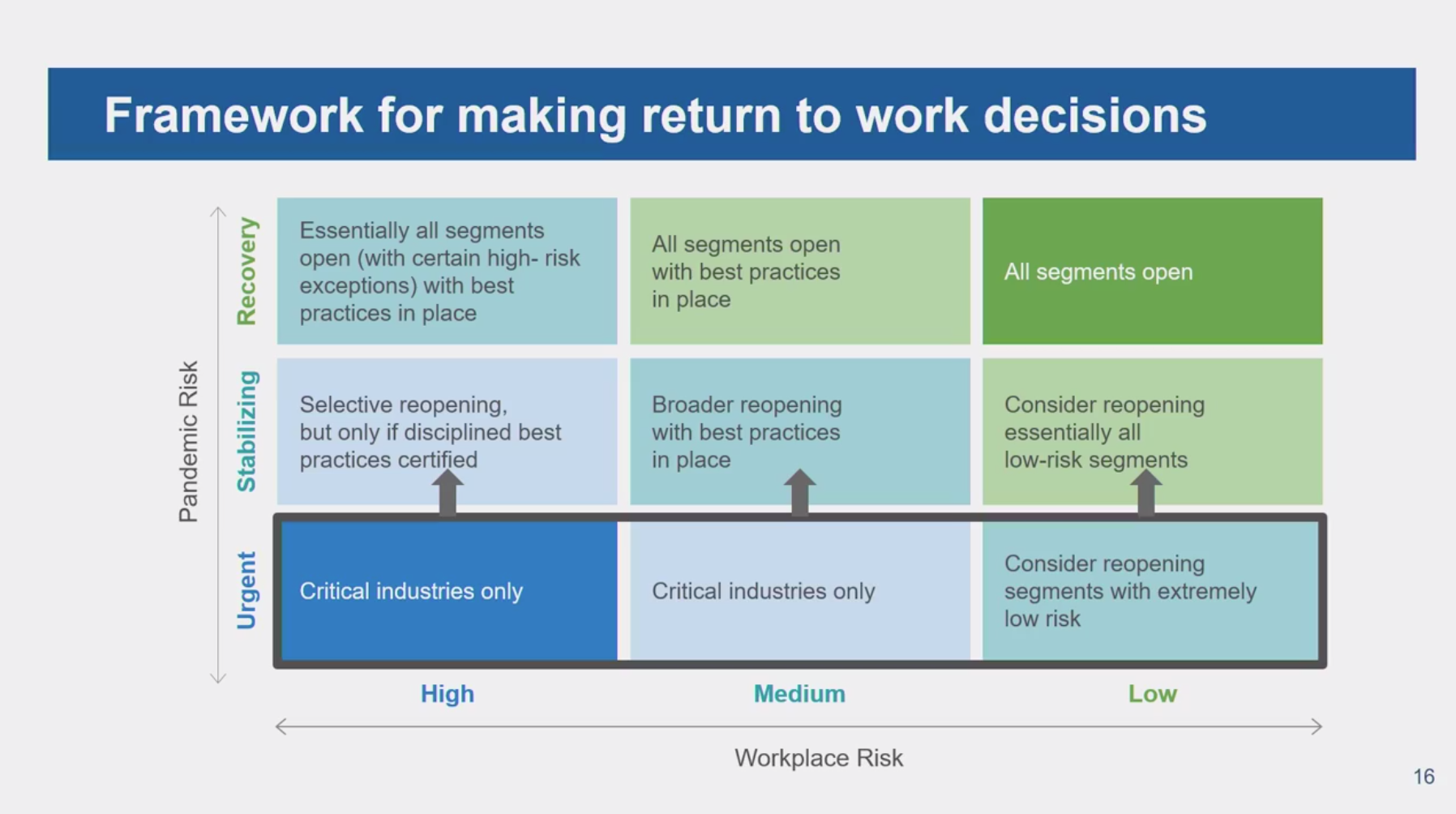 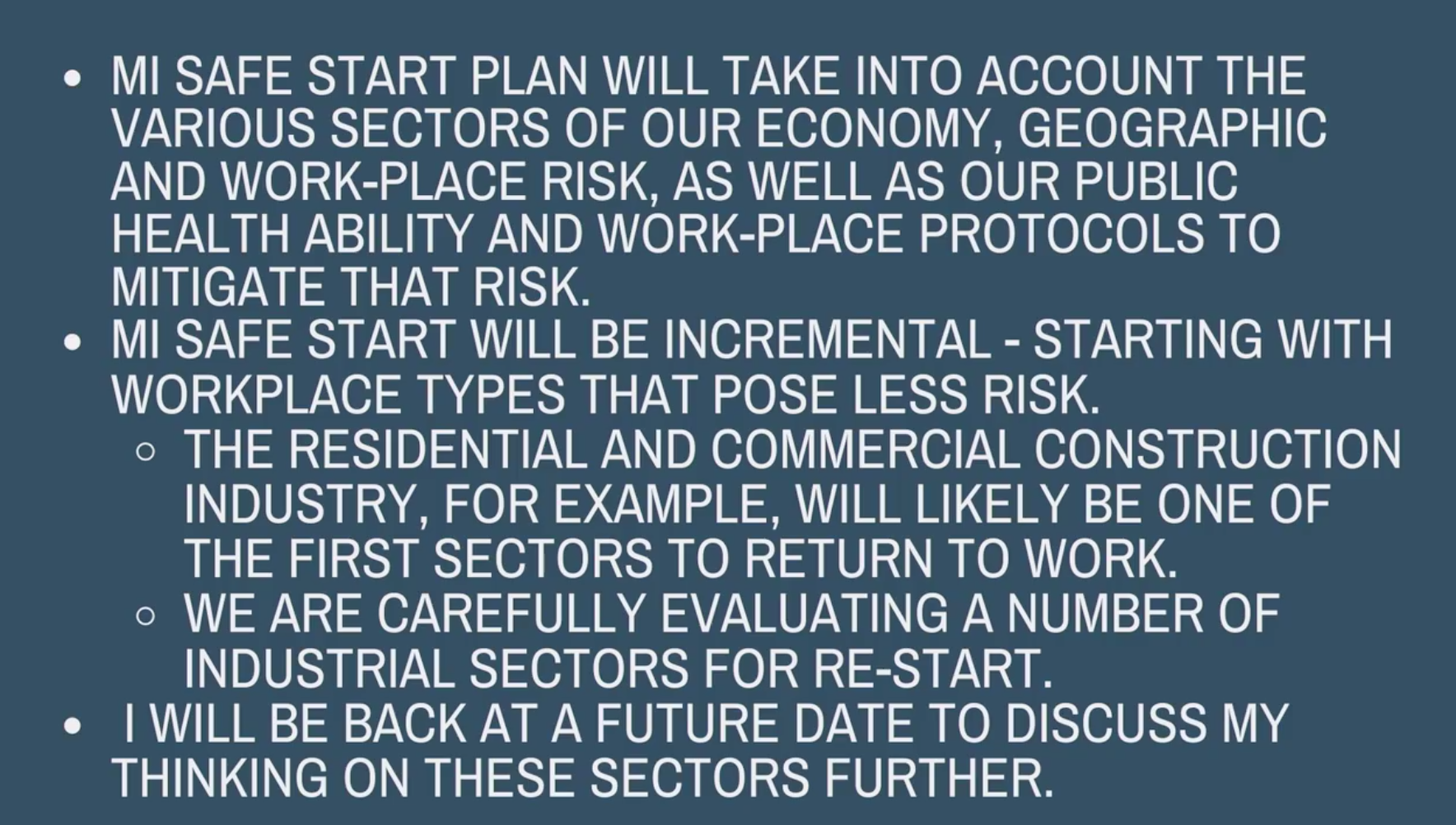 The council will provide Whitmer with advice to make decisions on returning to broader economic activity, Anderson said. It contains two advisory groups: one made up of experts from medical and academic fields, while the other is made up of business officials.

The council split Michigan into regions and evaluated each on different factors to track the disease. The two factors — labor concentrations and available health care capacity in areas — were merged to define the eight regions.

“We’ll use these eight regions then to track the intensity and the evolution of the disease over time across our state, as well as the capacity of our hospital systems and our public health infrastructure to deal with it in each region,” Lassiter said.

This approach will be used to judge the readiness of economic activity in each region, Lassiter said. Readiness is defined by three things: a region’s success in flattening the curve, ability to safely diagnose and treat patients and ability to track and isolate points of confirmed disease contact.

The Legislature is planning to meet Tuesday, Wednesday and possibly Thursday this week.

Both chambers met for rare Friday sessions last week. They formed a bicameral oversight committee to investigate the state government’s response to the COVID-19 crisis. The Senate passed legislation capping the governor’s emergency powers, which the House is expected to pass this week. Whitmer has said she’ll veto the bills and the chambers lack two-thirds majorities to override.

Both state House Speaker Lee Chatfield (R-Levering) and Senate Majority Leader Mike Shirkey (R-Clarklake) have pushed to reopen businesses on a more aggressive timeline, along with business groups like the Michigan Chamber of Commerce.

“This virus isn’t going anywhere soon,” Chatfield wrote on Twitter Sunday. “It’s here to stay for the foreseeable future. That’s why we need to start thinking of new ways we can continue life and jobs safely. Government deciding who’s essential is the wrong strategy. Every job that puts food on a table is essential.”

“I understand the eagerness to re-engage,” Whitmer said, when asked if she believes the Legislature will cooperate with further extensions. “But we’re vested with a lot more information, and as we’re making decisions, it has to be data-driven.

“I’ll be sending a letter to the Legislature asking them to extend this emergency by 28 days,” Whitmer added. “It really should be longer than that, but 28 days is another important step.”

C.J. Moore covers the environment and the Capitol. She previously worked at NASA’s Glenn Research Center in Cleveland as a public affairs staff science writer. She also previously covered crop sustainability and coal pollution issues for Great Lakes Echo. In addition, she served as editor in chief at The State News and covered its academics and research beat. She is a journalism graduate student at Michigan State University.