Militia-organized protest of 200 melts away at Capitol Thursday

A rainstorm helped dissolve an armed right-wing protest Thursday that peaked at 200 people outside the Capitol, which featured police confiscating an axe from one demonstrator.

The protest dubbed “Judgment Day” by the militia group Michigan United for Liberty was supposed to be against Gov. Gretchen Whitmer’s emergency measures to stop the spread of COVID-19, which has killed more than 4,700 in Michigan and sickened more than 48,000. Most attendees eschewed masks and didn’t observe social distancing guidelines.

One speaker under the “Freedom” banner declared Whitmer “should be under arrest — period — for criminal negligence of the state of Michigan,” but didn’t clarify what the alleged crime was. 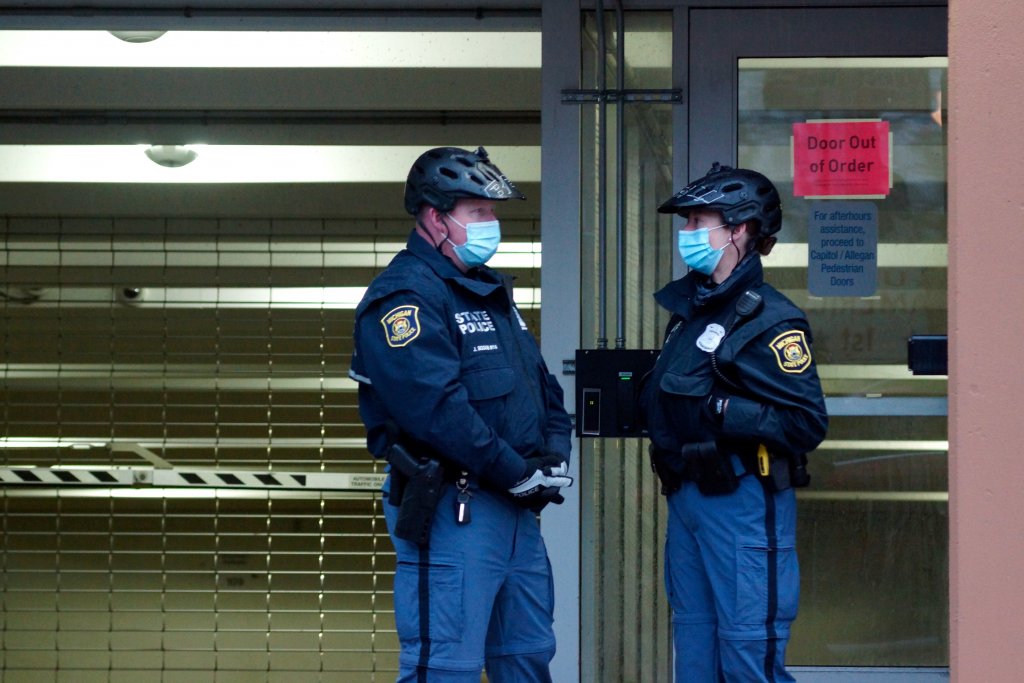 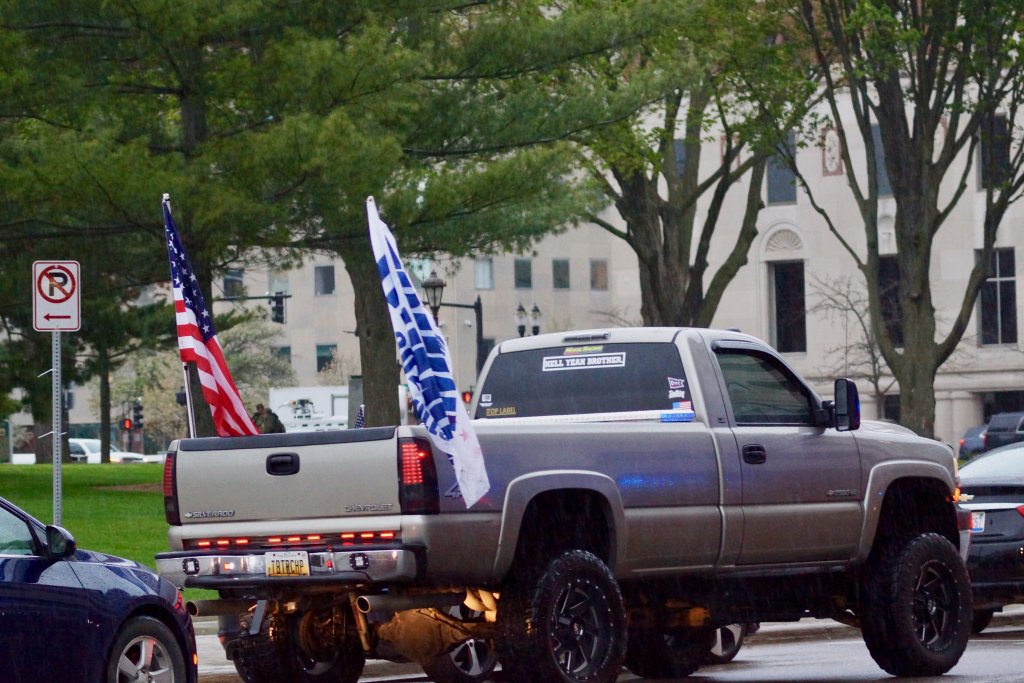 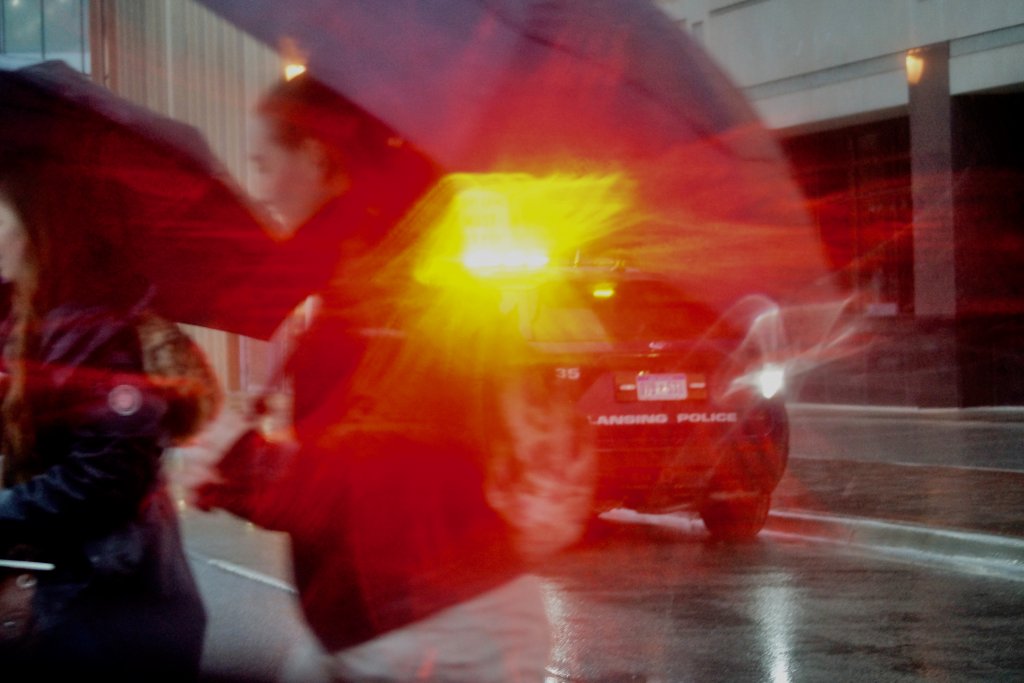 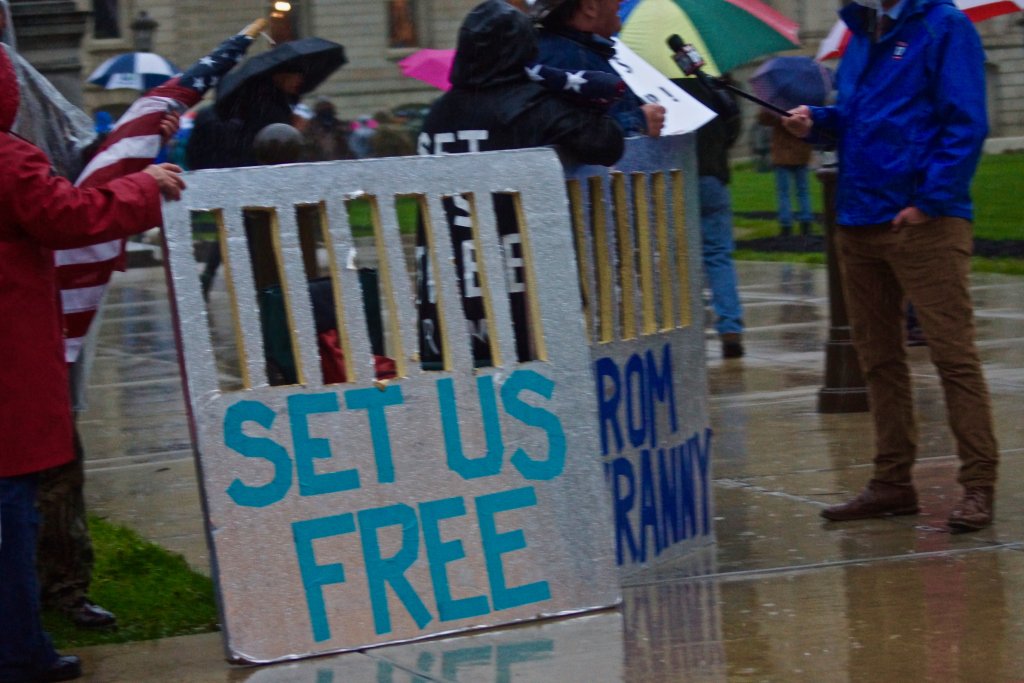 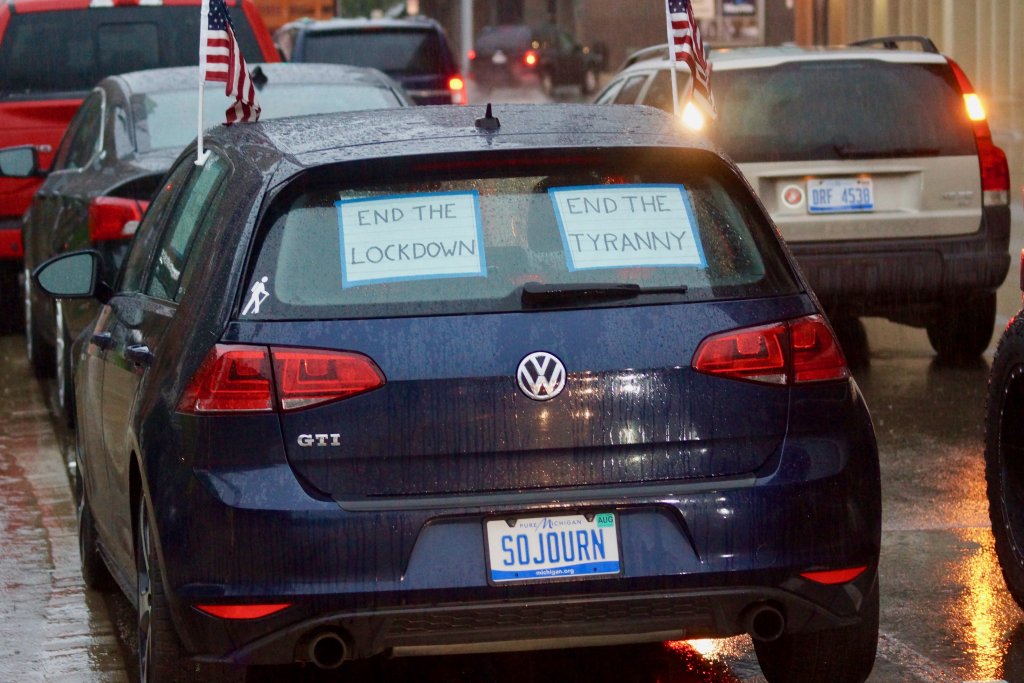 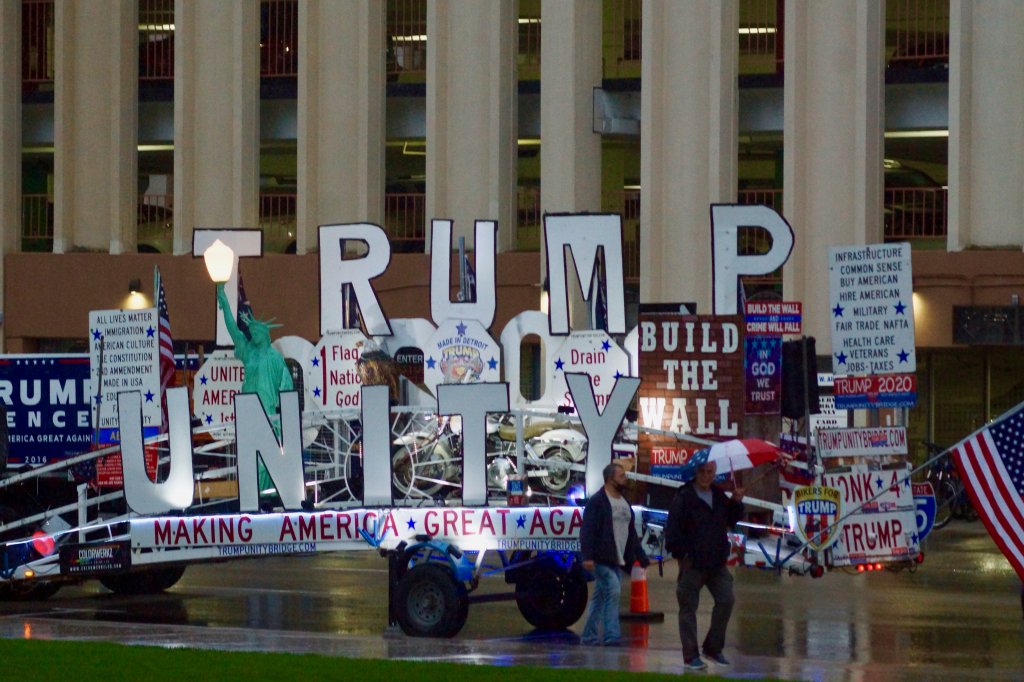 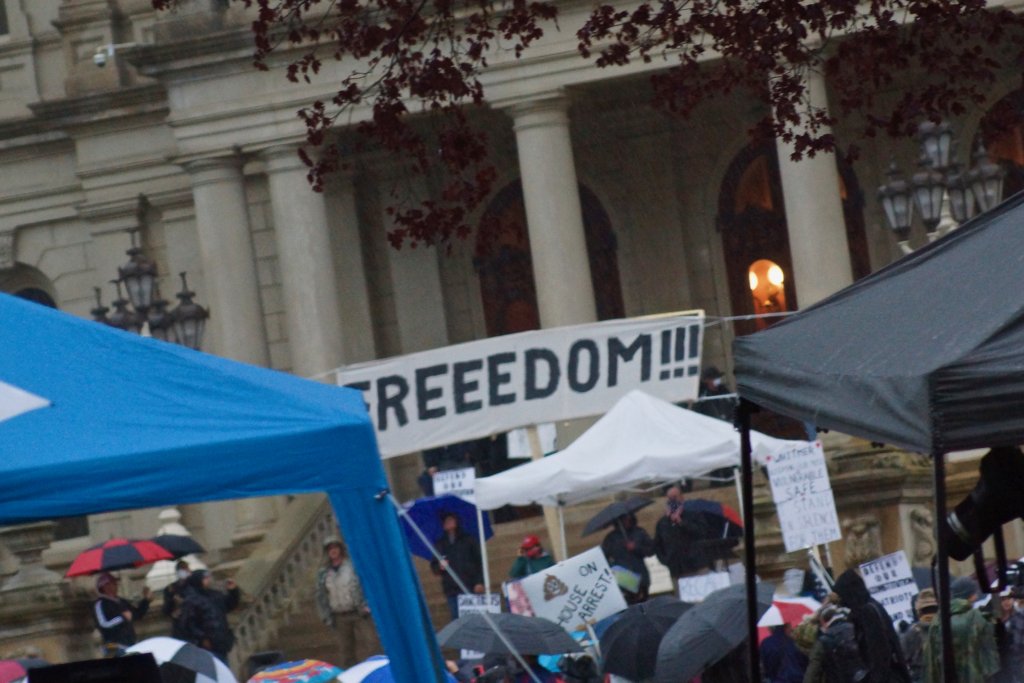 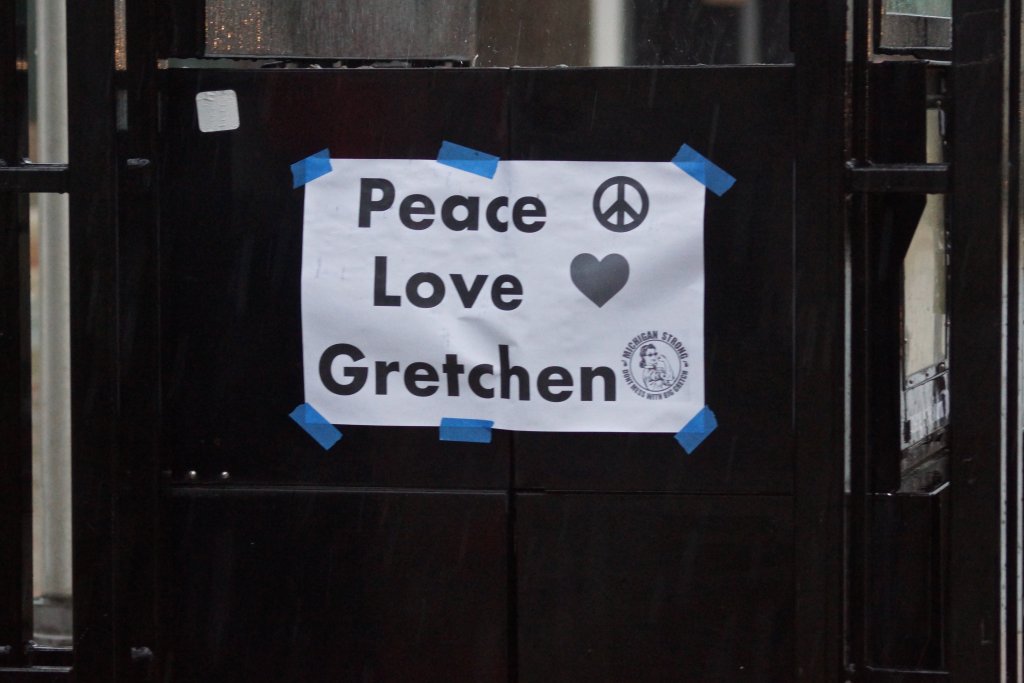 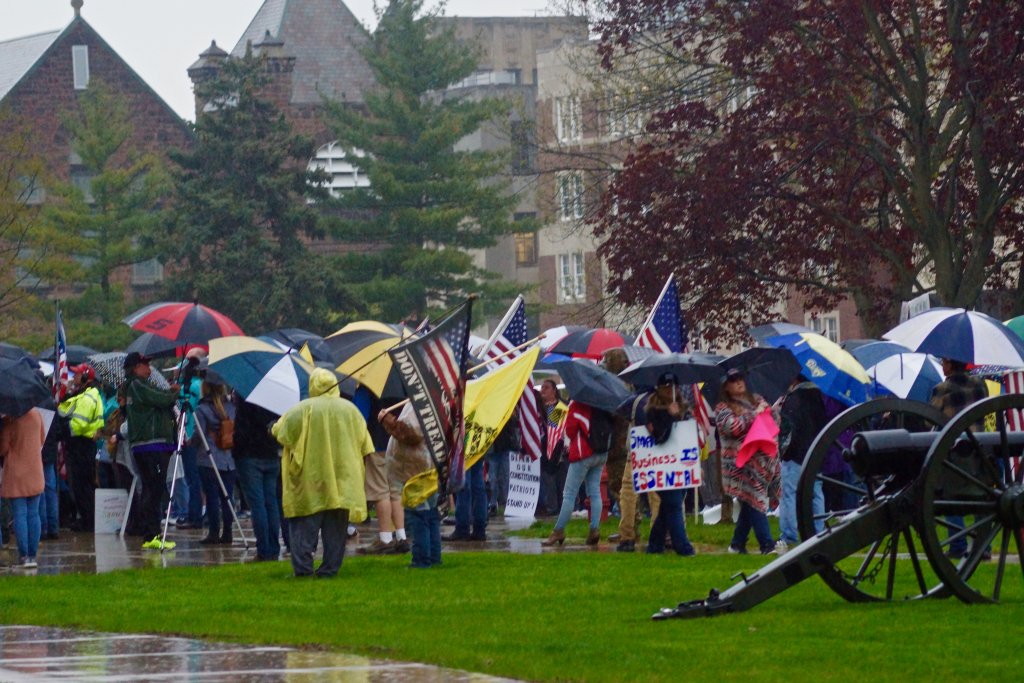 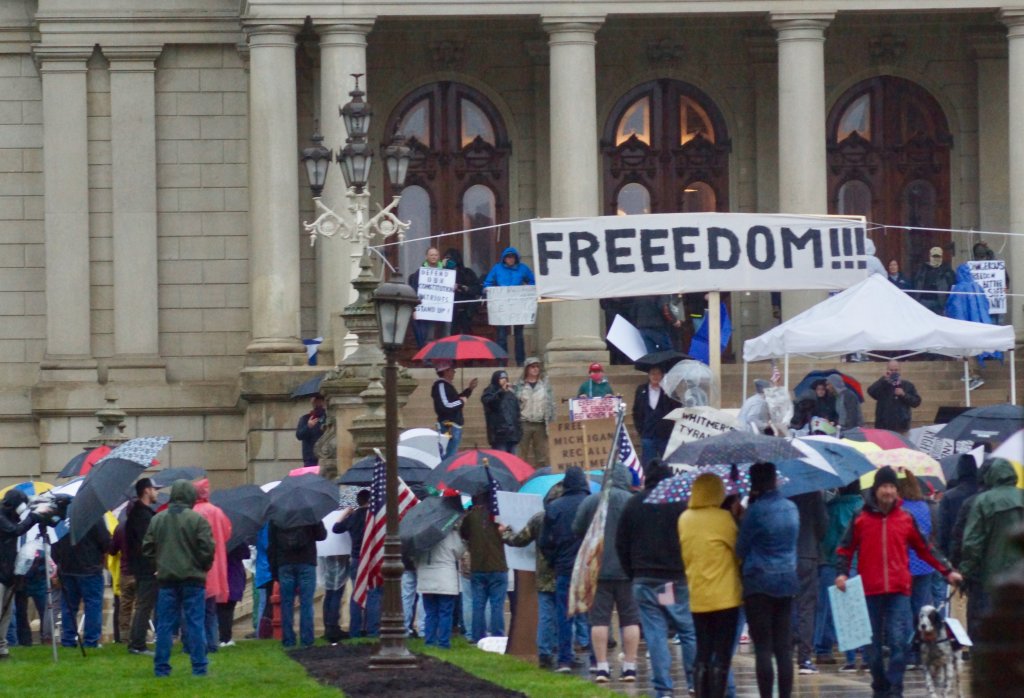 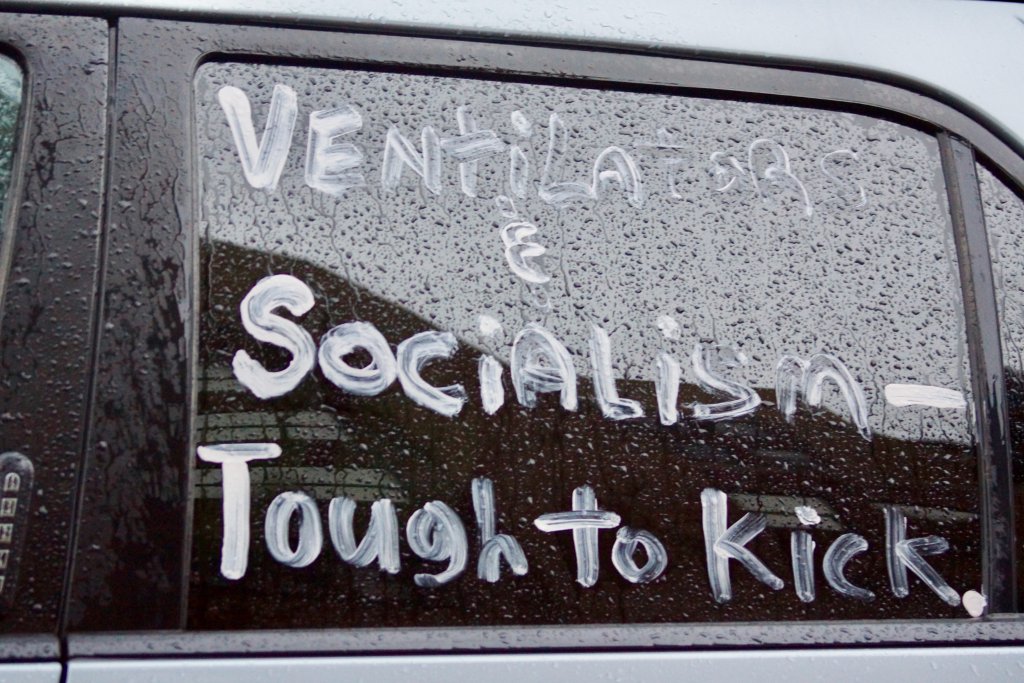 Although this is the third protest in a month, public opinion hasn’t moved against the Democratic governor. A new Washington Post-Ipsos poll shows 72% of Michigan adults approve of Whitmer’s COVID-19 actions and 25% disapprove. Several signs with the message of “Peace, Love, Gretchen” were pasted around downtown Lansing.

Protesters held umbrellas and several pop tents were pitched, but several attendees already started to leave before 10 a.m. due to the weather.

There was nothing to protest inside, as state House Speaker Lee Chatfield (R-Levering) and Senate Majority Leader Mike Shirkey (R-Clarklake) canceled House and Senate sessions Thursday.

At least some demonstrators weren’t pleased about the decision, unfurling a banner that read, “Open Now. Chatfield, Shirkey Where R U??? We Need Leaders.”

The Michigan State Capitol Commission declined this week to ban guns from the building and formed a panel to further study the issue. Democratic lawmakers have expressed their fears about armed protesters being allowed to swarm the Capitol.

“This is a terribly concerning development in that we have legislators who are showing up to work wearing bulletproof vests,” Whitmer said this week on ABC’s “The View.” “That is disenfranchising thousands of people in our state if their legislator doesn’t feel safe enough to go to work and to do what their job is.”

The Committee to Protect Medicare, a Chicago-based doctors’ group, praised Whitmer’s COVID-19 response in the face of pressure from “extremist groups and corporate interests.”

“Every public health expert, using science, data and best practices, has warned that if we reopen our economy prematurely without a plan to test, trace and isolate COVID-19 infections, then we risk more outbreaks and more suffering,” said Dr. Farhan Bhatti, MD, CEO of Care Free Medical in Lansing and Michigan lead for the Committee to Protect Medicare.

“All of us empathize with families who have lost jobs and face economic suffering from COVID-19 related closures. What we must not do is allow fringe, extremist groups and corporate interests to rush Michigan to reopen or misuse junk science to fool people into a false sense of security. Gov. Gretchen Whitmer has withstood tremendous pressure from these special interests, and she deserves recognition for using science to determine Michigan’s public health response to a pandemic that has taken the lives of thousands of our fellow Michiganders.”

The rally was hyped in several Facebook groups featuring violent comments about Whitmer and other Democrats. Previous demonstrations featured signs calling for Whitmer’s murder, including “Tyrants Get the Rope.”

The protest was smaller than the previous rallies on April 15 and April 30, but had many of the same elements, including militia members in camouflage with automatic rifles. A float supporting President Donald Trump was there, along with several people and cars decked out with Trump flags. A few protesters wore Trump shirts and hats and there were signs comparing Whitmer to Adolf Hitler.

One new addition was someone dressed in a bright yellow costume of the anime character Pikachu gripping a gun.

A protester brought back the dark-haired Barbie doll in a noose, which was supposed to symbolize Whitmer. The owner, who also had an axe, got into a fight with another protester.

Sinclair Broadcasting reporter Mikenzie Frost tweeted that the owner “showed me the axe and told me if I misquoted him, I ‘would be done.’”

Michigan State Police (MSP) noted the axe incident on Twitter and said the weapon “was safely turned into law enforcement. There were no injuries.” MSP also noted another altercation over a sign and said the victim was a 60-year-old male.

The Advance reached out to MSP for updated information on altercations at the protest and if any arrests were made. Lt. Brian Oleksyk referred the Advance to MSP’s Twitter updates and did not comment further.

One car’s roof featured what looked to be a Donald Trump doll holding an automatic weapon with blood at the tip. Messages were painted on the car’s windows, including, “Ventilators and Socialism — Hard to Kick.”

Militia-organized protest of 200 melts away at Capitol Thursday