Small Michigan cities and towns have held peaceful anti-police brutality protests, joining a growing Black Lives Matter movement that has swept across the nation — and even the world — in the wake of George Floyd’s death.

Since late May, demonstrations have taken place in more than two dozen municipalities in Michigan on both sides of the Mackinac Bridge. At least 700 cities and towns in all 50 states have seen protests, according to USA Today.

Close to 200 protesters on Saturday gathered in Owosso, a city 40 minutes northeast of Lansing, to demand justice for Floyd, Breonna Taylor and numerous other African Americans who have died as a result of police brutality and racist violence. Several protesters, many of them young, carried placards calling for reform.

Organizers led the crowd in chants of, “I can’t breathe,” echoing a portion of Floyd’s last words. Floyd, a 46-year-old Black man, died May 25 in Minneapolis police custody after an officer pinned him down for nearly nine minutes by pressing his knee onto his neck. Floyd can be seen on video telling the officer he cannot breathe.

Protestors laid down on the lawn and steps of Owosso City Hall for almost nine minutes, the duration of time Floyd was held down in the video.

They also sang “Happy Birthday” to Taylor, who died in March. She would have turned 27 on Friday, the day before the protest. Louisville Metro Police Department officers executing a search warrant fatally shot Taylor after her boyfriend — believing the officers to be intruders — shot at them and they returned fire. They were executing a search warrant for drugs, but none were found in her apartment. Taylor’s family has since filed a wrongful death lawsuit against the LMPD.

“We’re all trying to find reform and unity,” said Ashley Foster, one of the Owosso residents who organized the protest.

Owosso has been in the news as the home of Karl Manke, a barber who refused to follow Gov. Gretchen Whitmer’s emergency orders during the COVID-19 pandemic and kept his shop open. As he’s battled state regulators and Attorney General Dana Nessel, he’s become a conservative hero. Militia members have come to support his business.

The Owosso Police Department on Saturday shut down sections of both M-21 and highway M-52, which intersect on the west side of the city. Protesters stopped for about 15 minutes in that intersection before returning to a plaza in the downtown area to hear from a number of speakers.

“The only reason why we got the movement and the advancements that we have right now is because all of you came together to make it happen,” Robinson said.

“We have to keep this energy on the ground,” he added, telling younger members of the crowd he was glad to see them advocating during the protest.

Racism is historically entrenched in Owosso. Minister and civil rights activist Malcolm X in his autobiography referred to Owosso as “White City,” describing it as a place where Black Americans and marginalized groups were threatened with racist violence if they were there after dark.

And in the 1920s, the Ku Klux Klan was heavily active there  — they rented office space in a building in Owosso’s downtown area, according to the city’s 2010 report on its historic district.

The protest stayed peaceful, despite the appearance of a handful of counter-protesters and numerous comments on a local community page alleging it would turn violent because of outside influence.

As the protest ended, Foster told the Advance she was proud of her fellow organizers, whom she said were crucial to pulling off the event.

“Everything ran smoothly and everyone stayed positive, so I can’t ask for anything more,” Foster said.

A number of smaller protests like the one in Owosso also have cropped up around the state. 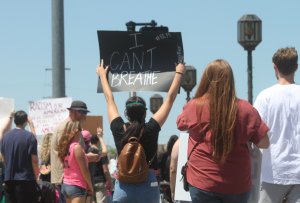 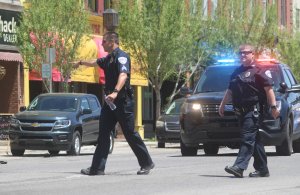 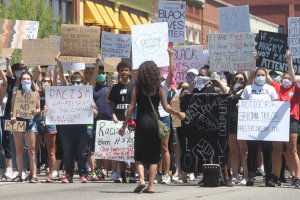 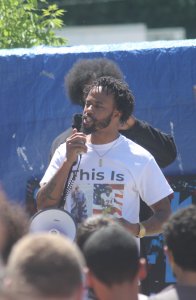 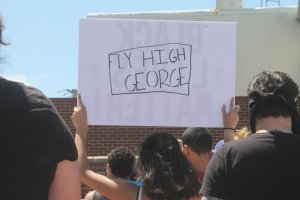 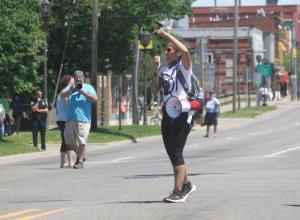 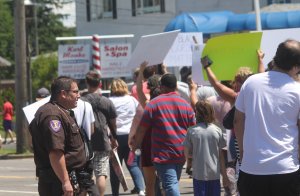 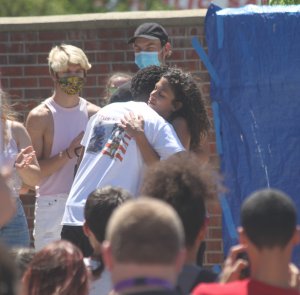 One such anti-police brutality protest attended by several hundred was held Thursday in Howell in Livingston County, an area that once had well-established ties to the KKK. The area was the one-time home of KKK Grand Dragon Robert Miles was the site of the world’s largest auction of Klan memorabilia in 2005.

Demonstrators gathered outside Livingston County Courthouse and denounced white supremacy. The protest remained peaceful, though Howell police are seeking an assault charge for a man who allegedly struck a counter-protester.

Other protests occurred in Chelsea, Dexter, East Lansing, Houghton, Manchester, Marquette, Royal Oak and Saline. Several of them, like Grosse Pointe’s “Kids March for Black Lives Matter,” were youth-organized. In Brighton, which also is located in Livingston County, several high school students led a march from their school to the downtown area.

C.J. Moore covers the environment and the Capitol. She previously worked at NASA’s Glenn Research Center in Cleveland as a public affairs staff science writer. She also previously covered crop sustainability and coal pollution issues for Great Lakes Echo. In addition, she served as editor in chief at The State News and covered its academics and research beat. She is a journalism graduate student at Michigan State University.

In wake of Lyoya’s death, a reckoning with Grand Rapids’… by Anna Gustafson May 7, 2022
Here's the full text of Biden’s State of the Union address by Michigan Advance March 2, 2022
Election roundup: History made in Dearborn, 2 Republicans to… by Anna Gustafson November 3, 2021