About five months ago, I became a mom. 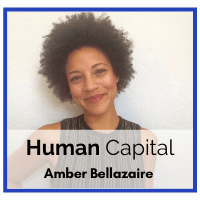 I met my daughter in the early hours of the morning, and the days since have been the best and hardest of my life. It has been a time of healing and rapid learning. A time when feelings of exhaustion, wonder and frustration mingle and fluctuate, sometimes by the hour. A time when support and encouragement have never felt more important or more appreciated.

Even as a policy analyst well versed in maternal and infant health, there have still been moments when I’ve found it difficult to discern between what is “normal” and what is more concerning, so it is clear to me that health education about the postpartum period is important.

This TED talk by Dr. Alexandra Sacks, for example, discusses the difficulty many postpartum women face when trying to determine whether what they are feeling are the very common effects of matrescence or the effects of postpartum depression.

But I think it’s also important to recognize that hospital pamphlets and information campaigns about postpartum warning signs will ultimately prove less effective if women become uninsured soon after giving birth. Countless studies show that, compared to those with health insurance, people without health insurance are less likely to receive medical care.

This suggests that broadening health care coverage during the postpartum period would be a meaningful step on the path toward improving maternity care and ensuring that women receive the health services they need in the months that follow childbirth.

In Michigan, 44% of births are covered by Medicaid. Yet a majority of women with that coverage will lose it in the months that follow the delivery of their baby.

More specifically, in Michigan, if you’re enrolled in Medicaid as a pregnant person, your coverage will end two months after the month in which you give birth. This is unfortunate, given that the need to manage health conditions, including potential complications from childbirth, can and certainly do extend beyond that 60-day cutoff.

Women are thus tasked with finding and enrolling in another form of coverage or risk becoming uninsured all while navigating the very tumultuous time that comes after welcoming a newborn into your home. A better alternative, however, would be to allow pregnant and birthing women to keep their Medicaid coverage for at least one year postpartum.

The postpartum time is one marked by monumental change — physical, hormonal and psychological. Women are learning how to feed and care for their baby, while simultaneously trying to physically recover from delivery, piece together moments of rest and maintain their mental health.

It’s no wonder then that supportive health care is critical during this time. This is especially true for women who had a preexisting health condition or a complication during pregnancy or childbirth. Extending Medicaid coverage from 60 days to one year would allow postpartum care to be truly ongoing and access to needed medications and health services to go without disruption.

Better, longer postpartum health coverage could save the lives of Michigan moms. Although a majority of maternal deaths occur during pregnancy or within the first six weeks after pregnancy ends, about 17% occur after that time. This suggests that efforts focused on the “late” postpartum period, defined as the time between 43 days and 365 days after giving birth, are an opportunity to reduce maternal mortality rates.

Findings from a study analyzing the relationship between Medicaid coverage and maternal mortality suggest that sustained insurance coverage after childbirth may contribute to reductions in deaths occurring in the late postpartum period.

As such evidence mounts, many states, including our own, are taking strides to extend Medicaid coverage past the statutorily mandated 60 days postpartum. And at the federal level, efforts to address the need for care continuity for postpartum women are evident in the Helping MOMS Act, MOMMA’s Act, and the “Momnibus.”

When my colleagues and I met with various legislators in February and early March there seemed to be genuine, bipartisan interest in this proposal. But then the enormity of COVID-19 set in and drastically changed the legislative and budget landscape and timeline.

The COVID-19 pandemic’s impact on state budgets could mean Medicaid cuts or that plans to improve or broaden the program are canceled or delayed. But attempts to scuttle the program contradict what this public health crisis has highlighted: health care and comprehensive coverage are imperative.

Moreover, meeting the health needs of women with lower incomes, particularly during pregnancy and postpartum, remains vital to the well-being of our communities. Enhancing postpartum care by providing a more flexible timeline for women to transition to other sources of coverage and, most importantly, ensuring that diagnosis, monitoring, and treatment are not missed or delayed could protect the health of thousands of Michigan moms.

We hope Michigan lawmakers will keep this in mind as 2021 budget negotiations continue and as Brinks’ bill awaits action.

Amber Bellazaire joined the Michigan League for Public Policy as a policy analyst in June of 2019. Her work primarily focuses on state policy and budgets affecting Michigan’s Medicaid programs. Previously, Amber worked at the National Conference of State Legislatures tracking legislation and research related to injury and violence prevention, adolescent health, and maternal and child health.