‘She was the entire right side of my body’: Detroit honors COVID-19 victims

”It allows people to see the faces instead of just hearing the numbers. It is a beautiful display of unity amongst people who are now ancestors,” Barksdale said about Detroit Memorial to Honor Victims of COVID-19 in an interview with the Advance on Sunday.

He lost his “big sister” and “protector” Laneeka Barksdale, a 47-year-old mother of four, to coronavirus earlier this year. They attended several Detroit schools together, including Courtis J.R. King, Longfellow, Beaubien and Cody High School.

“She was the entire right side of my body,” Barksdale said.

The celebration of life featured 15 funeral processions traveling on a dedicated route on Belle Isle, the city-owned 982-acre island park. The effort, according to city officials, is the nation’s first citywide memorial to honor coronavirus pandemic victims.

“Members of this community are grieving, it is important and necessary to provide an opportunity for families to celebrate those lost to this terrible disease and begin to heal,” said Detroit Mayor Mike Duggan. “We are taking this time to reflect on what has been a very hard time for so many Detroiters and commemorate the lives of our neighbors who are no longer with us.”

COVID-19 has claimed 6,473 Michigan lives to date. Detroit, the state’s largest city, has been rocked by the pandemic. Blacks compose 14% of the state’s population; yet they account for about 33% of COVID-19 total cases and 40% of COVID-19 related deaths. Detroit is 80% African American.

Nearly six months after the first case was reported in Michigan on March 10, Gov. Gretchen Whitmer pointed out that COVID-19 remains a significant public health concern. During her formal remarks, she called on state residents to take the virus seriously. She lifted up in memory 5-year-old Skylar Herbert, the state’s youngest coronavirus victim, as well as former lawmakers Robinson and Hood III. 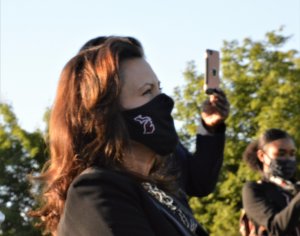 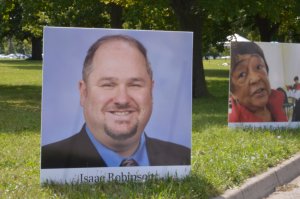 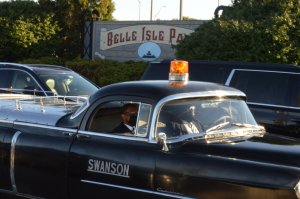 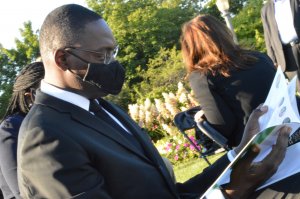 “We owe it to all of them to build a safer and stronger and smarter Michigan,” Whitmer said.

Detroit native Lt. Gov. Garlin Gilchrist noted he has lost 23 people, including 20 Detroit residents, in his life to COVID-19.

“We are here to honor the memory, mourn the loss, and grieve in the name of the 6,000 lives who have passed in our state due to COVID-19,” Gilchrist said.

Over several decades, the island park has been the site of family reunions, picnics, fireworks watches and sporting events. Barksdale believes that Belle Isle is a fitting site for the tribute.

Laneeka’s parents, Stephanie Barksdale and Dale Frederick, would be proud of her, Barksdale said. He and members of his family viewed a portion of the visual tribute on Belle Isle on Saturday, Sunday and Monday.

Tiona Barksdale-Matthews, Omari’s and Laneeka’s younger sister, visited Belle Isle on Sunday and Monday. She described Laneeka as her “first friend” and someone who she also looked up to. Laneeka taught Tiona how to ballroom dance and they never missed a concert for New Edition, the 1980s and ‘90s popular R&B vocal act.

“It’s a beautiful gesture that Detroit took a moment to honor those and show appreciation,” said Barksdale-Matthews. “I’m glad that they were able to do something like this.”

‘She was the entire right side of my body’: Detroit honors COVID-19 victims