Rick Haglund: Are some Republicans gearing up for a tax incentive fight next year?

It occurred to me the other day that I’ve been writing about the business tax incentives controversy since the start of my journalism career 45 years ago. I accept your condolences in advance.

One of the early stories I covered in my first job at a northern Michigan weekly newspaper was a request by the owner of a McDonald’s restaurant franchise to abate property taxes on a proposed new store location. 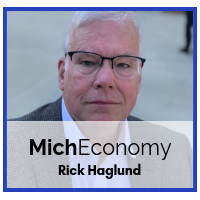 This was in a small town that was hungry for new jobs and business activity, but wasn’t exactly rolling in taxpayer dough to lure them.

A local judge, who was opposed to the request that I recall was ultimately was granted, asked: “Why should we give a tax break to the world’s largest restaurant corporation?”

That pretty much sums up the opposition to the $50 billion state and local governments hand out annually to businesses in exchange for promises of new jobs and investment.

The business attraction incentives debate flares up occasionally in the Legislature, resulting in little reform. But a curious hint that lawmakers could be preparing for action next year is found in a recent Detroit News guest column.

While not citing any specific proposals, they could be referring to a bill introduced this month by Rep. Robert Wittenberg (D-Huntington Woods) that would offer tax incentives to the film industry. Michigan once offered such incentives, but the popular and costly program was eliminated by former Gov. Rick Snyder.

“It’s wrong and it shouldn’t continue,” DeVos and Haworth said about incentive programs that hand out taxpayer dollars to a relatively small number of favored businesses.

Politically, the time would seem ripe to end the economic war among the states for jobs and business investment.

Outrage over Amazon’s brazen effort to extract billions of dollars in tax incentives for a second headquarters and the costly Foxconn debacle in Wisconsin has joined conservatives and liberals in their contempt for taxpayer giveaways to corporations.

But states have so far proven unwilling to end their business development incentive efforts for fear of the political fallout from unilaterally disarming in the fight for jobs. It seems unlikely that Michigan will be the first to wave the white flag.

I suspect that’s not a prospect many lawmakers want to confront.

DeVos and Haworth say that the hundreds of millions of dollars the state spends a year on incentives could be better directed toward funding “citizens’ shared priorities,” such as K-12 education and transportation infrastructure.

That sounds good, but there’s no guarantee lawmakers would invest new money in those areas. It seems more likely that the Republican-controlled Legislature would instead propose returning the money to taxpayers, in line with their small-government ethos.

DeVos and Haworth seem to be hinting at such a move in calling for improvements to the state’s business climate.

The Legislature, they wrote, “should focus its attention on creating an environment that is so attractive for all fundamentally that these one-off ‘corporate welfare’ handouts become unnecessary.” (Re: cut business taxes for everyone.)

Former Republican governors Snyder and John Engler expressed similar goals in their business tax strategies. But they could not eliminate business development incentives, which Snyder called “the heroin drip of government.”

DeVos and Haworth say business development incentives aren’t just wrong, they mostly don’t work. They cite a 2019 book written by Upjohn Institute for Employment Research senior economist Tim Bartik, who found that 75% of businesses seeking incentives for a new facility or expansion would have made the investment without them.

But Bartik, an expert on business development incentives, is not opposed to state and local governments offering them.

Incentives can pay off if they’re targeted at high-unemployment areas, offer shorter terms and awarded to businesses that create spin-off jobs.

“The current Michigan Business Development Program meets those criteria to some extent, although it could be targeted both at higher (job) multiplier businesses and at more distressed places,” Bartik told me.

Effective economic development incentives should also include programs that link unemployed and underemployed people to jobs, he said. In that regard, Bartik likes Gov. Gretchen Whitmer’s Futures for Frontliners program, which offers a tuition-free path to a community college degree for frontline workers in the COVID pandemic.

There is a lot of well-placed anger at costly and unnecessary development incentives given to businesses that overpromise and under-deliver on their job claims. But there is still a place for incentives that are limited in scope and targeted to areas most in need.

Rick Haglund: Are some Republicans gearing up for a tax incentive fight next year?