A Michigan mom is the face of the push to let kids play sports during COVID-19. Her social media is filled with conspiracies.

Jayme McElvany is the organizer of Let Them Play Inc., a group advocating for an end to COVID-19 restrictions halting high school sports. She’s a staple of news coverage on the issue, including the most recent rally at the Michigan Capitol Saturday.

“I feel like a mom to 60,000 kids right now and I couldn’t be prouder of all of them for continuing to battle for their right to play organized youth sports,” the Milan parent told MLive.

The Michigan Department of Health and Human Services (DHHS) recently issued an order extending a pause on winter contact sports until Feb. 21. Most second-wave pandemic restrictions have been lifted — and the ban on indoor dining, which Republicans frequently railed against, is set to end Monday. Now some parents advocating for their kids to resume sports have taken center stage with rallies and a lawsuit threat, part of the months-long fight from a minority of Michiganders who oppose the Gov. Whitmer’s COVID response.

Similar Let Them Play groups have popped up in other states, following the pattern of early anti-lockdown protests that often shared organization from national groups and funders.

The GOP-led House Oversight Committee invited McElvany to testify on the issue on Thursday.

“Families throughout the state have reached out to their elected legislators about the governor’s abrupt decision to extend the ban on certain high school winter sports,” the House committee wrote in a statement. “The House Oversight Committee will listen to testimony in an effort to provide answers to concerned residents regarding the extension.”

The U.S. Centers for Disease Control and Prevention (CDC) last week announced that COVID transmission in school is low if certain precautions are taken — including limiting risky activities like indoor sports and restricting indoor dining.

When she testified maskless in front of the House Oversight Committee, McElvany shared concerns about the mental health of student athletes, criticized the Whitmer administration’s restrictions and mask mandates and questioned the science behind the DHHS COVID-19 data.

Let Them Play hosted its rally in Lansing on Aug. 28, just two weeks after DHHS shut down high school football in Michigan. Less than a week later, football was allowed by the state to continue the season. The group held another rally in December after schools were closed again for an eight-week pause. And another rally took place Saturday at the Capitol.

Attention for the group has been growing. In 48 hours, McElvany said Let Them Play raised $54,000 in donations, which she is deciding where the group will put that money. Let Them Play retained an attorney and is ready to take the state to court over the matter, but McElvany also told the committee the money could go toward paying for students to play out of state.

A look at McElvany’s social media tells a story that hasn’t been told, however. She’s pushed COVID skepticism, debunked election fraud conspiracies and QAnon rhetoric. She also said she was heading from Monroe to Washington, D.C., on Jan. 6, the day of the pro-Trump U.S. Capitol insurrection.

She ran a Facebook group called “Jayme’s Wake Up Call,” which had nearly 2,000 members and was created on Nov. 28. But after the Advance called her Thursday about her posts, the group was taken down. The Advance has screenshots of several posts. She also has posted some similar themes on her personal Facebook page, which remains up.

In posts, McElvany has posted skepticism about COVID, including misinformation about how many people die.

In the group, McElvany stated that she will “give you the most up to date info I have about the election fraud, the virus, Biblical truths, the cabal, the political corruption, world corruption, end times, child sex trafficking, NWO [New World Order]… all the important stuff!” 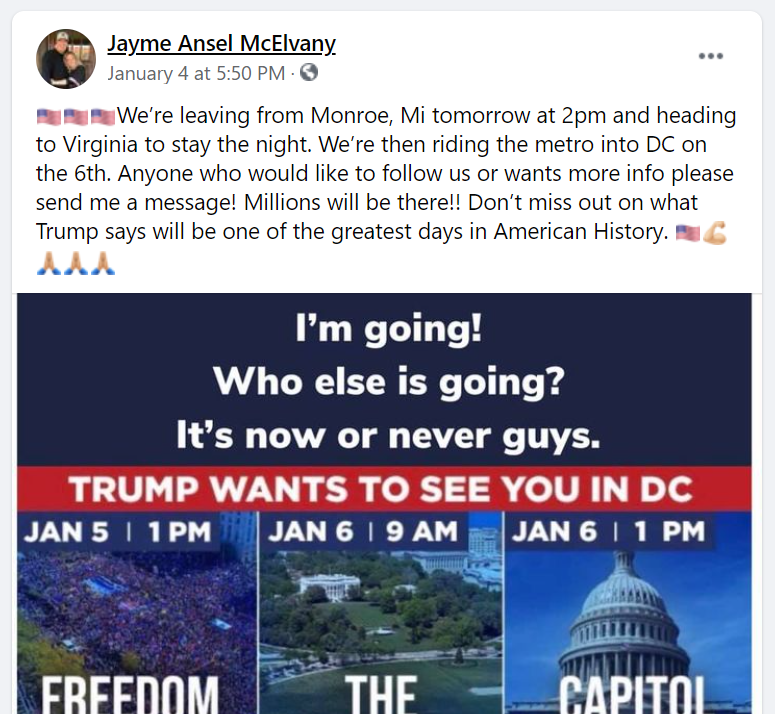 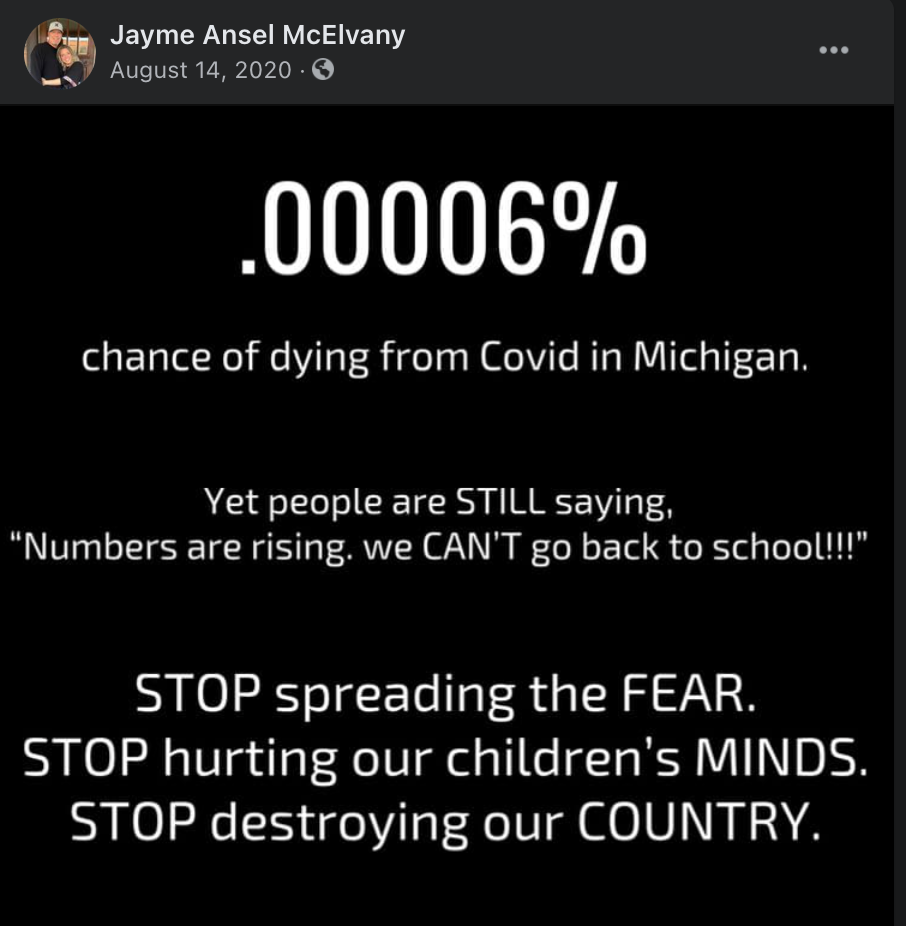 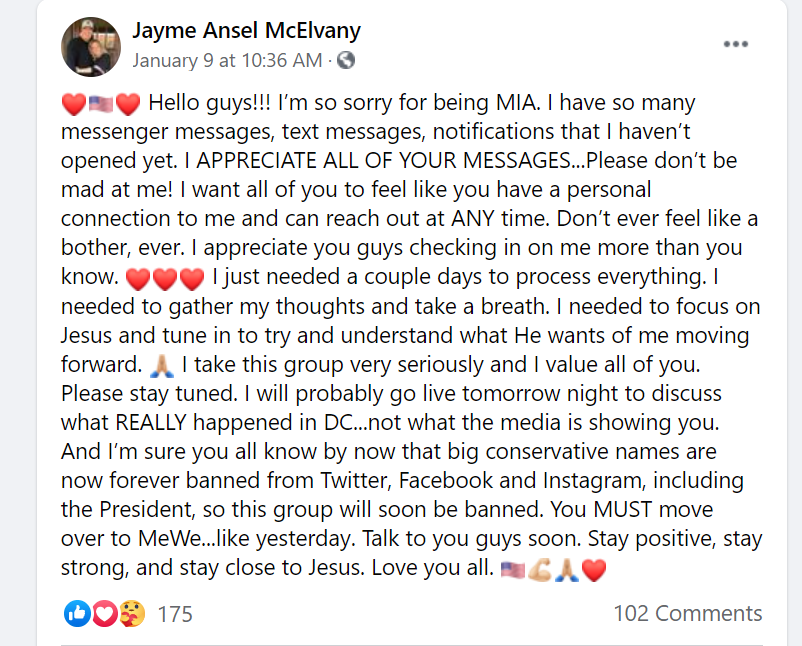 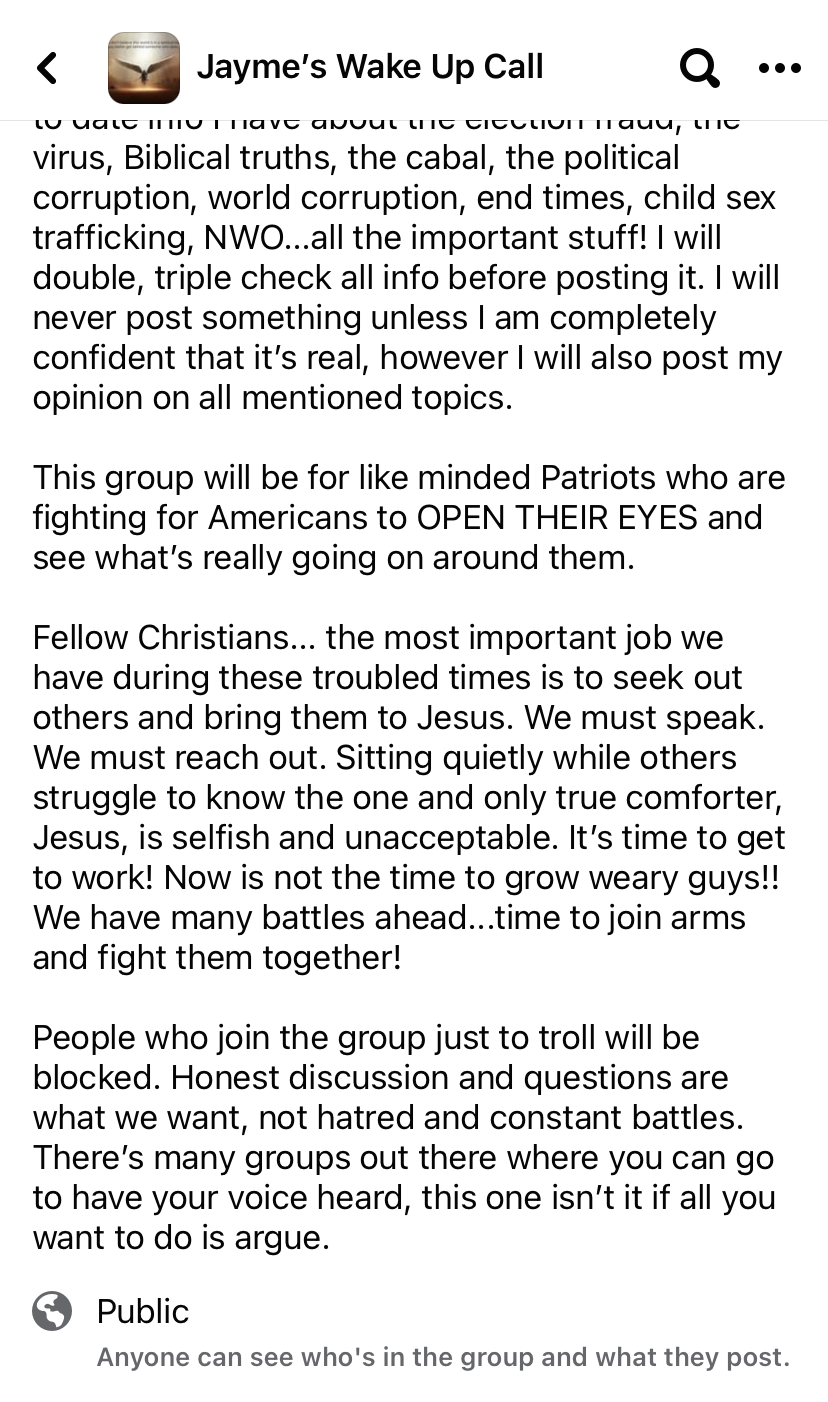 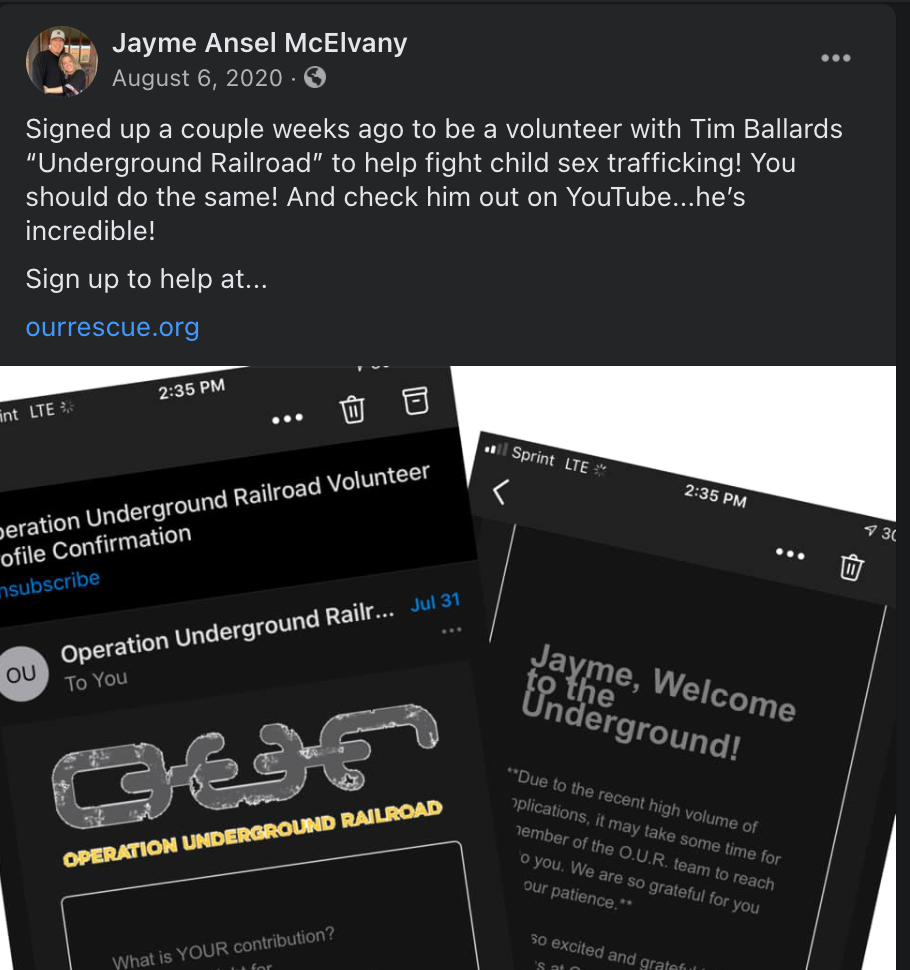 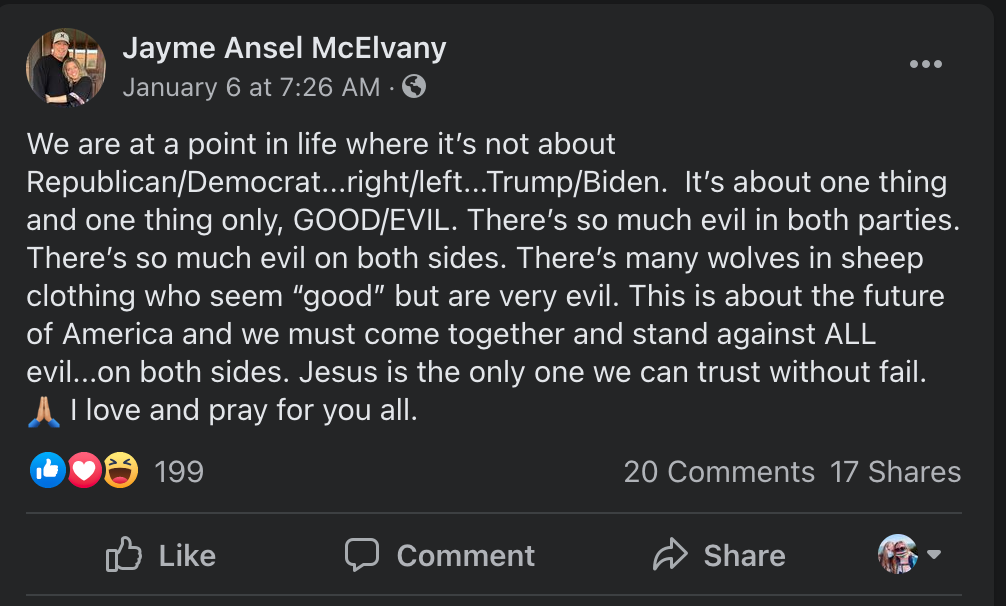 McElvany also shared a live video of her and her husband on their way to Washington, D.C., for the Jan. 6 Trump rally, when thousands of Trump supporters stormed the U.S. Capitol and left five people dead.

On the morning of the Jan. 6 insurrection, McElvany posted in the Facebook group: “Guys … it’s gonna be the most shocking day in American history today. Invite people to the group. Everyone needs to be ready for what’s about to be revealed. I will update you as soon as it happens. Many traitors on both sides. Please pray that all evil gets revealed. Pray pray pray.”

On Jan. 9, McElvany posted that she planned to do a Facebook Live video later the next day to “discuss what REALLY happened in DC … not what the media is showing you.”

McElvany also wrote in the Facebook group description that “this group will be for like minded Patriots who are fighting for Americans to OPEN THEIR EYES and see what’s really going on around them.”

“Fellow Christians… the most important job we have during these troubled times is to seek out others and bring them to Jesus. We must speak. We must reach out. Sitting quietly while others struggle to know the one and only true comforter, Jesus, is selfish and unacceptable. It’s time to get to work! Now is not the time to grow weary guys!! We have many battles ahead…time to join arms and fight them together!”

QAnon, which is an extreme conspiracy group, sprouted up on social media in 2017 when a person, known as Q, anonymously posted on 4chan claiming to be a government insider with intel about a cabal of Democrats running a child-trafficking ring. Over the years, the group’s conspiracies shifted, more recently focusing on election conspiracies and a series of mass arrests that Trump was allegedly planning, called “the Storm.”

QAnon has now been called a domestic terrorist group by the FBI.

When asked in a telephone interview, McElvany denied she supports QAnon and hung up. But whether she attaches herself to the extremist group or not, the themes and rhetoric she posted are consistent with the conspiracy theory.

Neither House Speaker Jason Wentworth (R-Clare) spokesperson Gideon D’Assandro or House Oversight Committee Chair Rep. Steven Johnson (R-Wayland) responded to a request to comment about whether or not McElvany was screened before being invited to speak before the panel last week.

State Rep. Julie Brixie (D-Meridian Twp.), the minority vice chair of the House Oversight Committee, said she wasn’t given a fair warning about Thursday’s meeting and when she asked about who would be speaking, she noticed a prominent voice was left out of the discussion — health experts.

“My experience in other committee hearings has been that the people selected to testify usually are selected and come from a variety of different places. … Of course we’re looking for public input, so you may have engaged citizens who are impacted by whatever you’re talking about, but usually you have the department of the administration if you’re talking about something that is impacted from a department,” Brixie said.

Brixie said that she asked Johnson if Ingham County Health Director Linda Vail could speak during the meeting, but Johnson said she probably wouldn’t be able to have time with the first-come, first-serve system.

A Michigan mom is the face of the push to let kids play sports during COVID-19. Her social media is filled with conspiracies.