The social media review of GOP congressional members in 33 states found a dozen social media posts from the three Michigan U.S. House members, which pushed debunked allegations of election fraud and irregularities. Posts before and after the Jan. 6 insurrection at the U.S. Capitol were included.

“The Article of Impeachment expressly discussed the prohibition of Section 3 of the 14th Amendment to the Constitution on any person who has ‘engaged in insurrection or rebellion against’ the United States from ‘hold[ing] any office … under the United States,’” Lofgren writes in her forward to the review.

“Like former President Trump, any elected Member of Congress who aided and abetted the insurrection or incited the attack seriously threatened our democratic government. They would have betrayed their oath of office and would be implicated in the same constitutional provision cited in the Article of Impeachment. That provision prohibits any person who has previously taken an oath as a member of Congress to support the Constitution but subsequently engaged in insurrection or rebellion from serving in Congress.”

Lofgren, who is in her 14th term in Congress, noted in the report that she has participated in all four modern presidential impeachment proceedings, as well as multiple congressional proceedings to consider removal of officials in all three government branches.

She asked her staff to compile public statements made by congressional members in the weeks before and after the Jan. 6 attack, so those pieces of evidence could be made available should Congress consider punishment for members who supported insurrection and/or exhibited otherwise disorderly behavior. 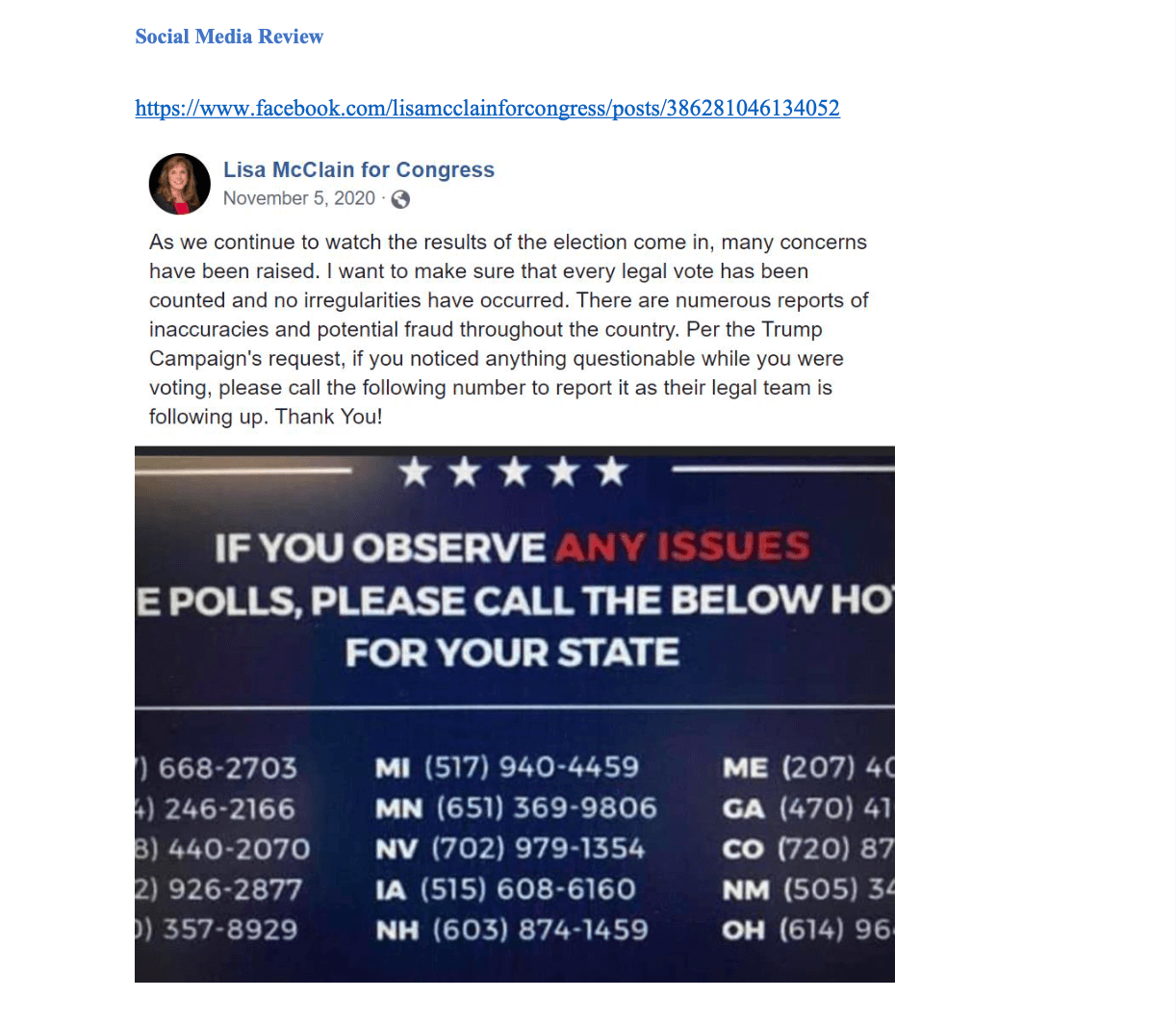 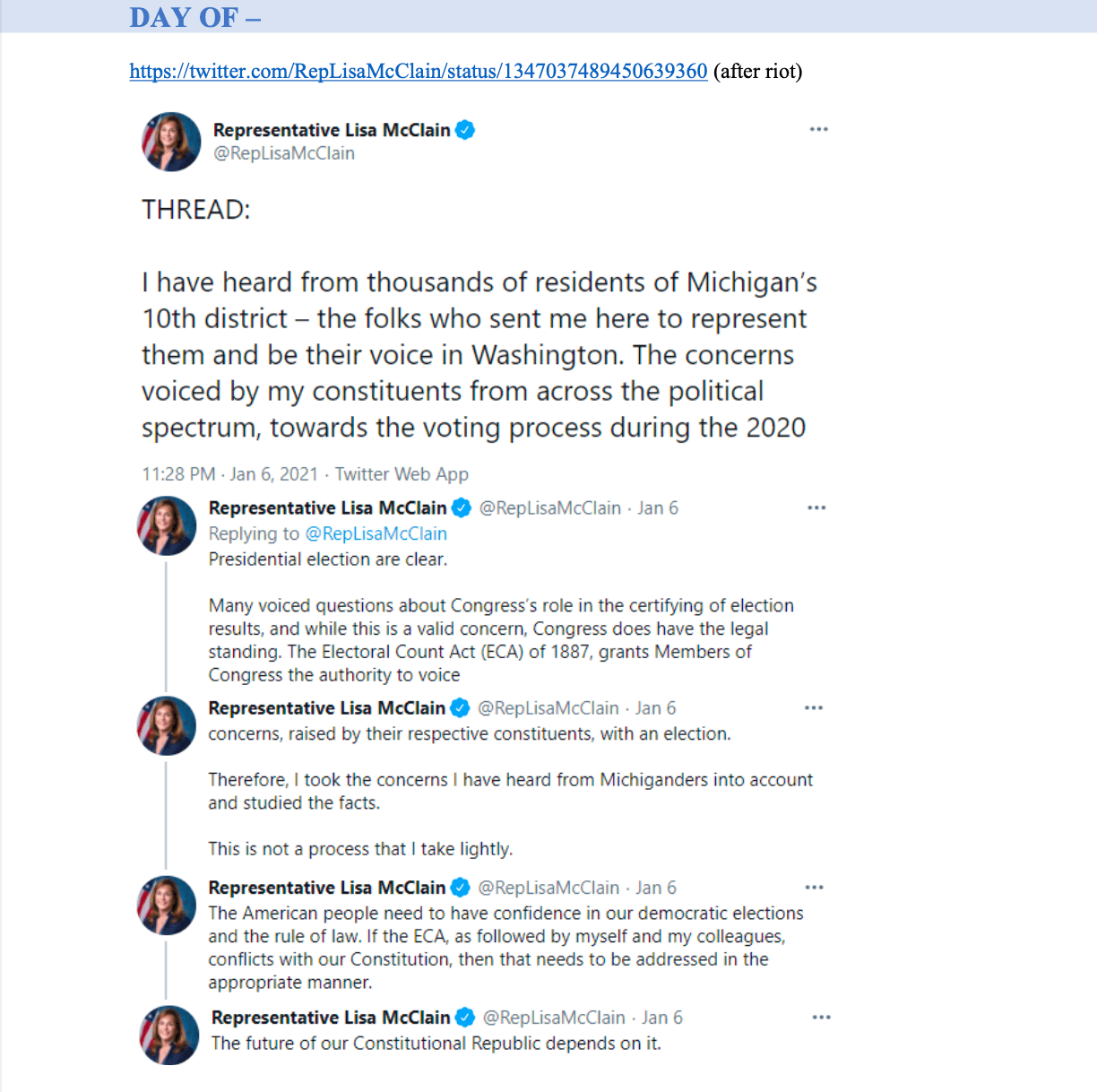 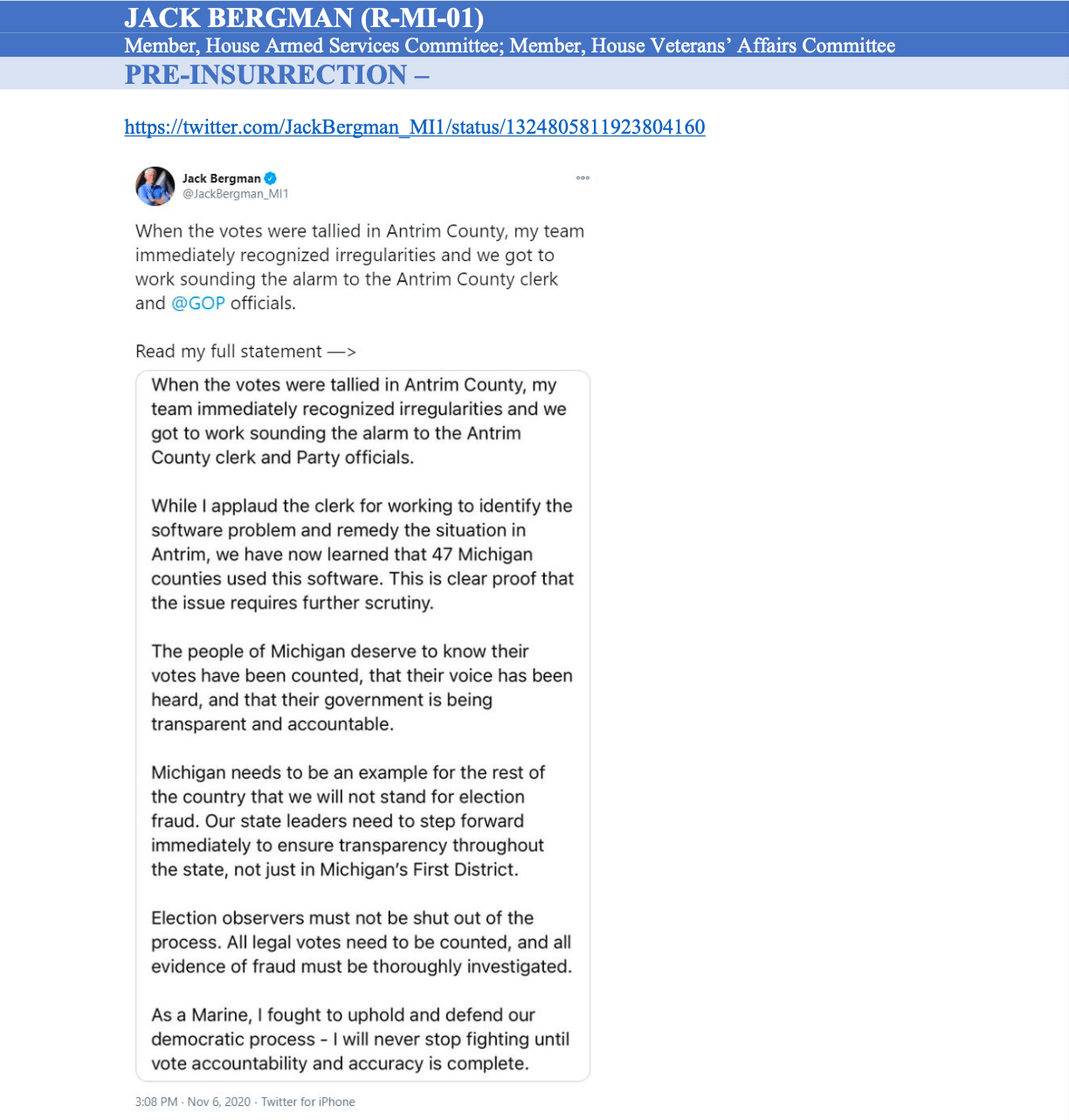 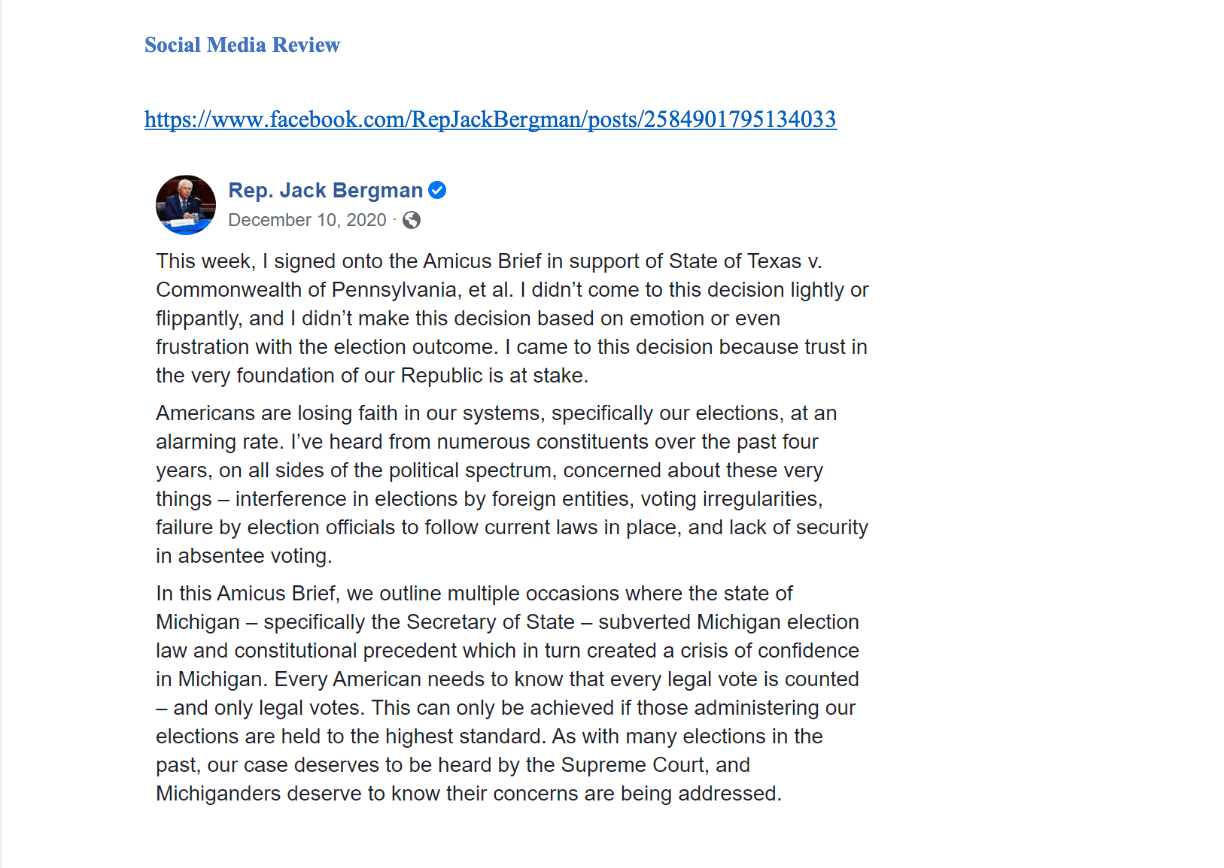 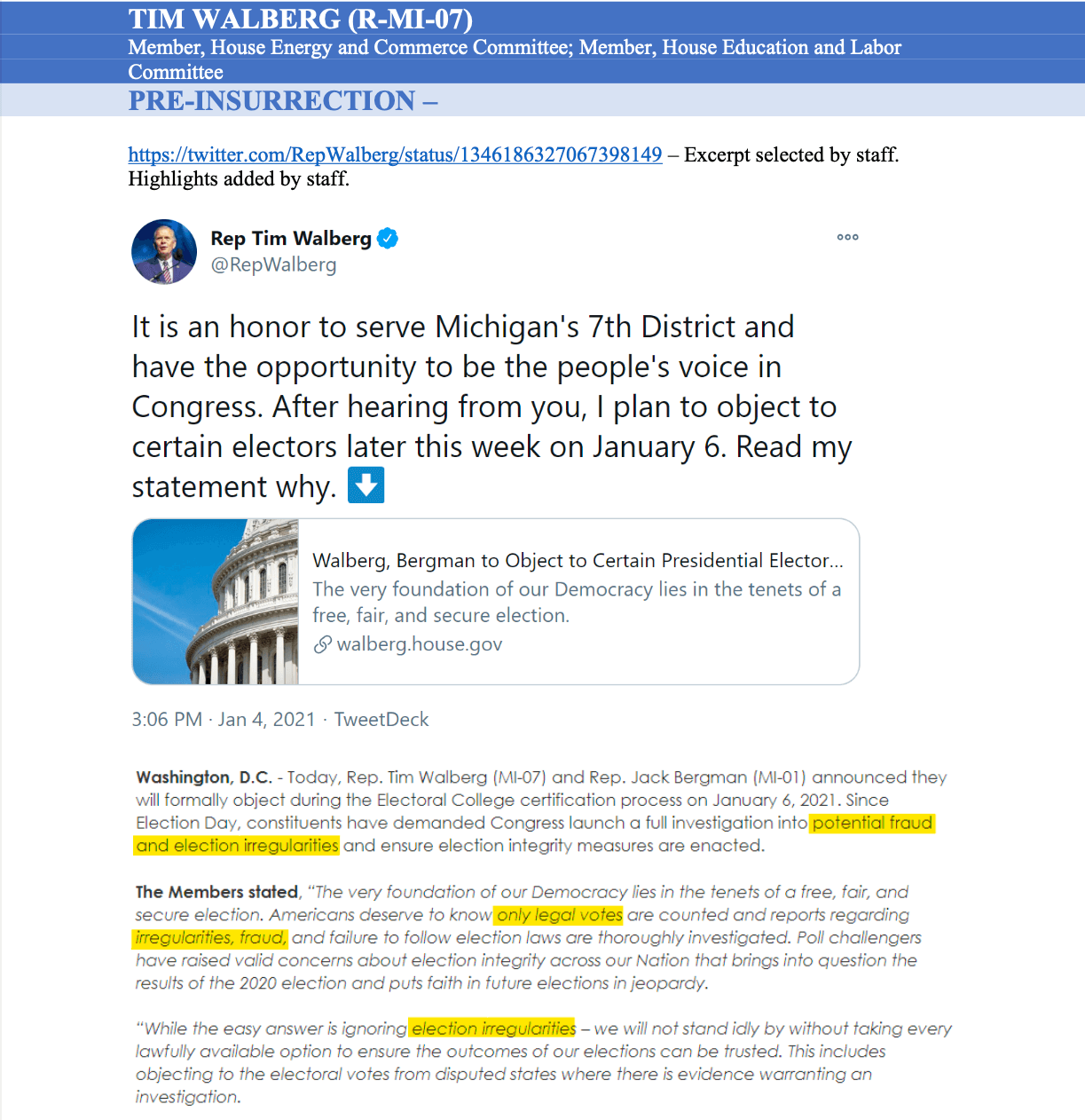 Bergman posted twice before the insurrection, including about Antrim County on Nov. 6 while alluding to widespread election fraud in Michigan. The northern Michigan county became the subject of many right-wing conspiracy theories and lawsuits when presidential election results were first incorrectly entered to show a Biden lead, which was quickly corrected. He also emphasized that “legal votes” need to be counted — a favorite phrase of Trump’s that implied many voters cast their ballots illegally, although his former Attorney General, Bill Barr, did not find evidence of widespread voter fraud.

Bergman also wrote in a Dec. 10 Facebook post an explanation of why he signed onto the since-failed Texas court case challenging the results of the election in key states including Michigan.

“In this Amicus Brief, we outline multiple occasions where the state of Michigan – specifically the Secretary of State – subverted Michigan election law and constitutional precedent,” Bergman wrote.

Walberg also released a statement on Twitter announcing his plan to object to the Electoral College vote. In it, he referenced “election irregularities,” “legal votes” and “fraud.”

McClain, who is a freshman, posted the most about election conspiracies before Jan. 6 with four posts pre-insurrection — calling the election results into question, claiming widespread fraud, telling a local reporter she wasn’t sure who won the election and asking for more Trump volunteers in Michigan.

McClain also was the only one of the three Michigan Republicans in the report to post on the day of the insurrection. At around 11:30 p.m. Jan. 6, after the events at the U.S. Capitol had already unfolded, McClain tweeted out a thread on her objections to the Electoral College vote.

“If the ECA [Electoral Count Act], as followed by myself and my colleagues, conflicts with our Constitution, then that needs to be addressed in the appropriate manner. The future of our Constitutional Republic depends on it,” McClain wrote. She did not mention the insurrection itself or condemn the violence in D.C.

Both McClain and Walberg posted at least once after the insurrection about related issues.

On Jan. 12, McClain tweeted out a video of her speaking before the U.S. House and condemning Democrats’ attempts to impeach Trump for the second time, this time over inciting the insurrection.

One day after, she boosted her own op-ed in The Hill arguing against impeachment; and on Jan. 21, McClain claimed “media bias” for publications calling left-wing Portland protests against U.S. Immigration and Customs Enforcement (ICE) “demonstrations” while calling the right-wing insurrection at the U.S. Capitol a “riot.”

Walberg posted once about the Electoral College certification one day after the insurrection. On Jan. 7, Walberg tweeted out a statement condemning “lawbreaker[s]” at the U.S Capitol but also referencing “unresolved concerns regarding irregularities” in the electoral process.

The offices of McClain, Bergman and Walberg did not immediately return requests for comment.