Imagine the Great Lakes 20 to 40% lower, thwarting commercial shipping, impairing recreational boating and fishing, leaving beaches and docks high and dry. Imagine 45% of Michigan’s population forced to pump water from lakes or streams many more miles away to supply their drinking water needs, while drawing down those already depleted water bodies. And imagine farmers and manufacturers having to spend millions of dollars simply to acquire and move the irrigation and process water they need to grow crops, make products and create jobs. 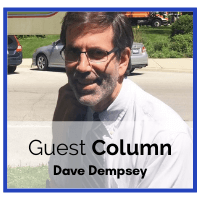 Imagine, that is, the state of Michigan without groundwater.

It’s a “Twilight Zone” script, of course — Michigan has abundant groundwater — but it dramatizes the importance of a resource that our state takes for granted and that is increasingly under threat.

A visual illustration of that complacency was the infamous “green ooze” that flowed onto the shoulder of I-696 in Madison Heights in December 2019. Traced back to an adjacent abandoned chemical handling site, the groundwater became contaminated by high levels of hexavalent chromium, trichloroethylene and PFAS, and flowed offsite to create a vivid display that drew media attention. Taxpayers have shelled out at least $4.6 million to clean up the private pollution.

Thousands of sites across the state are in similar condition — and many are much more menacing, if less visible. Creeping offsite, contaminated groundwater can volatilize into indoor living and working spaces, or pollute nearby drinking water wells. State policy allows those who contaminate groundwater, or who own property that is the source of the polluted groundwater, to ban use of the site rather than clean it up. But groundwater doesn’t sit still and clean itself up. Unseen, it often moves offsite with persistent chemicals that spread and remain a threat for decades or longer.

For the Love of Water (FLOW) has now completed two reports analyzing the state’s deficient groundwater policies and recommending reforms, available online at ForLoveOfWater.org. A key recommendation we make is passage of a state Groundwater Protection Act.

Michigan law views groundwater from the vantage point of how much of it we can sacrifice, instead of how much we must protect. Rather than establish an overarching protection policy, our statutes treat groundwater as something available for assimilating pollution. Scattered among our laws are provisions allowing differing treatment of groundwater depending on the pollution source – landfills, oil and gas development, underground injection of hazardous wastes, permitted discharges, agricultural pollution, management of contaminated sites and more.

This is no way to treat a source of water that is critical for hydration and sanitation for 45% of Michigan’s population, but also crucial to cold water flow into trout streams, maintenance of rare wetlands, and a supply for farms and businesses. But because it is out of sight, groundwater lacks critical protections.

There is no state sanitary code requiring periodic inspections and maintenance of on-site septic systems, leaving an estimated 130,000 such systems releasing human and chemical waste to groundwater and surface water. There are no effective controls on nitrate pollution of groundwater from agricultural sources. Continuing use of chemicals, such as TCE, contributes to widespread groundwater contamination. There is no effective statewide groundwater monitoring system or testing program for the state’s 1.25 million private drinking water wells.

Michigan prides itself on superior water stewardship. But the state cannot make that claim without a new approach to groundwater. That would include everything from articulation of a single, protective state groundwater policy to passage of legislation pending in the Michigan Senate and House of Representatives requiring that parties responsible for groundwater pollution clean up their contamination unless this is technically infeasible, and adoption of a state sanitary code legislation.

Groundwater feeds the Great Lakes, fuels the economy and fulfills our need for drinking water. It serves us well. It is time we return the favor so that current and future generations can depend on its quality and quantity.

Dave Dempsey is currently Senior Policy Advisor at FLOW (For Love of Water), an environmental law and policy center in Traverse City. He has 35 years' experience in environmental policy. He served as environmental advisor to former Michigan Gov. James Blanchard and as policy advisor on the staff of the International Joint Commission. He has also provided policy support to the Michigan Environmental Council and Clean Water Action. He has authored several books on the Great Lakes and water protection.