Tribal citizens on a 20,000-mile, cross-country journey to highlight sacred Indigenous sites and call on President Joe Biden’s administration to protect them made their ninth and final stop in Mackinaw City this week.

The activists were met and welcomed Tuesday morning by Native people from numerous tribes across Michigan, including the Sault Ste. Marie Tribe and the Bay Mills Indian Community, who together called on Biden to shut down the Enbridge-owned Line 5 oil pipeline running under the environmentally sensitive Straits of Mackinac.

The effort, dubbed the “Red Road to DC,” will culminate Thursday at the National Mall in D.C., where a 25-foot, 5,000-pound totem pole carved by members of the Lummi Nation will be delivered to U.S. Interior Secretary Deb Haaland for the Biden administration.

Haaland is a member of the Laguna Pueblo tribe and the country’s first Native American cabinet secretary.

The group is led by the Lummi Nation’s House of Tears Carvers, Se’Si’Le, Native Organizers Alliance, IllumiNative and the Natural History Museum.

“Today we had the opportunity to welcome the Lummi Nation’s House of Tears Carvers to the Odawa, Ojibwe and Potawatomi lands here in the Great Lakes, and here in our sacred territory at the Straits of Mackinac,” Bay Mills Tribal Chairperson Whitney Gravelle said during Tuesday’s event.

“… Time and time again, we must fight for what was promised to our ancestors in the treaties.”

“We aren’t the only ones at risk from the devastating effects of a pipeline spill. Fishermen, the tourism industry, our Michigan economy are all endangered if Line 5 continues to operate in our waters. President Biden must address this crisis immediately,” Gravelle continued.

A spokesperson for the White House did not respond to a request for comment.

“Engagement with and respect for Tribes and Indigenous peoples where we do business is very important to us,” Enbridge spokesperson Ryan Duffy said Wednesday. “Enbridge recognizes the legal rights of Indigenous Peoples and the important relationship they have with their traditional lands and resources. We work with Indigenous communities in a manner that recognizes and respects these rights.

“Enbridge looks for opportunities to engage with Tribes even where there is no formal construct designed by federal or state agencies. We work hard to engage Indigenous communities and are committed to doing so,” Duffy added.

The journey began on July 14 in Northwest Washington state, where tribal activists on Lummi Nation land highlighted the many threats facing orca whales. Orcas are revered and considered kin by the Lummi and many other Coast Salish tribes.

In Idaho on July 15, the group called attention to efforts by the Shoshone-Bannock Tribes in Idaho to protect and restore wild salmon in the Columbia and Snake Rivers.

On July 17, the trip stopped in Utah to advocate for the proposed Bears Ears National Monument, which is under consideration by the Biden administration and would protect the natural landscape from further desecration. 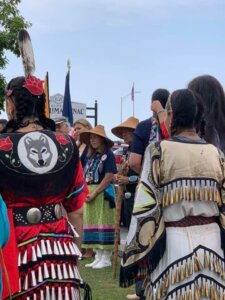 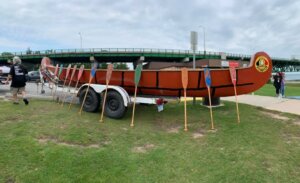 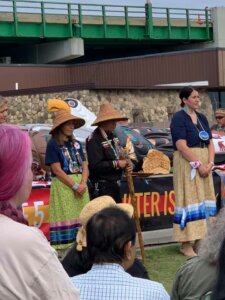 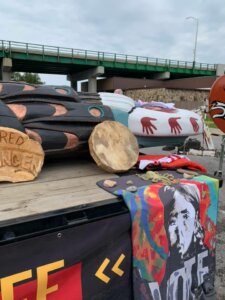 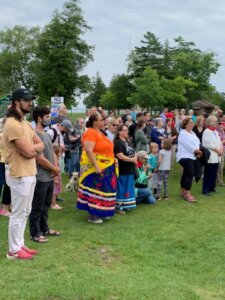 The next day in Chaco Canyon, N.M., activists highlighted oil and gas activities that are encroaching on the sacred archaeological and cultural site.

July 18 was a stop in the Black Hills, which stretch across South Dakota, as well as some of Wyoming and Montana. The lands are sacred for the Lakota, Northern Cheyenne and Omaha people, but face threats like mining and logging. Native people also say that Mount Rushmore is a symbol of colonization and its area should be returned to the Lakota.

On Thursday, the group made another stop in South Dakota at the Missouri River. Dakota/Lakota/Nakota communities there are fighting for their inherent Indigenous rights over the land and water, and for measures to protect the water from projects like oil pipeline construction.

The trek continued on Saturday when activists gathered in Standing Rock, N.D., where thousands of Native citizens and their supporters had protested against the proposed Dakota Access Pipeline (DAPL) in 2016. Now, oil continues to flow through DAPL on tribal lands while the Standing Rock Sioux Tribe continues to oppose it.

The second-to-last stop before D.C. on Sunday was in White Earth, Minn. There, Anishinaabek water protectors are engaged in ongoing protests against Enbridge’s attempts to build a replacement for its Line 3 oil pipeline through many different tribal lands and waters.

Finally, the tour finished up on Tuesday in Mackinaw City overlooking the Mackinac Straits. Indigenous water protectors in Michigan came out to support the movement while speaking out against the 68-year-old Line 5 oil pipeline.

Other sacred sites not physically visited on the trek were featured in virtual events, including the Grand Canyon, Tongass Forest, Arctic National Wildlife Refuge and more.

“We are bringing together the voices of over 17 [tribal] nations that are fighting to protect their sacred places, and we’re taking it to D.C. to remind the Biden Administration of their responsibilities to protect land and water,” said Judith LeBlanc, director of the Native Organizers Alliance and member of the member of the Caddo Tribe of Oklahoma.

All 12 tribes in Michigan oppose the Line 5 oil pipeline and its proposed tunnel-enclosed replacement by Enbridge. The Canadian company and the state of Michigan are currently locked in a legal battle over which court — state or federal — should decide whether to uphold or strike down Michigan Gov. Gretchen Whitmer’s shutdown order.

Whitmer had issued the order in November based on numerous and “incurable” violations by Enbridge of its 1953 easement with the state. The Democratic governor gave the company until May 12 to cease operations through Line 5, but Enbridge has refused to comply unless the state wins a court order to back Whitmer’s directive.

Mediation in the case is set to wrap up in late August.