Harold McLemore, 93, grew up in the community known as Black Bottom and told the Advance he was pleased to see a Michigan Historical Marker finally placed at the legendary site.

“I feel good,” said McLemore, pointing to where his childhood home, 1236 Rivard Street, once sat only a few hundred feet away.

“So much of what we have today came from this area,” said Duggan during the outdoor event.

Detroit’s African-American population skyrocketed from roughly 5,700 in 1910 to 120,000 in 1930. Many Black residents from that period lived in the Black Bottom area, located east of downtown Detroit, alongside European immigrant families who had lived in the neighborhood going back to the 19th century. In 1942, the Detroit Urban League reported that within Black Bottom and Paradise Valley, the Black commercial district located immediately north, there were more than 300 Black-owned businesses, which included physicians, barber shops, hair salons, hotels, drug stores and more.

By the 1930s, Black Bottom was a predominantly Black neighborhood and a large portion of it was poor. Detroit city government, led primarily by former mayors Edward Jeffries Jr. and Albert E. Cobo, razed Black Bottom during the 1950s and early 1960s, using the condemnation process to acquire and redevelop the land. 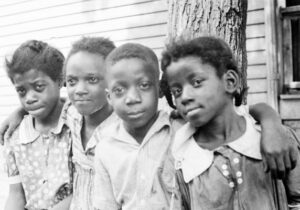 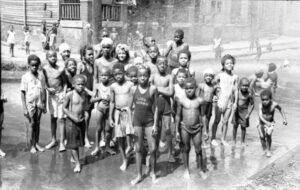 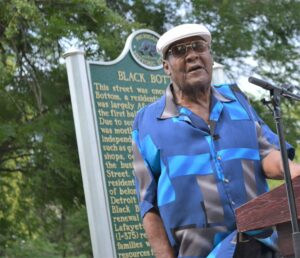 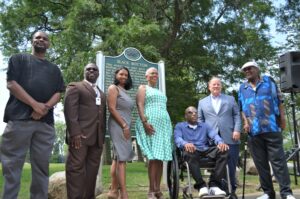 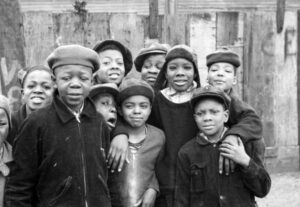 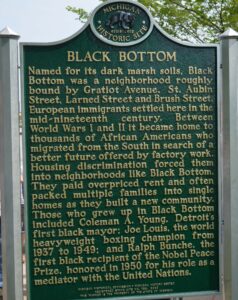 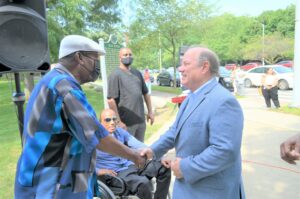 Jeffries asked the Common Council, the city’s legislative branch in April 1946 for authority to demolish the Black Bottom neighborhood in the name of urban renewal. However, discrimination in real estate, banking, and local government made it virtually impossible for African Americans to move to other sections of the city. Many of them saw the so-called “urban renewal,” as Negro removal.

Black Bottom was replaced with Lafayette Park, a middle-class and largely white residential district. By 1964, the Chrysler Freeway, I-75, ran through the former neighborhood.

Black Bottom’s notable residents included Charles Diggs Jr, who became Michigan’s first Black U.S. House member in 1955; Coleman Young, a former state senator and Detroit’s first Black mayor who began serving in 1974; actress and recording artist Della Reese; and Zeline Richard, a teacher and an official with the Detroit Federation of Teachers and the Michigan Democratic Party during the 1960s and ‘70s.

Smith, whose grandmother lived in the community, thanked city and state governments for supporting his effort to erect the marker.

Michigan’s state parks have needed repairs for years. Then… by Marla R. Miller December 11, 2021
Here's the full text of Biden’s State of the Union address by Michigan Advance March 2, 2022
In wake of Lyoya’s death, a reckoning with Grand Rapids’… by Anna Gustafson May 7, 2022