The Senate Education and Career Readiness Committee hearing was paused at one point by Chair Lana Theis (R-Brighton) after a tense confrontation between Sen. Dayna Polehanki (D-Livonia) and Sen. Kim LaSata (R-Bainbridge Twp.).

Senate Bills 600-603 were voted out of committee favorably, with each passing 4-1. The lone Democrat present, Polehanki, voted against the package, as state Sen. Erika Geiss (D-Taylor) had to depart the meeting early.

The bills were originally introduced in late July by Theis, LaSata and state Sen. Tom Barrett (R-Potterville). All four bills will now go to the full Senate for consideration.

As of Monday, the state reports that a total of 976,505 Michiganders have tested positive for COVID-19 and 20,535 have died from the virus — and 101 pre-kindergarten-12 schools and eight universities are reporting new or ongoing COVID-19 outbreaks.

Out of those, 11 pre-K-12 schools have outbreaks of 10 cases or more. The state has warned that large outbreaks can occur in schools without appropriate mitigation measures. Vaccines have not yet been approved for children under 12 years of age.

Earlier this month, the DHHS recorded a 19% increase in the number of COVID-19 cases among 0 to 9 year olds in a single week. That same week saw an 11% jump in case numbers among 10 to 19 year olds.

Similar trends are happening nationwide, with the American Academy of Pediatrics and the Children’s Hospital Association reporting this month that child cases have increased “exponentially” with nearly 500,000 cases in the two weeks leading up to Sept. 9.

For the week ending Sept. 9, children under 18 made up about 29% of reported weekly COVID-19 cases nationally, despite making up 22.2% of the U.S. population.

Regardless, the hearing was dominated by activists firmly opposed to any sort of mask, testing or vaccine requirements for their children at school.

SB 600 sponsored by Theis would prohibit schools from requiring students to be vaccinated in order to enter or attend the school, ride a school bus and attend school-sponsored events. It would also prohibit “discrimination” against non-vaccinated students, including the implementation of “segregated seating” and requiring face masks for unvaccinated students.

Theis’ second bill, SB 601, would further prohibit schools from similarly “discriminating” against asymptomatic students who have not been tested for COVID-19. Barrett and LaSata’s Senate bills 602 and 603 would prohibit the DHHS from enacting similar measures regarding vaccinations, face masks and testing for schools.

Barrett told the GOP-dominated committee that he wants children to be protected from COVID-19, but also doesn’t want Michiganders’ constitutional rights to be subordinated. Barrett contracted COVID last year.

There is currently no statewide mask mandate in place for K-12 schools. Although Gov. Gretchen Whitmer has signaled her support for individual schools and districts that choose to implement their own, she has said that she and the Michigan Department of Health and Human Services (DHHS) have no plans to establish a statewide version.

Similarly, there are no school or state mandates requiring vaccinations.

Despite this, speakers testifying in support of the bill package on Tuesday railed against “unelected tyrants” at DHHS attempting to infringe upon their child’s bodily autonomy because certain Michigan schools require students to wear masks.

Both Democrats on the committee, Geiss and Polehanki, wore face masks. Republican lawmakers, along with the large group of anti-mask and anti-vaccine activists who showed up to support the bill package, did not.

Polehanki pointed to COVID-19 outbreaks in public schools, and particularly recent outbreaks in LaSata’s district, while questioning LaSata about her staunch opposition to COVID-19 mitigation efforts in schools.

The argument quickly turned heated, with both lawmakers raising their voices. LaSata said it’s wrong that she doesn’t have the right to refuse a mask, but has the right to “kill my child” if she wishes to get an abortion. 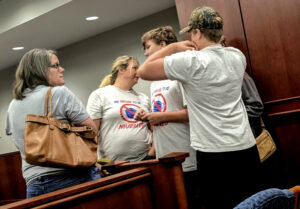 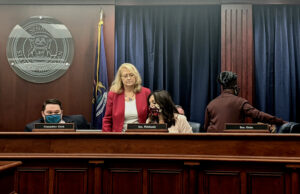 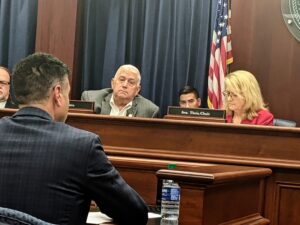 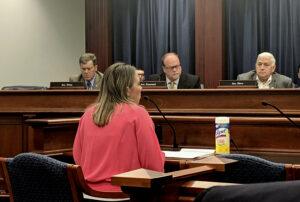 “I’m 90 minutes from Chicago and more kids are dying there from gunshots than COVID,” LaSata said, which Polehanki swiftly rebuked.

In May 2020, LaSata had a similarly heated exchange about COVID-19 with state Sen. Adam Hollier (D-Detroit). “I am not Detroit,” LaSata said while arguing against COVID-19 restrictions outside of the hard-hit Southeast Michigan region.

LaSata later tested positive for COVID-19 in November. Some of her Senate colleagues, including Hollier, criticized her at the time for still attending meetings (sometimes unmasked) while awaiting her test results, potentially allowing spread of the virus.

Speaking with the Advance afterwards, Polehanki said the hearing was “frustrating.”

“This is the Michigan Senate. This is not a school board meeting,” said Polehanki, a former teacher. “We’re not going to devolve into unrelated topics. [LaSata] tried to bring up guns and abortion, and it’s just a sign of a weak argument.”

Polehanki said that there were so many errors in speakers’ testimonies that she couldn’t refute them all, and wished she could have been allowed to challenge LaSata further on whether the Republican supports any kind of mitigation at all for schools.

“Lots of anecdotes today. A little light on the science,” Polehanki said.

Among the anti-mask speakers was Jayme McElvany, organizer of the controversial “Let Them Play Michigan” group that initially rallied against restrictions for high school sports during the start of the pandemic. Now, McElvany says her group is raising money to support parents who file lawsuits in opposition to mask mandates and other COVID-related requirements for their children.

McElvany has drawn criticism for having a social media presence rife with COVID-19 conspiracy theories, debunked 2020 election fraud conspiracies and QAnon rhetoric, as the Advance first reported. Her personal Facebook was also locked at one point for violating the site’s community standards, and Facebook removed some posts and comments from her group’s page for the same reason.

McElvany also alluded to traveling to Washington, D.C. on Jan. 6, the day of the violent right-wing insurrection at the U.S. Capitol, posting on social media that morning that it would be “the most shocking day in American history” and asking followers to “pray that all evil gets revealed.”

No opponents of the bill package spoke in person before the Senate committee Tuesday, which Polehanki argued was due to the meeting’s late notice. But several expressed their opposition through cards read by the Senate clerk.

Among those against Senate bills 600-603 are the Michigan Department of Education (MDE), the Michigan League for Public Policy (MLPP) and the Michigan Association of Superintendents and Administrators (MASA).

“Eighteen months into this pandemic, our local schools, health departments, and the state need all of the options on the table to stop the spread of COVID-19, to keep our kids in school safely, and to give them the best opportunity to learn,” MLPP spokesperson Alex Rossman said in an email.

“We should not be taking away these options at such a critical point as we work to emerge from this public health crisis.”