“We finally have the opportunity to pass something,” said Cindy Reese. “Pass the dang-on bill. This bill is really what we need.” | Ken Coleman

“Government is about people,” said U.S. Rep. Rashida Tlaib (D-Detroit) during one of the rallies held at Pallister Park in Detroit. “We’re supposed to be about investing in people, in families and in children.”

Mary Freeman, the wife of U.S. Rep. Andy Levin (D-Bloomfield Twp.), attended the Warren rally on his behalf, according to Levin’s district office.

On Aug. 24, the U.S House of Representatives passed the legislation. It is now being debated in the U.S. Senate. Two centrist Democrats, U.S. Sens. Joe Manchin of West Virginia and Kyrsten Sinema of Arizona, oppose parts of the plan and have called for less spending. The U.S. Senate is split between those who vote with Democrats and those who vote with Republicans, with Vice President Kamala Harris, a Democrat, holds a tie-breaking vote. 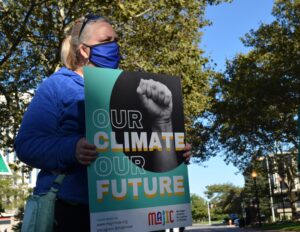 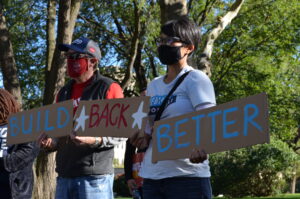 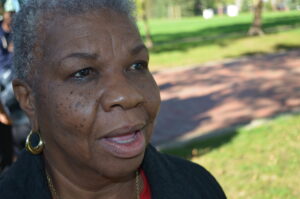 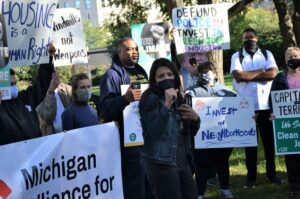 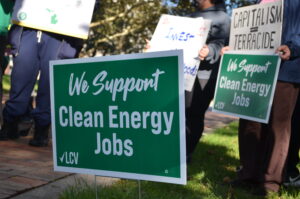 Aisha Wells of Mothering Justice, a social-action nonprofit, called for Congress to support the measure.

Cindy Reese of Metropolitan Organizing Strategy for Enabling Strength, better known as MOSES, a metro Detroit social action group, said that millions of Americans would benefit from the legislation and can not believe that some Senate Democrats “are on the fence” regarding the legislation.

“We finally have the opportunity to pass something,” said Reese. “Pass the dang-on bill. This bill is really what we need.”

A call to the Michigan Republican Party on the events was not returned.

Americans in climate-threatened regions anxious for… by Laura Cassels November 1, 2021
‘This could set women back generations’ by Anna Gustafson April 7, 2021
After being reshaped by extremism, Houghton County… by Todd A. Heywood March 10, 2021