Carrying signs emblazoned with “patients over profits,” hundreds of nurses and other health care providers marched outside Sparrow Hospital Wednesday evening to call for fairer wages and benefits needed to retain and attract the workers that union representatives said the hospital has been “hemorrhaging” during the COVID-19 pandemic.

“Now is our time to stand up and speak out for what we deserve: fair pay, affordable health insurance and a safe environment in which to work,” said Katie Pontifex, a Sparrow Hospital nurse and the president of the Professional Employee Council of Sparrow Hospital (PECSH). The PECSH represents about 2,200 Sparrow workers and is a local subset of the Michigan Nurses Association.

The union-organized “informational picket” on Wednesday — meaning no participant took time off from work to attend — comes days after the contract for Sparrow’s nurses and other health care providers expired on Oct. 30.

The hospital and caregivers have until Friday to ratify a current contract offer, which union organizers said will likely not happen because it includes a 12% spike in health insurance costs for workers and a 4% wage increase that staff said does not reflect cost of living increases. The contract offer will make it increasingly difficult to retain and attract workers, union representatives said, noting that the hospital needs at least 90 more nurses to have a full staff.

If you are awake in 2021, you know this is a workers’ revolution right now. Every corner of the state is on fire.

“Staffing is a huge problem, and it’s a recruitment and retention issue,” said Julie Mason, a clinical laboratory scientist in Sparrow Hospital’s microbiology department. “We are short-staffed. You see nurses at the end of their shifts parking their cars and just crying. It’s just not OK.

“The short staffing hasn’t been a new problem, and it’s been exacerbated during COVID,” Mason continued. “Nurses are having to do more with less. Instead of taking care of their two or three patients, now it’s four, five, six, seven, eight, nine patients. It’s ridiculous. They can’t keep doing that.”

In addition to the stress of working while short-staffed during the pandemic and health care workers increasingly facing aggressive and violent patients and families, caregivers said they also lost benefits from their employer during COVID-19.

A longevity bonus allows workers who have reached the top of their pay scale to receive bonuses in lieu of a wage increase; staff said such a bonus is crucial to attracting and retaining staff.

“Sparrow has the highest respect for all our caregivers, and we value them and the work they do every day to care for patients and families,” the hospital said in its statement. “Like health systems across the country, we continue navigating staffing challenges but remain committed to staffing ratios that are consistent with, or better than, peer hospitals and meet or exceed legislation mandating caregiver staffing ratios in other states. 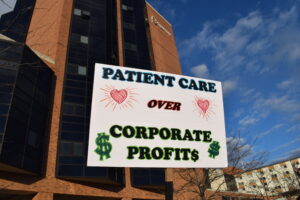 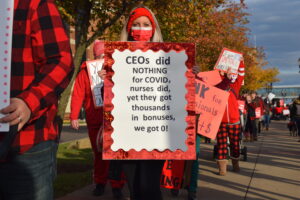 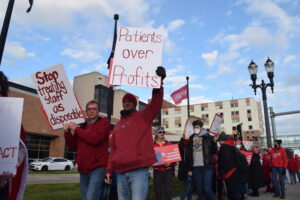 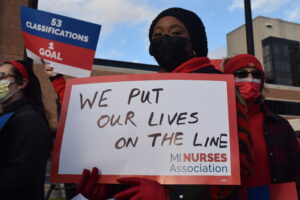 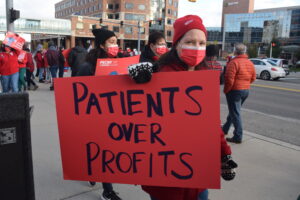 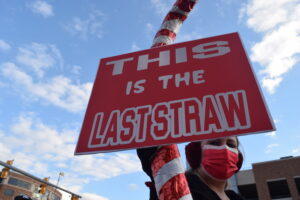 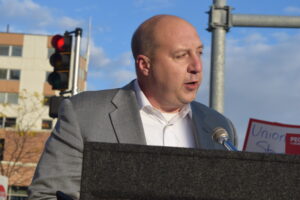 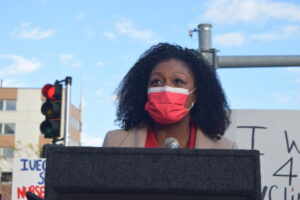 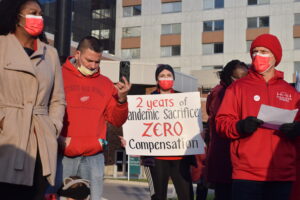 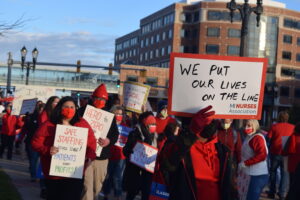 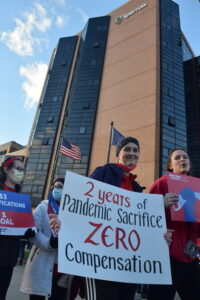 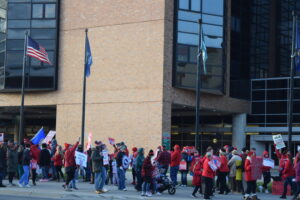 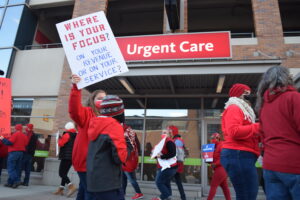 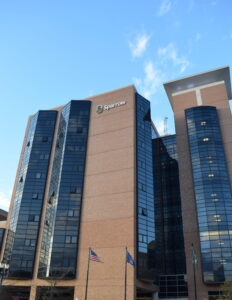 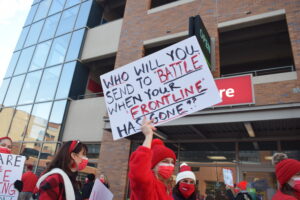 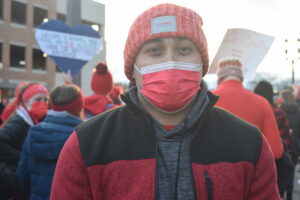 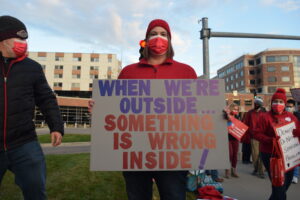 “At the bargaining table, we have made several proposals to help improve our staffing levels and outside of negotiations we continue to post, approve and interview for positions,” Sparrow continued. “We also recruit and retain caregivers by participating in dozens of career fairs each year, recruit at schools around the state, offer referral, sign on and retention bonuses and reward caregivers who commit to additional shifts with cash bonuses up to $10,000, among many other initiatives.”

Those recruitment and retention efforts, however, are not working, nurses said.

“In the ER, we’ll work ourselves to the bone to get our work done [because of staffing shortages], but you can only sustain that for so long,” said LJ Knight, a nurse in Sparrow’s emergency room. “We’re losing experienced nurses. Either they’re retiring early or leaving the profession altogether.”

Pontifex said the hospital is “hemorrhaging staff in all of our areas.”

“It’s time we put a stop to it,” she said. “Sparrow’s [contract] proposal suggests a Band-Aid when we need a tourniquet.”

“As of today, 2,200 of you are working without a contract after having worked through a global pandemic, putting your own health at risk daily, and your family’s health at risk, to serve your patients,” state Sen. Curtis Hertel (D-East Lansing) said. “You’ve been working extra hours with fewer staff and facing the politicization of the public health crisis; you’ve been physically, mentally and emotionally worn down. And for all of that we certainly say thanks, a thank you to all of our health care heroes.

“But that message, while appreciated, falls a little short when 2,200 of you are working without a contract,” Hertel continued. “ … Health care workers should be thanked, but they should be thanked by guaranteeing their safety and their patients’ safety is prioritized every single day.”

Like numerous speakers said throughout Wednesday’s event, Hertel emphasized there is not a nursing shortage but rather a dearth of well-paid positions for health care staff working in an ongoing pandemic.

We are short-staffed. You see nurses at the end of their shifts parking their cars and just crying. It’s just not OK.

“You hear all about nurse shortages,” Hertel said. “We don’t have a shortage of skilled health professionals who are passionate about the work they do. Instead, we have workers who are not willing to continue to do more while getting less in return every single day.”

State Rep. Sarah Anthony (D-Lansing) and Ron Bieber, president of the Michigan AFL-CIO, noted that Sparrow’s informational picket comes at a time when workers across the state and country are calling for better conditions, including Kellogg workers in Battle Creek and McDonald’s staff in Detroit. The AFL-CIO is the state federation of labor that represents about one million active and retired members of 59 unions in Michigan,

“I am the proud product of two [United Auto Workers] parents, and they taught me that unions matter; solidarity matters,” Anthony said. “If you are awake in 2021, you know this is a workers’ revolution right now. Every corner of the state is on fire.”

Bieber, who read a statement of support for Sparrow staff from U.S. Rep. Elissa Slotkin (D-Holly) during Wednesday’s event, said, “it’s time for these greedy, rotten rich executives at Sparrow” to support workers.