At first glance, the holiday decorations that have emerged in downtown Muskegon Heights are familiar fare: paintings of Santa and snowmen, Charlie Brown characters and a tree laden with candy canes and red bows adorn shop windows.

For residents of the West Michigan city, however, these decorations are more than a typical holiday celebration: They are symbols of hope in a downtown where empty storefronts tell a story of years of disinvestment and disenfranchisement — and a reminder that, even in the darkest of times, there are those who will bring color to our world.

“There are so many abandoned storefronts in downtown Muskegon Heights,” former Muskegon Heights mayor Kimberley Sims said. “[We were] trying to figure out what we could do to make it better.”

Sims, who’s also a local business owner, is referring to her recent efforts to brighten many otherwise dark and empty storefronts in the city of about 10,000 people, a place situated between the city of Muskegon and Norton Shores. Together with local artists and event planners, Sims coordinated a community-wide effort to create holiday displays throughout downtown Muskegon Heights. Currently including six individual storefronts, each with their own unique theme, the effort grew so quickly and with such enthusiasm that community members are already looking forward to and planning displays for the coming years.

“I think it gives hope,” Sims said. “It brings festivity to an area that has been dark for so long. The city did their part, and they worked really hard to get the lights on downtown. … This was just an opportunity for us then to add something on top of that.”

The city of Muskegon Heights recently partnered with the nonprofit Taking Back Muskegon Inc. for its “Let’s Glitter and Shine Muskegon Heights” initiative, which coordinated decorating downtown for the holidays.

Recents efforts like these aim to reduce blight in an historic downtown area where buildings have suffered the consequences of dwindling population and lack of economic investment over the years. Sims sees the “Glitter and Shine” effort as a “catalyst for the turnaround for the community.”

In an attempt to revitalize the small city, officials in 2020 also launched a blight reduction program that encouraged residents to keep their property clean of debris and abandoned vehicles. Those who complied were sometimes surprised with monetary rewards and those who did not faced fines.

The city also recently launched Reaching NEW Muskegon Heights, a program designed to develop a new strategy and vision for downtown by seeking community input. The program’s website describes it as a “process to create a unified community vision for downtown Muskegon Heights that outlines reinvestment priorities, project designs, costs and implementation strategies” that will help the city “showcase its downtown vision to potential funders, such as foundations, agencies, and businesses, to collaborate and invest in future projects and developments.”

The program is a collaboration between Greater Muskegon Economic Development, SmithGroup, &Access, the Community Foundation for Muskegon County and the Michigan Economic Development Corporation’s Redevelopment Ready Communities Program. These formalized efforts coordinated by the city are helping to “bring some life back downtown,” said Sims.

Sims, a lifelong resident, is also personally invested in the business community. She owns Mahali — which means “place” in Swahili — a gathering place for community members to host small events and classes. A place for anyone and everyone to “come to build, to build true community,” Mahali has hosted everything from office gatherings to hip hop, step and yoga classes.

“Whatever activity could benefit the community … we tend to try to make space for it,” said Sims.

“Every year I try to decorate my window just to try to bring some life,” Sims said. But she felt like her individual efforts were not enough to revitalize a downtown poised for growth, but still struggling to shine. “This year, I felt like it was time for more of us to do it,” she said, so “I just asked.”

Sims started by collaborating with local artist Joey Williams, who had personally approached Sims about decorating her storefront window three years ago. A 25-year veteran of the Muskegon Police Department who retired in 2019, Williams has long felt a strong connection to the holiday season.

“I’ve always been a Christmas fanatic but a lot of people didn’t know that,” he said. Because his mother’s birthday is Christmas Eve, he sees the season as an opportunity to celebrate her, as well. 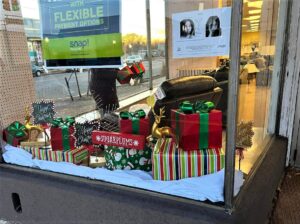 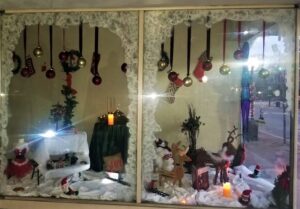 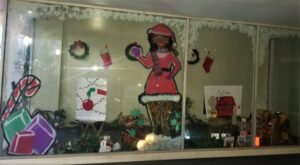 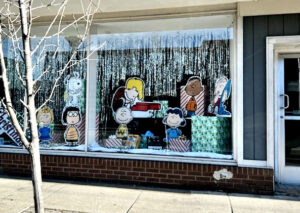 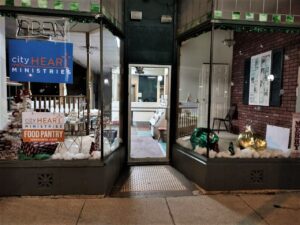 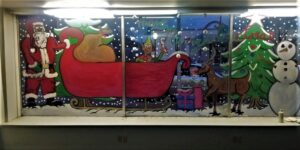 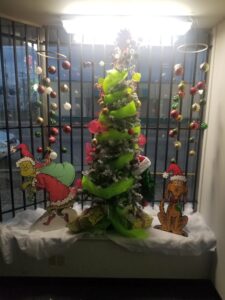 In addition to working full-time as a police officer and coaching local football teams, Williams maintained a passion for artwork from a young age.

“I’ve been doing art all my life,” he said, adding that he’s dabbled in everything from airbrush to oils and acrylics on canvas. “… I’m somewhat an artist.”

Throughout his life, Williams has created designs for T-shirts, motorcycle helmets, cars and more, but now his focus is canvas. These varied skills informed this year’s creation in Sim’s window, an ode to “A Charlie Brown Christmas,” complete with several characters and its very own sad but beautiful Christmas tree.

“It all worked out pretty good,” Williams said of his display.

Both Williams and Jojo Marryweather, another local artist, donated their time to decorate downtown Muskegon Heights.

Marryweather painted a Santa Claus display directly onto the glass of a storefront’s windows.

“I love the community,” said Marryweather, who views donating his time and artwork as “the least I could do” for the people of Muskegon Heights.

Marryweather sees the window display effort as an opportunity to inject positivity into a city that he loves. “If there’s anywhere I can pick up my neighborhood’s ego or boost their pride up, I’ll do it,” he said.

In addition to the aesthetic beauty of the window displays, Sims said they have inspired community members to organize their own events. One woman recently approached her to request the use of her building to host a “Charlie Brown Christmas” movie night for local children in the community.

“This is the type of synergy it’s creating and we’re excited about it,” she said.

Sims hopes to grow the effort beyond this year’s six participating storefronts.

“There’s this energy around doing this and people want to do more,” she said, adding that many community members have expressed that, “this is just the start” and “we can’t wait for next year.”

Lauren Fay Carlson is a freelance writer and editor. She is the former Managing Editor for Rapid Growth Media and has written for GR Magazine, Michigan BLUE Magazine and more.