What colonial governments spent centuries trying to erase, Indigenous peoples in North America are breathing life back into — even if that means traveling hundreds of miles and across borders to revitalize what was almost lost.

Crucial to that growing revitalization is Anishinaabemowin, the language spoken by Anishinaabe people in Michigan, other U.S. border states and much of Canada.

“It’s a dying language,” said Maryann Endanawas, a teacher of Anishinaabemowin since 1982 and a citizen of the Sheshegwaning First Nation in Ontario.

The Great Lakes-centric Native tongue had been actively suppressed by both federal governments for many years, as Indigenous children at so-called Indian residential schools — three of which operated in Michigan — were often punished for speaking their language and not assimilating with their white peers.

A fluent speaker and project instructor at the Little Traverse Bay Bands of Odawa Indians’ (LTBB) Gijigowi language department, Endanawas narrowly escaped the residential school experience that her older siblings endured. She traveled from Manitoulin Island to Harbor Springs two decades ago to help teach in northern Michigan and hasn’t left since.

“In my heart, I believe that native Anishinaabe people need that language to survive. You need to make your connection to the universe, to Mother Earth,” she said. “It is the language that, when you are taught at a young age, your connection is a lot clearer with Creator when you have that and you have knowledge of your culture.”

In my heart, I believe that native Anishinaabe people need that language to survive.

Like Endanawas, many Anishinaabemowin teachers in Michigan and elsewhere have come down from Canada. As Sault Ste. Marie Tribe of Chippewa Indians citizen Nathan Wright explains, many of the Indigenous families in Northern Michigan who resisted sending their children to residential schools fled north instead — escaping forced assimilation, but also taking their cultural knowledge with them across the Canadian border.

Reclaiming those traditions in Michigan and elsewhere is crucial in keeping the Anishinaabe way of life alive, Wright said. He has seen a noticeable effort by Indigenous knowledge keepers in the last few decades to ensure that survival, while Endanawas has noticed in recent years that more of the younger generation are eager to learn about their culture.

“I can see a big change in our young people, wanting to learn their language, especially, and their culture,” Endanawas said, “because both of them go together. You can’t have just culture and no language. You’ve got to know some of your language in order to understand your culture.”

In forests across northern Michigan and the Upper Peninsula — within the 1836 Treaty of Washington ceded territory, he notes — Wright wild forages herbal medicines and uses those sustainably harvested ingredients to create products for his business, Herbal Lodge.

He also educates others about plants and their uses, either by showing tribal members in person or sharing videos on social media. Wright said every person should know at least 100 plants and what their uses are.

“I just immerse myself,” Wright said. “Herbalism is something that I’m very strong with, and being out there in the woods a lot carries over to other parts of our culture naturally.” 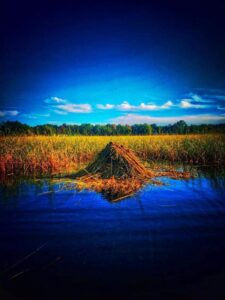 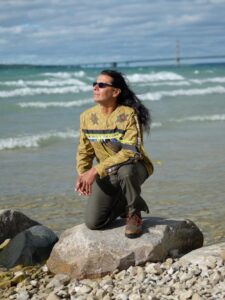 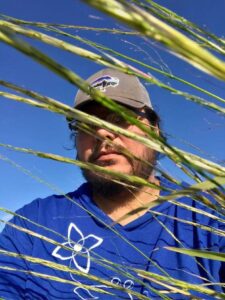 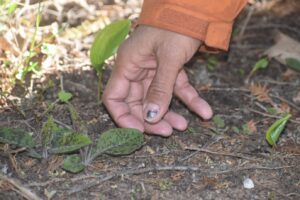 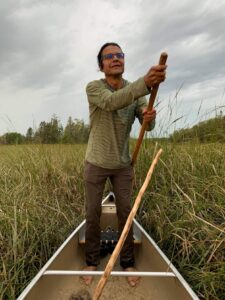 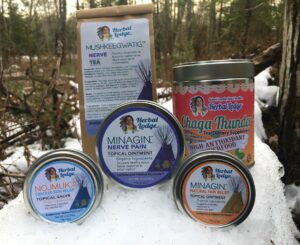 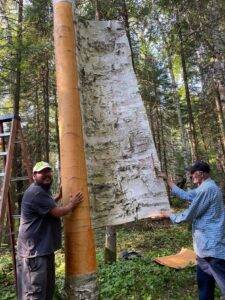 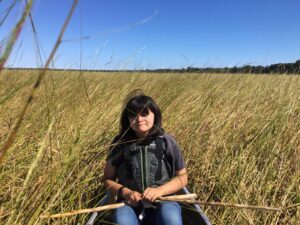 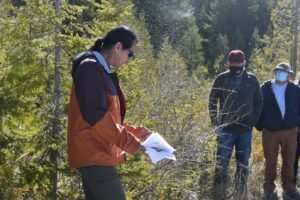 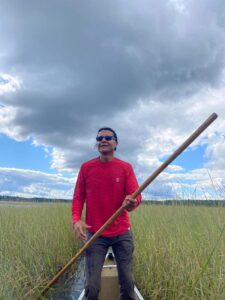 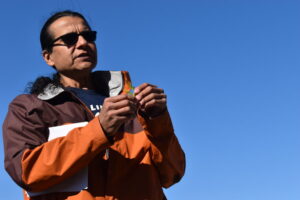 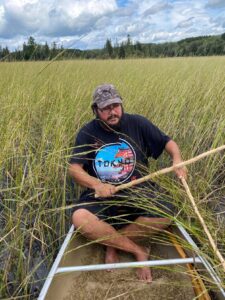 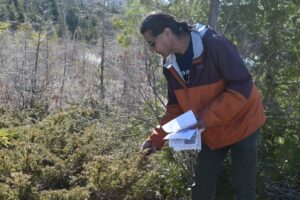 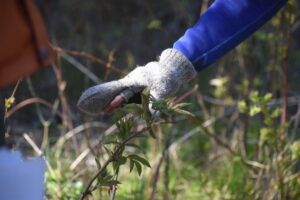 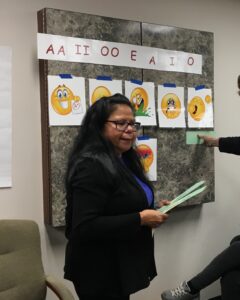 He also takes pride in exercising his treaty rights to fish, hunt and make birchbark baskets and birchbark canoes alongside wild foraging. Wright views treaty rights more as treaty responsibilities, with lived knowledge revitalizing the culture by sharing it with others.

“It’s almost like an awakening of who you truly are and where you’re truly from. Knowing that gives you a lot of strength in this world to deal with modern things.”

LTBB citizen Daniel Hinmon knows this feeling well. Not only is he the treaty rights enhancement specialist for his tribe, teaching citizens to know their treaty rights and practice them, but Hinmon also specializes in the intrinsically Anishinaabe practice of harvesting and restoring manoomin (wild rice) beds across Michigan.

“It’s part of our migration story: ‘Go to where the food grows on water,’” Hinmon says, quoting the Anishinaabe seven fires prophecy. “So we came here and that’s what we found, manoomin. It’s what kept us alive through the winters.”

Manoomin is a dietary staple of the Anishinaabek and an important part of their spiritual and cultural identity. Since pollution, dams and nonnative species have damaged and destroyed many wild rice beds following the arrival of settlers to the Great Lakes region, tribal citizens like Hinmon have made it their mission to do their part and help restore the crucial, life-giving food.

“It’s really important,” Hinmon said. “I like to find places where it grows and monitor them and throw some more seeds around and see if we can expand the beds, and help restart the ecosystem to what it once was.”

In Minnesota, tribes are also working to preserve their wild rice beds as they fight back against Line 3, an ongoing project by Canadian pipeline company Enbridge, which is set to transport crude oil through many treaty territories and threatens to harm delicate manoomin beds.

Enbridge also operates the Line 5 pipeline under the Straits of Mackinac, which all 12 federally-recognized tribes in Michigan oppose and view as an existential threat to long-held treaty rights.

It’s almost like an awakening of who you truly are and where you’re truly from.

“I think manoomin is a keystone species. And once you’ve got that in an environment, you see animals and plants and everything [around it] just thriving. It’s just beautiful. I think that’s what it was once like everywhere.”

Endanawas said she is happy to see people in Michigan practicing and sharing their own cultural teachings, from foraging and working with manoomin to traditional basket weaving.

“There’s a lady here [in Harbor Springs] who’s a weaver and she teaches other people in this community to weave, and that’s something they had done many, many years ago. And it’s still alive here today,” Endanawas said. “So that culture is here and is alive.”

To preserve, revitalize and share traditional Anishinaabe ways is to also embody the teachings of Endanawas’ grandmother, who taught her as a child to take advantage of every opportunity to share her cultural knowledge.

“Go out there and give back to the people who want to know, because they do need it,” Endanawas said.

“And when you give that away to other people, then you’re making room for more to come in.”

Here's the full text of Biden’s State of the Union address by Michigan Advance March 2, 2022
Rick Haglund: Threats to Michigan's auto industry aren’t… by Rick Haglund May 6, 2022
Indigenous Siberians, barred from fighting fossil fuels back… by Laina G. Stebbins May 14, 2022