Standing by ancient rocks that have fallen from space to Earth, Shannon Schmoll, the director of the Abrams Planetarium at Michigan State University in East Lansing, gushed with enthusiasm when talking about the new exhibit, “Asteroids, Meteors and Meteorites Oh MI.”

“A lot of people love astronomy and space, but we don’t have a lot of tangible items, unlike history or biology,” Schmoll said. “These meteorites are tangible things people can see and connect to. It’s really, really cool.”

The “Asteroids, Meteors and Meteorites Oh MI” exhibit is located inside the Von Del Chamberlain Meteorite Gallery at Michigan State University’s Abrams Planetarium, 755 Science Rd. in East Lansing. It is free to view and available any time the planetarium is open from 9 a.m. to 4:30 p.m., Monday through Friday. For more information, click
here.

The permanent exhibit, which debuted earlier this month, showcases meteorites that have landed around the world, from Michigan to Russia. Hailing from inside the solar system, meteorites are typically fragments of asteroids that broke apart long ago in what’s known as the “asteroid belt” between Mars and Jupiter. These fragments then orbit the sun for long periods of time — often millions of years — before they collide with Earth. Scientists have long relied on meteorites for information about the solar system’s history, and they help the public understand the beginning of the solar system and how planets have formed.

“Meteorites are the fossils of the solar system in a way,” said Schmoll, a black holes expert who has been the Abrams Planetarium director since 2014. “They’re the literal building blocks from which the solar system was built.”

As part of the exhibit, visitors can touch pieces of the moon and Mars that have ended up on Earth and view meteorites that have landed throughout Michigan, including in Grand Rapids, Hamburg, Iron City, Allegan, Seneca Township, and elsewhere, Schmoll explained. There are also interactive learning opportunities for people to connect with space in a way that the planetarium director said she hopes makes them feel more intertwined with our solar system.

“I think what makes them so fascinating is they’re these things from space, something that’s inaccessible to so many people,” Schmoll said. “So, to have something that’s from another part of the solar system fall onto Earth — that’s the closest to space a lot of people will ever get. That alone is really cool.”

Funded by a nearly $100,000 grant from the Institute of Museum and Library Sciences and a $15,000 grant from the Dart Foundation, the exhibit’s meteorites are part of a longtime planetarium collection that has not been viewed by the public for decades. 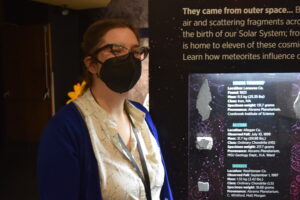 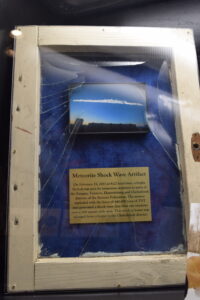 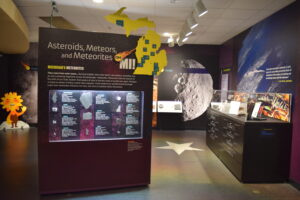 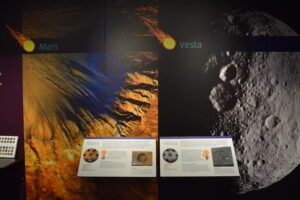 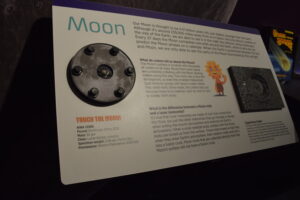 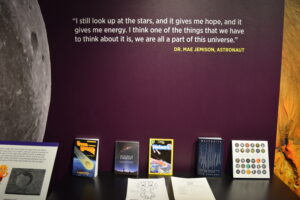 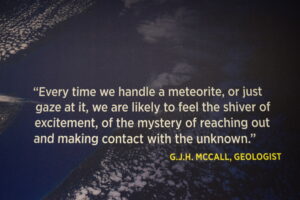 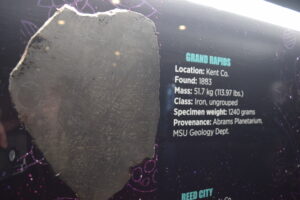 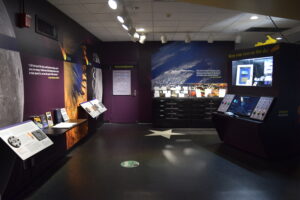 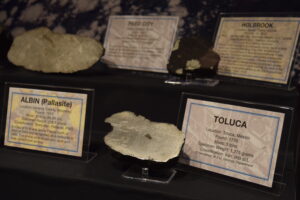 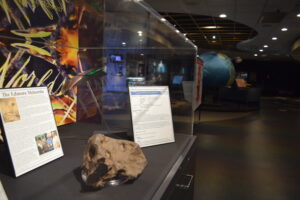 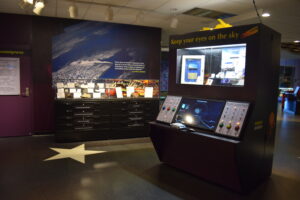 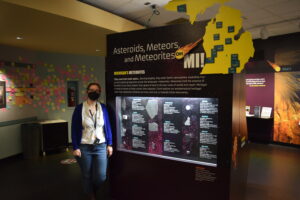 “We’ve had a meteorite collection since the late 60s,” Schmoll said. “We had meteorites on display in our lobby more or less since the beginning of the planetarium. About 27 years ago, they were taken off display and put away. When I started this job and someone said we have a meteorite collection, I was like, ‘Wow, that’s really exciting.’”

Now that the exhibit is open to the public, Schmoll hopes it “sparks an interest in science” among children — and everyone.

“In astronomy education, there’s the hope we realize we’re all on this planet together, and we’re one world in a much bigger universe,” she said. “There’s the hope that if we can recognize that, maybe we can get to a point where we can all work together.”