The state’s independent redistricting commission approved the final congressional and state maps last week, but some voting rights activists — including a group of Democratic lawmakers who are filing a lawsuit — say the new maps unconstitutionally disenfranchise Black voters.

The Michigan Independent Citizens Redistricting Commission (MICRC), a 13-member commission consisting of four Republicans, four Democrats and five independents, approved Tuesday final maps for the state House, state Senate and U.S. House. This is the first time that Michigan has had an independent redistricting process, which voters approved in 2018.

“There should be partisan fairness without watering down Black votes. And sometimes I think, well, is this deliberate? Are you trying to take us back 30, 40 years? It’s the fight that we’ve had over and over and over again, and we’re really tired,” said state Rep. Tenisha Yancey (D-Harper Woods), one of the lawmakers filing a lawsuit against the MICRC.

Yancey said she believes she wouldn’t have been able to win in her district if it weren’t for support from voters in Detroit.

“I’m term limited. So I’m not fighting for my seat. I’m fighting for whoever comes behind me in my seat,” she said.

Under the Constitution, the Michigan Supreme Court handles all litigation concerning the MICRC, instead of cases going through lower courts first.

MICRC spokesperson Edward Woods said the commission learned about the lawsuit through media reports and inquiries, adding has not yet been served.

Micheal Davis, a spokesperson with the voting rights group Promote the Vote, said the maps the commission voted on Tuesday “simply are not good enough.”

“Michigan voters deserve better, like the maps Promote the Vote provided to the commission that protected the rights of African American voters without packing them in districts, ensured partisan fairness, and complied with all of the redistricting criteria better than any of the maps adopted,” Davis said.

The commission followed the guidance of its legal counsel, voting rights attorney Bruce Adelson and partisan fairness expert Lisa Handley, who stated that the commission would still comply with the VRA even without majority-Black districts.

Others said that wasn’t sound advice.

John E. Johnson Jr., executive director of the Michigan Department of Civil Rights, said in a statement that the new maps “will dilute minority voting strength.”

“It is deeply concerning that a public body in 2021, despite overwhelming input from experts, academics and the citizens who will be directly impacted by their decisions, endorsed maps that do not meet this vital legal and ethical test,” Johnson said. “The Commission will review this outcome and consider what next steps it will take.”

Johnson submitted an analysis in October outlining how the commission was violating the VRA.

Bob Allison, deputy director of the Michigan League of Conservation Voters said there were “serious errors in a racially-polarized voting analysis” that raises concern about the “poor performance of consultants and the compressed timeline that resulted due to the U.S. Census delays.”

Complying with the VRA was the topic of discussion during a closed MICRC session in October. After a group of media groups filed a successful lawsuit against the commission for a lack of transparency and unconstitutionally meeting behind closed doors, the audio recording and memos from that meeting were released. 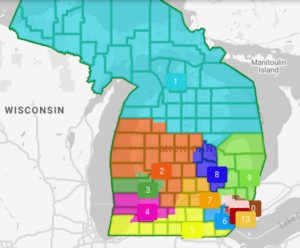 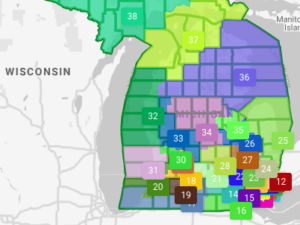 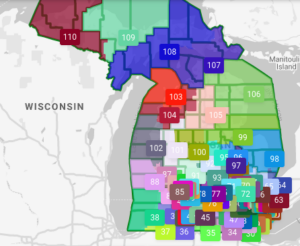 Some leaders applauded the commission for making history.

Before voters in 2018 to create the MICRC, the Legislature was charged with drawing the maps that would then require the governor’s approval.

“Our democracy is stronger thanks to Michigan citizens’ engagement, leadership and vision for a fair, inclusive and transparent process that puts voters above politics and ends gerrymandering in Michigan once and for all,” said Secretary of State Jocelyn Benson, a Democrat.

Eric H. Holder, Jr., a former U.S. attorney general under President Obama and chair of the National Democratic Redistricting Committee, applauded the work of the MICRC, saying “no one gets everything they want, and everyone has to compromise.”

“But that is how a commission is supposed to work and, in turn, it is a reflection of how American democracy should function,” Holder said.

These maps are biased. You don't need to go any further than the Commission's own data.

“These maps are biased. You don’t need to go any further than the Commission’s own data,” Brewer said. “There have been so many procedural missteps along the way that got them to where they were last week. They started drawing maps last summer without any partisan data and without any VRA analysis. And so they drew maps for weeks blindly, without knowing what the VRA or partisan implications would be. And then they discovered in October that they basically have gerrymandered the state again.”

The Michigan Republican Party may also be considering litigation against the commission, as spokesperson Gustavo Portela said the party is “evaluating all options to take steps necessary to defend the voices silenced by this commission.”

The new maps will go into effect for the 2022 election and will be in place for 10 years.