Here are the worst Michigan takes on the Jan. 6 insurrection anniversary

Alongside posts reflecting on the one-year anniversary of the violent pro-Trump insurrection at the U.S. Capitol and what it has meant for democracy, a litany of right-wing takes Thursday continued to prop up conspiracies about both the 2020 election and the ongoing COVID-19 pandemic.

On a recent appearance on MSNBC’s “Meet the Press,” U.S. Rep. Peter Meijer (R-Grand Rapids) — who voted to impeach Trump over the insurrection last year and talked extensively about threats he faced — struck a different tone on Thursday. Meijer told host Chuck Todd that the Jan. 6 insurrectionists stormed the U.S. Capitol because they suffered from “riot envy” after seeing Black Lives Matter protests in summer 2020.

Those BLM demonstrations, which protested against police brutality and racism after multiple police-involved killings of unarmed Black citizens, were overwhelmingly peaceful. The insurrection left five people dead, hundreds of police officers injured and serious damage to the U.S. Capitol building.

In a now-unshared post on the Muskegon County Republican Party’s Facebook page, the words “the real president” is pasted atop a picture of former President Donald Trump, with the caption, “January 6th never forget.”

The page then promotes an event for a Jan. 6 vigil, “in honor of the hundreds of Americans who have been targeted for political and religious prosecution [sic] as a result of exercising their First Amendment rights at the US Capitol.”

“Today, instead of holding those that committed criminal acts accountable & to heal a divided nation, we will hear non-stop coverage about a ‘politically motivated’ riot from the [President Joe] Biden team. As much as we found the criminal behavior abhorrent, flaming the fires of discontent with a false political motive is also abhorrent.”

The post goes on to question why there was no similar outrage during BLM protests and when GOP offices were vandalized.

The Hillsdale County Republican Party is slated to host an “insurrection anniversary” event Thursday evening at a Hillsdale church. The event is scheduled as a fundraiser with a $10 admission fee. 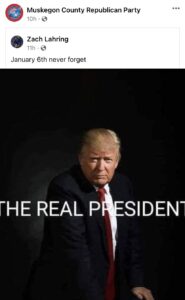 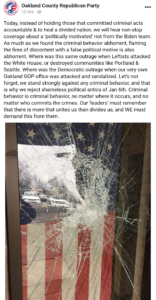 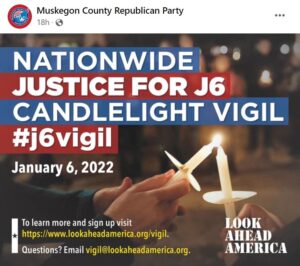 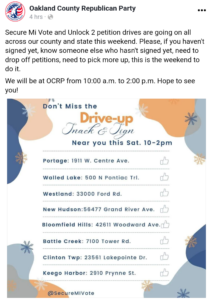 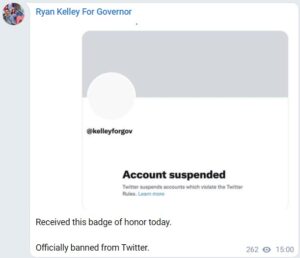 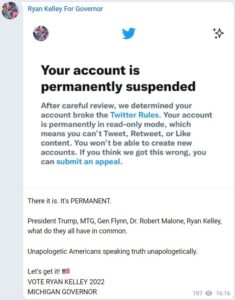 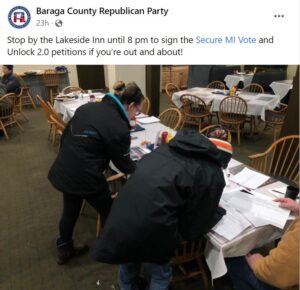 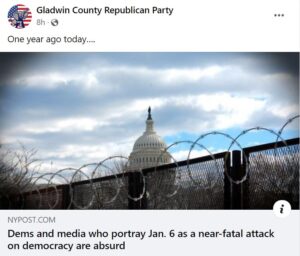 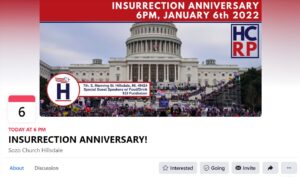 A column from conservative Detroit News editorial page Editor Nolan Finley also denies that the riot was ever an “insurrection” or “presented a credible threat to our democracy.”

Finley argues that any position to the contrary is merely meant to stir distrust of Republicans ahead of the 2022 elections, despite political experts and historians saying otherwise and raising red flags about the ripple effects of Jan. 6 on voting rights, local elections, trust in the democratic process and more.

Ryan Kelley, an Allendale Township planning commissioner and real estate agent running as a Republican in the 2022 gubernatorial race, reportedly used his Twitter account Thursday and the days before to prop up misinformation about COVID-19. On Thursday afternoon, his account was suspended.

“Received this badge of honor today,” Kelley posted to Facebook and Telegram.

About an hour and a half later, Kelley announced that his account has been permanently suspended for breaking the Twitter rules. The account is in permanent read-only mode and he will not be able to make new accounts.

Here are the worst Michigan takes on the Jan. 6 insurrection anniversary