Will false Trump electors’ attempt to hijack the Michigan vote be punished?

Donald Trump Supporters march around the Michigan State Capitol Building to protest the certification of Joe Biden as the next president of the United States on January 6, 2021 in Lansing, Michigan. Trump supporters gathered at state capitals across the country to protest today’s ratification of President-elect Joe Biden’s Electoral College victory over President Trump in the 2020 election. | Matthew Hatcher/Getty Images

During a Thursday appearance on MSNBC’s “The Rachel Maddow Show,” the Democrat said her office had referred the case to the U.S. attorney’s office for the Western District of Michigan, adding she believes that “this is a matter best investigated and potentially prosecuted by the feds.”

“Of course, there’s no double jeopardy if you were to bring both state and federal charges for the same offenses,” Nessel said. “But obviously this is part of a much bigger conspiracy. And our hope is that the federal authorities and the department of justice and the United States attorney general, Merrick Garland, will take this in coordination with all the other information they received and make an evaluation as to what charges these individuals might face.”

The phony document claiming former President Donald Trump won Michigan’s 16 electoral votes, was submitted to Congress in December 2020 and was obtained by American Oversight, a Washington, D.C-.based watchdog, as the Advance previously reported. The fraudulent certificates, which were filed by Republicans for Trump, were uncovered by American Oversight through a Freedom of Information Act request.

However, President Joe Biden won Michigan by 154,000 votes and thus all 16 electoral votes.

The Select Committee to Investigate the January 6th attack on the United States Capitol also is reportedly probing the issue.

The Michigan Republican Party slammed Nessel’s comments on what it termed “a left-wing cable news show.”

“This is nothing more than political prosecution of convenience led by Dana Nessel,” spokesperson Gustavo Portela said in a statement. “Dana Nessel is playing political games with people’s lives and livelihoods for the sake of scoring political points ahead of an election.”

Michigan’s legal set of Democratic electors met inside the Michigan Capitol on Dec. 14, 2020, to cast their votes. The 16 electors all voted for Biden and Vice President Kamala Harris.

The fake certificate included 16 signatures from Michigan Republicans, including Michigan RNC National Committeewoman Kathy Berden, who served as chair and submitted the document to officials.

Other GOP officials who signed the fake document were: Michigan GOP Co-Chair Meshawn Maddock; Amy Facchinello, a Grand Blanc school board member whose QAnon social media posts have come under fire; and Stan Grot, the Shelby Township clerk at the center of a payoff scandal at the Michigan GOP alleged by former Chair Laura Cox.

There were identical fraudulent certificates signed in six other states: Arizona, Georgia, New Mexico, Nevada, Pennsylvania and Wisconsin. None of the seven certificates obtained specified that the signatories were an illegitimate slate of electors who were not chosen by the states’ voters.

“Looking at the certificates, there were striking similarities in the language and the formatting between many of them that … points to this not being an original idea,” says Clark Pettig, spokesperson for American Oversight. “These certificates matter because they show in black and white just how far allies of the former president were prepared to go to subvert our democracy. It’s shocking to see it there on the page.”

A memo from Trump lawyer John Eastman published by the Washington Post last year outlines a six-step plan to get former Vice President Mike Pence to discard the 2020 elections results in those seven states during the Jan. 6 Electoral College vote count in Congress and install Trump for another presidential term:

“When [Pence] gets to Arizona, he announces that he has multiple slates of electors, and so is going to defer decision on that until finishing the other States,” wrote Eastman. “At the end, he announces that because of the ongoing disputes in the 7 States, there are no electors that can be deemed validly appointed in those States. That means the total number of “electors appointed” —the language of the 12th Amendment—s 454…. A “majority of the electors appointed” would therefore be 228. There are at this point 232 votes for Trump, 222 votes for Biden. Pence then gavels President Trump as re-elected.”

Two of the seven states included caveats. In New Mexico, the wording was slightly altered to be less brazen stating that the documents were being submitted, “on the understanding that it might later be determined that we are the duly elected and qualified Electors…” Pennsylvania Republicans used similarly contingent language.

In Michigan and four other states, the signatures appeared on the document declaring, “We the undersigned, being the duly elected and qualified Electors for President and Vice President of the United States of America from the State of Michigan, do hereby certify the following …” 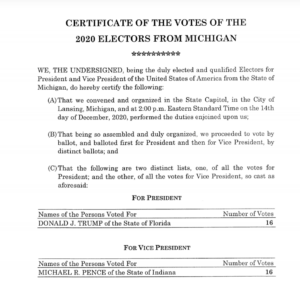 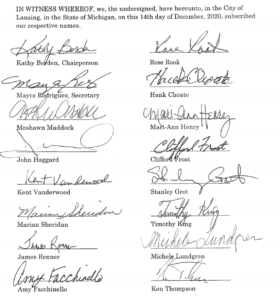 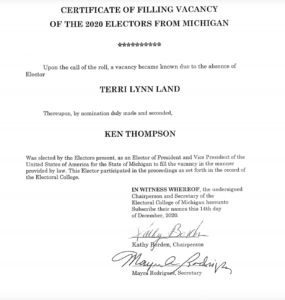 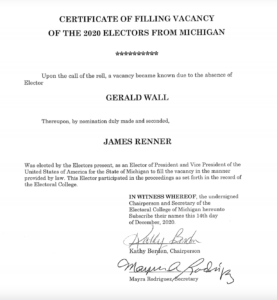 The Michigan document also falsely proclaimed that the fake slate of electors “convened and organized in the State Capitol, in the City of Lansing, Michigan” and “performed the duties enjoined upon” them.

State Rep. Gary Eisen (R-St. Clair Twp.) did not attend after comments he made to a radio station earlier that day on false allegations of voter fraud. When asked if he could guarantee it would be a “safe day in Lansing, nobody’s going to get hurt,” Eisen said, “No. I don’t know because what we’re doing today is uncharted. It hasn’t been done.” Nessel called the remarks “open sedition.” Eisen was later stripped of his House committees for the last week of session.

Some activists unsuccessfully tried to enter the building, but were stopped by police. Republicans also tried to illegally submit a sham slate of pro-Trump electors to Capitol police that day.

Pettig says the “phony electors” need to be viewed as one part of a broader attempt to subvert or overturn elections. Other efforts he cites include bogus “audits” — for which Republicans like attorney general candidate Matt DePerno have called — as well as partisan investigations and planting broad distrust in election results.

“I think what we are seeing here on multiple levels, on multiple fronts is a broad effort by the former president and his allies to overturn the election by whatever means possible,” Pettig said.

As for federal charges, Nessel said she believes these offenses could be charged under “forgery of a public record, for the purposes of defrauding the United States or conspiracy to commit an offense to defraud the United States.”

DePerno, who hopes to run against Nessel this year, blasted Nessel in a tweet last week soliciting campaign contributions with a graphic that featured her in prison: “When we called her out for her corruption, she immediately ran to the fake news for a pity party! The Left may fall for it, but we won’t! Donate $5, $10, $25, or $50 NOW to LOCK HER UP!”

Nessel responded: “Again…totally normal way for an AG candidate to campaign against an opponent. Soliciting campaign contributions in an exchange for a promise to imprison his political adversaries. Also, someone has a very unrealistic view of how tall I am.”

Again…totally normal way for an AG candidate to campaign against an opponent. Soliciting campaign contributions in an exchange for a promise to imprison his political adversaries.
Also, someone has a very unrealistic view of how tall I am. https://t.co/fhdR4wQDwX

Benson, a Democrat who was asked questions on Nov. 30 by the House committee about events prior to the insurrection, also appeared on the show alongside Nessel.

She said prior to the 2020 election, the state “had seen a great deal of respect and deference to our voters” but that was “upended in the chaos and confusion that we saw in the post-2020 election process.”

“We not only need to see accountability and justice in this matter for those who broke the law, but we need to work to put protections in place to ensure we do not see a repeat of these nefarious attacks and tactics in future elections,” Benson added.

There may also be action in other states.

A complaint against 10 Republicans in Wisconsin who posed as official electors, signing and submitting falsified certification papers to Congress is in front of the Wisconsin Elections Commission and Milwaukee County District Attorney John Chisholm, filed by Law Forward attorneys Jeff Mandell and Mel Barnes.

They filed the complaint nearly a year ago and so far there have been no charges, penalties or findings on the actions, which could potentially constitute a felony.

With Nessel asking the federal Justice Department to step in, Wisconsin’s Democratic attorney general appeared open to a similar path.

Asked if he would consider such an action, Attorney General Josh Kaul responded, “I believe it’s critical that the federal government fully investigates and prosecutes any unlawful actions in furtherance of any seditious conspiracy.”

Some reporting first ran in the Advance’s sister outlet, the Wisconsin Examiner. Read the story here.

Will false Trump electors’ attempt to hijack the Michigan vote be punished?

Melanie Conklin is proud to be a native of the state of Wisconsin, which gave humankind the typewriter, progressivism and deep-fried cheese curds. Her several decades in journalism include political beats and columns at Isthmus newspaper, the Wisconsin State Journal and other publications. When not an ink-stained wretch, she served time inside state, local and federal government in communications. She is excited to be back at the craft of journalism as Deputy Editor of the Wisconsin Examiner. It’s what she’s loved ever since getting her master’s degree in journalism from the UW-Madison. Her family includes one husband, two kids, four dogs and five (or more) chinchillas.