Republican gubernatorial candidate Perry Johnson declined to rule out banning abortions for survivors of sexual assault during an event Wednesday to officially launch his campaign to be the Republican nominee for governor in 2022.

“I will tell you this: Two wrongs don’t make a right. I am pro-life,” Johnson told reporters Wednesday.

Johnson, who is one of 13 Republicans vying to oust Democratic Gov. Gretchen Whitmer, has the same stance on abortion as some of his rivals, including former Detroit Police Chief James Craig and chiropractor Garrett Soldano, who said last month that rape victims who become pregnant must “protect that DNA and allow it to happen.”

Asked whether he believes the 2020 presidential election was stolen from former President Donald Trump — which it wasn’t; President Joe Biden won the Electoral College 306-232 and Michigan by more than 154,000 votes — Johnson used Trump’s misinformation about the election as justification for why he would support voter ID mandates.

“I’m going to campaign on quality, because I believe it’s very important that we have voter integrity in every possible way. The very matter of fact that we have to talk about this means we have issues that we need to resolve,” Johnson said. “In this state I’m going to have voter ID – voter ID will be mandatory. It means that we’re going to make it so that everyone can have a voter ID. I’m not going to do anything to suppress votes; I will go out of my way to make voter ID the easiest thing in the world to possibly achieve.”

Johnson, a businessman and self-described “quality guru,” announced his campaign the day after Whitmer’s fourth State of the State and aired an ad during the Super Bowl.

If elected, Johnson said he would donate his salary, something GOP former Gov. Rick Snyder said, as well. Snyder also dropped a Super Bowl ad to kick off his 2010 gubernatorial campaign and they share the same Republican consultant, John Yob, who was at Wednesday’s event.

Former U.S. Ambassador to the Netherlands Pete Hoekstra, who unsuccessfully ran for governor in 2010, submitted a video question about education to the campaign. Hoekstra also is a former Yob client who ran a Super Bowl ad during his unsuccessful 2012 U.S. Senate bid.

“If you take a look at the background, yes, I am calling from the free state of Florida,” Hoekstra said in the video. “And I look forward to the day when Michigan again will be a free state and we will have moved out from the heavy hand of government.”

Michigan has no wide-ranging pandemic restrictions left in place.

Johnson said during his stump speech that he is “not going to go and condemn our governor because she shut our state down like everybody else.”

“I condemn the action because she did not pay attention to science – the science of statistics,” Johnson added. “What we needed to do is to recognize the basic foundation on which this country was founded: life, liberty and the pursuit of happiness. … Liberty is important to every American because it’s what separates us from the rest of the world. And by golly, if we’re going to take that liberty away, let’s pay attention to giving it back as soon as we can.”

Johnson listed a number of complaints he had with Whitmer’s pandemic restrictions, including which businesses were deemed essential and thus allowed to be open.

“It was OK to open a liquor store, because that was essential, you could be six feet away,” Johnson said. “But we couldn’t have a health studio, even though you could be 26 feet away.”

Johnson also pointed to the closure of gardening centers in retailers larger than 50,000 square feet, which was misrepresented by many right-wing figures in the early days of the pandemic as a total ban on selling gardening supplies.

Johnson brought up an auditor general report that suggested Michigan had underreported COVID-19 deaths in long-term care facilities by 2,386 people, though the cause for the discrepancy was using different definitions for the data and adding deaths from unlicensed facilities that were not required to report to the Michigan Department of Health and Human Services.

“We have a disease, we know it’s contagious, the most vulnerable part of the population is the elderly. So what decision do we make? We decide that when we have these infected people with COVID in the nursing homes, we’re going to force them back into the nursing homes, thereby infecting all those people,” Johnson said. “The auditor general just did a study. And that study said there were an additional 2,400 deaths in our nursing homes. So we actually covered up the deaths.”

Johnson also brought up Whitmer’s husband, Marc Mallory, asking a small business if being the governor’s husband would move him up the queue to get their dock and boat in the water at their second home back in 2020. That was news story that Trump often pointed to during his presidential campaign, often getting chants of “lock her up” — even after state and federal law enforcement arrested men in an alleged far-right plot to kidnap and possibly kill her over her COVID measures. 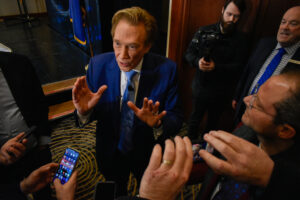 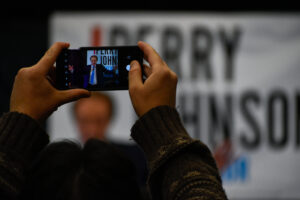 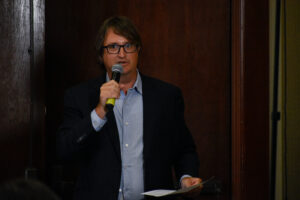 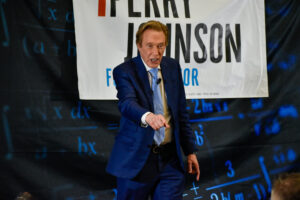 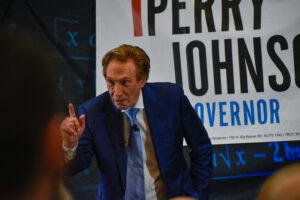 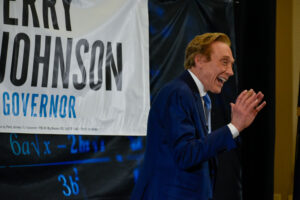 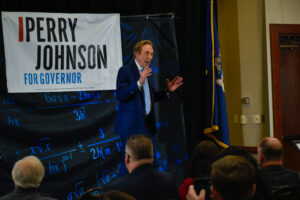 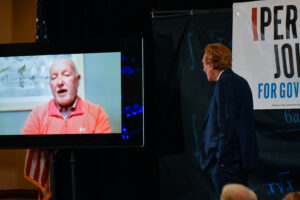 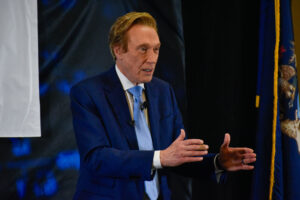 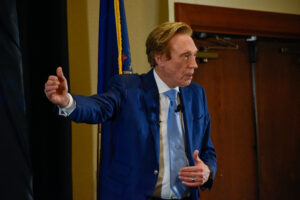 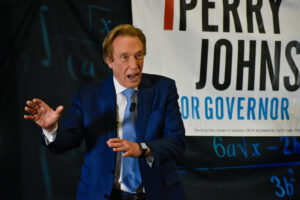 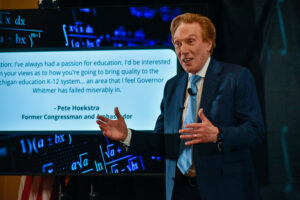 Whitmer had described the call as a “failed attempt at humor.” Michigan did not have restrictions on boating at the time, but had earlier in the pandemic, and Whitmer had encouraged Michigan residents to “think long and hard” before making trips to second homes during the early months of the pandemic.

Johnson also pointed to Whitmer violating social distancing orders at the Landshark in East Lansing after she was fully vaccinated and taking a private jet to Florida to visit her father with a severe chronic illness as examples of hypocrisy.

In 2018, Whitmer campaigned on a slogan of “fix the damn roads.”

Johnson told the audience Wednesday that the governor had failed at her main campaign promise and missed an opportunity to address them during the pandemic.

Johnson incorrectly said that “she raised the taxes on your gasoline, so when you go the pump, realize some of that goes to your buddy, Gretchen.”

Whitmer’s proposal for a 45-cent gas tax increase was shot down by members of both parties in the Legislature in 2019. However, the federal bipartisan infrastructure law signed by Biden last year will mean billions for Michigan to repair roads, bridges and water infrastructure.

Johnson has loaned at least $2.5 million to his campaign to match Whitmer’s fundraising haul in the fourth quarter of 2021.

Kevin Rinke, one of his opponents in the Republican primary who owns a car dealership, has donated $2 million and has pledged to invest up to $10 million in his campaign. He has only raised $4,938 from supporters.

Voters will select the Republican nominee for governor in Michigan’s primary Aug. 2. The winner will go on to face Whitmer in the general election Nov. 8.