Warning: This story includes the videos released by the police. Some of the footage is graphic.

The four videos released Wednesday are from the officer’s body-worn camera, an in-car camera, a home surveillance system and a cell phone recording.

“When [the Michigan State Police] completes their investigation is traditionally when videos like this would be released,” said GRPD Chief Eric Winstrom. “We felt that on balance, it was more important to be transparent with the community and to provide what information the Grand Rapids Police Department has immediately before that process is finished.

On the morning of April 4, an unnamed Grand Rapids police officer pulled Lyoya over for a traffic stop. According to the videos, Lyoya got out of the vehicle. The officer told Lyoya to get back into the car and Lyoya started to run away from the officer.

Winstrom said the officer deployed a taser twice, which he said looks like did not make contact with Lyoya. The two struggled over possession of the stun gun.

Then, as the officer held Lyoya face-down on the ground, he fatally shot Lyoya in the back of the head.

GRPD, the Michigan State Police and the Kent County Prosecutor’s office are investigating the incident.

Winstrom said he had possession of three videos of the incident early on, but did not have the phone recording. He worked with the Michigan State Police to get the footage so he could release all four videos at once.

“I wanted to release all four videos at the same time because there was a potential if I release those three videos, and then the fourth one was released in a month, that I’d be accused of being less transparent even though I did not have that video,” Winstrom said.

Following the release of the videos, hundreds of people gathered in Grand Rapids to protest, calling for the police department to be defunded, to name the office and to show support for Lyoya’s family. Lyoya’s brother, Jimmy Barwan, told the crowd that their father saw a different video than the videos the police released.

The march has started. pic.twitter.com/4yPuA6hVwt

“Our city is now added to the list of cities across the country where another African American man has died as a result of the use of lethal force with the interaction of law enforcement,” said City Manager Mark Washington. “I offer my sincere condolences to the family of Patrick Lyoya, who is grieving the death of a son, father and brother. And this is also a very difficult time for the members of our police department and the officers specifically, as they process this very regrettable event in which a life had to be taken and enforcement of the law.”

Winstrom said the department will not “draw conclusions about whether the officer involved acted consistent with the law, our policies and our training” until the investigation is complete.

When asked if Winstrom thought this incident “was good policing,” he said there are certain rules he needs to follow as far as disciplinary proceedings. 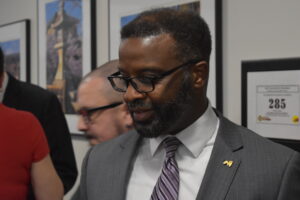 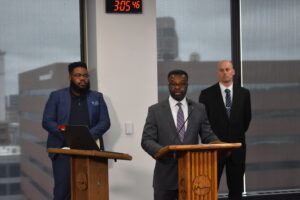 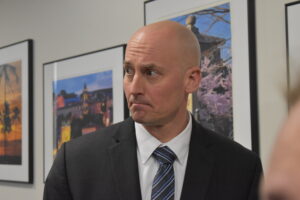 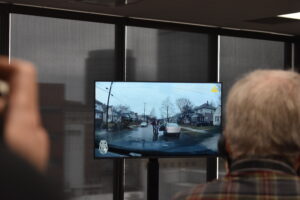 The footage from the officer’s body cam is cut short before it shows the shooting, which Winstrom speculates is because the camera was turned off during the struggle between Lyoya and the officer.

In May and June 2020, Grand Rapids and cities across the country protested after George Floyd, a 45-year-old African American man from Minneapolis, was killed by a police officer who pinned a knee on Floyd’s neck. Community members at that time called on the city to defund the GRPD and make changes to the department’s policies.

In November 2021, the city of Grand Rapids passed a resolution granting the Police Department $120,000 from the U.S. Department of Justice. The funding was for crisis intervention, de-escalation training and tolerance, diversity and anti-bias training.

Winstrom said he is unaware of when the unnamed officer received deescalation training and has not reviewed his training records.

In wake of Lyoya’s death, a reckoning with Grand Rapids’… by Anna Gustafson May 7, 2022
‘A moment that feels all too sickeningly familiar’ by Allison R. Donahue April 14, 2022
Officer will be charged in death of Patrick Lyoya, Kent… by Kyle Davidson June 9, 2022