Another Michigan Republican is fundraising off attacks on the LGBTQ+ community and supporters.

A fundraising message sent by state Sen. Tom Barrett (R-Charlotte), who is seeking the Republican nomination for the newly drawn 7th Congressional District, claims, “President Biden is forcing 5-year-olds to learn about gender reassignment surgeries, gender identities, and other radical ideas,” adding that “Every American needs to step up TODAY and stop this sick and twisted ideology from poisoning our children.”

According to a screenshot obtained by the Michigan Advance, Barrett’s original fundraising appeal came via text and appeared to be an appointment confirmation for “Your Child” to receive “Gender Reassignment Surgery Tomorrow at 9 AM.” It then asks, “If you would like to CANCEL this appointment because you do not believe in teaching young children about dangerous transgender ideologies, please sign your name NOW.”

That message has since been replaced with Barrett’s current appeal in which he also claims, “Democrats are HELLBENT on destroying our faith, removing God from the center of our nation, and pushing transgender ideology on young children. Without your immediate support, Pelosi will have all the ammunition she needs to destroy Christian Republicans like Tom Barrett & completely eviscerate our traditional values.” 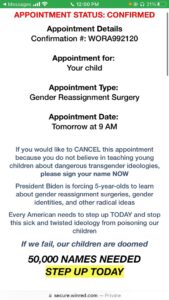 The message follows a fundraising email earlier this week from Barrett’s colleague, Sen. Lana Theis (R-Brighton), accusing three Democratic senators, including Sen. Mallory McMorrow (D-Royal Oak), of being “groomers” that “sexualize” children after they walked out of an invocation she gave in which she claimed children are “under attack” from “forces that desire things for them other than what their parents would have them see and hear and know.”

Theis appeared to be referencing Republicans’ national crackdown on teachings that reference LGBTQ+ issues and America’s history of racism.

In a floor speech response Tuesday, McMorrow said she wondered why Theis had accused her by name of grooming and sexualizing children.

“Then I realized,” said McMorrow. “I’m the biggest threat to your hollow, hateful scheme. Because you can’t claim that you’re targeting marginalized kids in the name of ‘parental rights’ if another parent is standing up and saying no.”

She concluded by saying, “hate will only win if people like me stand by and let it happen,” and that Theis could call her whatever she wanted, but “I know who I am. I know what faith and service means, and what it calls for in this moment. We will not let hate win.”

On Wednesday, McMorrow said that she is acutely aware that rhetoric like that of Theis’ fundraising email can lead to very real consequences, noting the “pizzagate” conspiracy that led to a shooter barging into a pizza shop in Washington, D.C., and preceded the far-reaching QAnon conspiracy.

Theis is facing a primary challenge this year from Mike Detmer of Howell, who was endorsed by former President Donald Trump. Detmer has criticized Theis for accepting the results of a Senate Oversight report that found no evidence of widespread fraud in the 2020 presidential election that Trump lost. In February, Detmer told supporters they should “be prepared to lock and load” at the polls.

While Barrett is considered to be the likely winner of the GOP nomination for the 7th District, he is trailing U.S. Rep. Elissa Slotkin (D-Holly) in fundraising.

Recent figures show Slotkin with a major fundraising advantage over Barrett, raising more than $1.3 million in the first quarter of 2022, with $5.5 million on hand. Barrett reported raising $465,735 with $395,910 on hand during the same period.

“Using scare tactics about our children’s well-being to raise money for a political campaign should be off-limits,” said Slotkin. “This is what people hate about politics: the politicians that only want to use fear to further divide us in a time where we should be coming together.”

Michigan Republicans backing LGBTQ+ rights say GOP's… by Laina G. Stebbins May 10, 2022
Here's the full text of Biden’s State of the Union address by Michigan Advance March 2, 2022
House Dems have a bill to make grooming a crime, but… by Allison R. Donahue June 17, 2022