Karamo, DePerno are both 2020 election deniers

Two candidates on Saturday rode endorsements from former President Donald Trump to win the majority of Michigan GOP delegates’ votes for secretary of state and attorney general at the early convention in Grand Rapids.

Both Secretary of State nominee Kristina Karamo and Attorney General nominee Matt DePerno have denied the 2020 presidential election results, catapulting the once-unknown Republicans to the top of GOP delegates’ list. If elected, Karamo would be the swing state’s chief elections officer — with major implications for the 2024 election — and DePerno has vowed to prosecute political enemies, including his opponent, Attorney General Dana Nessel.

The convention, which spanned into the evening, was at times chaotic, with controversies over balloting for the AG race and several GOP leaders complaining about the nominees’ electability in November against Nessel and Secretary of State Jocelyn Benson.

“Seems like a forensic audit is in order,” tweeted Greg McNeilly, former chair of the DeVos-funded Michigan Freedom Fund, referencing a familiar cry of Republicans who still insist Trump won in 2020.

Karamo, an educator from Oak Park who spoke at a QAnon convention, won in a landslide with 70% of the total vote — beating out Chesterfield Township Clerk Cindy Berry and state Rep. Beau LaFave (R-Iron Mountain).

In her victory speech, Karamo exhorted delegates to vote for DePerno. She also said afterward that she was looking to get the support of independents and “soft Democrats.”

“Today marks the first step towards taking back our state and our country. I am eternally grateful to the freedom-loving patriots of the convention who put their trust in me to be their standard bearer,” DePerno said in a statement. “Together, we will create a red wave to wash over the Wolverine state this fall. My general election opponent, Dana Nessel, is a socialist Soros sycophant, out of touch with Michigan voters. In November, he will be out of time as well. I look forward to continuing to campaign across the state.”

Karamo and DePerno also earned the unheard-of nomination from Michigan GOP Co-Chair Meshawn Maddock — as chairs traditionally stay neutral — another big boost to their candidacies. Maddock is a close ally of Trump.

Trump congratulated Karamo and DePerno — notably hours before DePerno had officially won — saying that the two candidates will continue to question the results of the 2020 election, which President Joe Biden won by more than 154,000 votes in Michigan.

“I will back them strongly,” Trump said in a statement. “Michigan is one of the worst on election fraud and corruption, and they will put an end to it. At the same time, they’ll get to the bottom of the 2020 election fraud!”

But the AG and SOS nominations were the main event.

In the first round of voting, DePerno garnered 49% of the delegates’ votes, Leonard received 40% of the votes and state Rep. Ryan Berman (R-Commerce Twp.) received 11% of the votes.

Since none of the candidates for attorney general passed the 50% of the votes threshold, which would have automatically won them the party’s endorsement, delegates had to stick around for a second round of voting.

After the first round, Berman was eliminated and endorsed Leonard ahead of the runoff election, making the case that he believed DePerno would lose to Nessel.

Shortly after the second round of voting began, Maddock paused voting because of a confusion with the ballots. The ballots did not match how the names were listed on the projector screen in the large conference center where the voting was taking place.

This comes as Maddock is a key figure in Trump’s efforts to overturn the 2020 election he lost, serving as a fake elector to the Electoral College. She has attended a Lansing protest calling for a so-called “forensic audit” and also was in Washington, D.C., for a protest before the Jan. 6, 2021, insurrection. 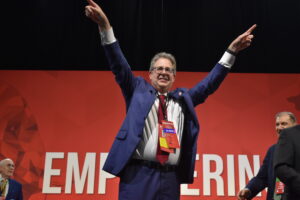 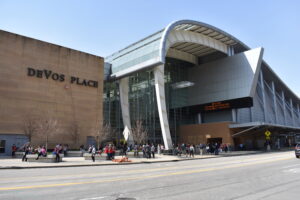 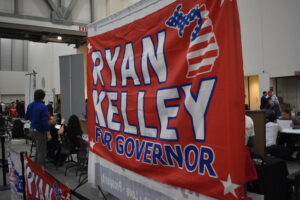 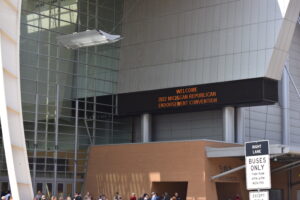 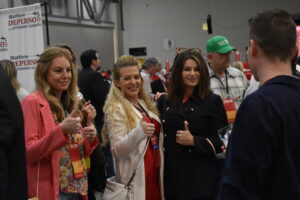 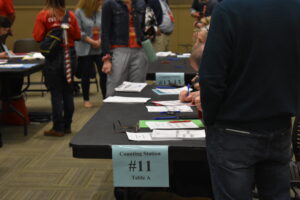 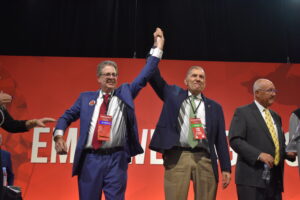 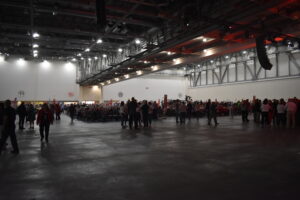 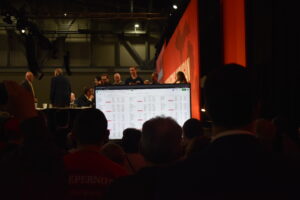 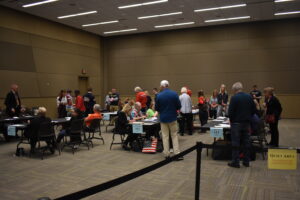 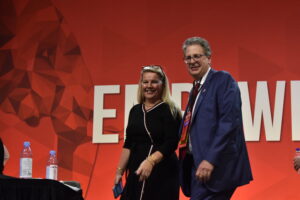 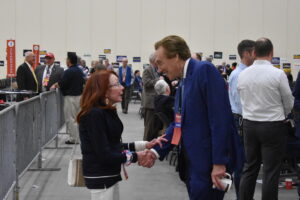 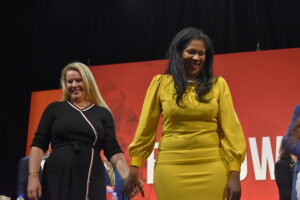 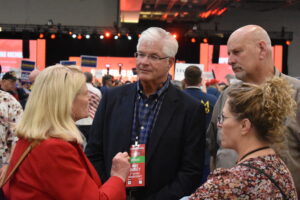 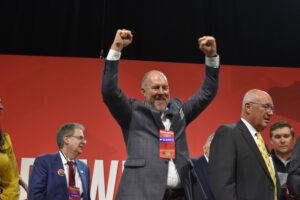 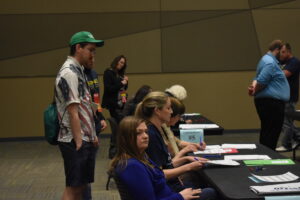 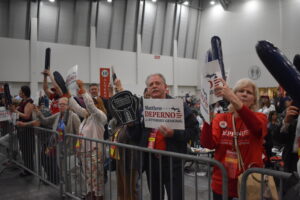 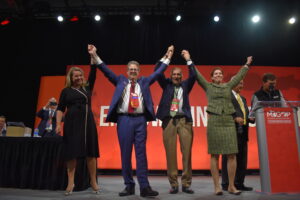 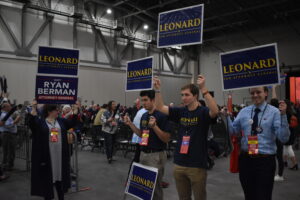 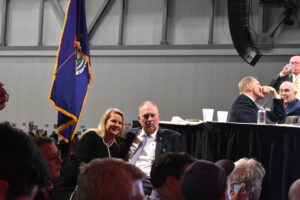 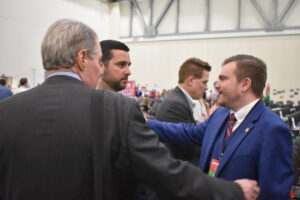 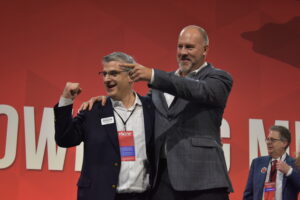 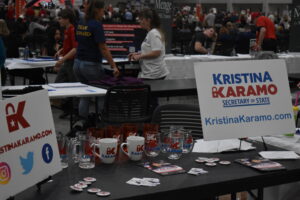 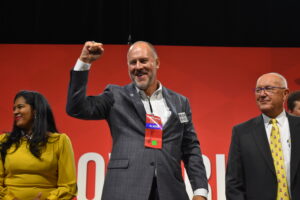 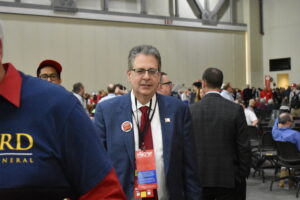 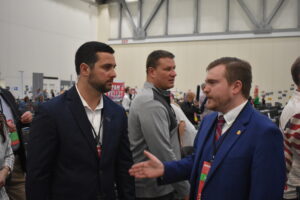 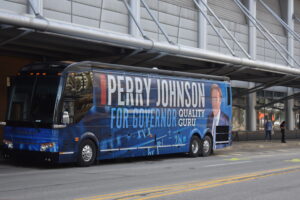 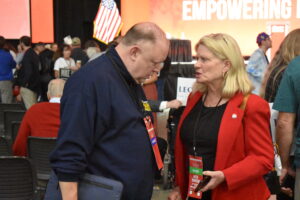 Leonard conceded, but did not mention DePerno in his statement.

“I’m deeply humbled and encouraged by the profound support of so many Republican delegates throughout Michigan who put their confidence in me. While this race did not turn out the way we had hoped, Jenell and I will always be grateful for their support of our positive, issue-focused campaign,” Leonard said in a statement. “Their support means the world to us, and it was an honor to fight alongside so many dedicated people. In the months ahead, I’ll continue working with fellow Republicans to elect conservative candidates up and down the ticket.”

“Even I am at a loss for words at this ridiculous turn of events,” Nessel tweeted. “Running the State of Michigan is a serious business and these are clearly not serious or competent people. God help us if this party takes over our executive offices.”

“My opponent is more focused on peddling divisive fake conspiracies & lies than providing competent, customer-service driven leadership,” Benson tweeted. “Not only will she undermine our democracy, she won’t focus on ensuring @MichSoS services are efficient and affordable.”

Lavora Barnes, chair of the Michigan Democratic Party, said the Republican Party “should be ashamed of the candidates they endorsed.”

Barnes called Karamo a “fear-spreading, inexperienced extremist” and said DePerno is “one of Trump’s lackeys, clearly in the back pocket of the former president and willing to break the law on a whim.”

There were some issues at the convention with media, as some outlets, like the Michigan Advance, weren’t granted credentials, although an Advance reporter was able to obtain them on Saturday. Some reporters said they were give “Whitmer Protection Team” badges.

One of the credentials media members are apparently getting for tomorrow’s Michigan GOP convention.

“Fake news” would have been more concise. pic.twitter.com/xgysaXpgk7

Another convention will be held in August where precinct delegates will officially nominate the candidates to represent the party in the general election.

During an Aug. 2 primary election, Republican voters will vote for their gubernatorial, congressional and legislative candidates.