After 13 years of work and a nearly $1 billion investment, state and national leaders came together in East Lansing Monday for a prestigious ribbon-cutting ceremony for the one-of-a-kind scientific facility.

The Facility for Rare Isotope Beams (FRIB), housed on Michigan State University’s campus next to academic buildings and across the street from the MSU Law Library, accommodates a “next generation” nuclear structure and nuclear astrophysics accelerator that could lead to an untold number of scientific and societal advancements. It has been in the works since 2008 and is finally set to come online for experiments next week.

“Over a decade ago, the Department of Energy, MSU and the state came together to make a bet on Michigan. The bet has paid off,” Whitmer said, speaking from the stage of a packed Wharton Theater auditorium.

About $730 million has been poured into the cutting-edge nuclear science research project over the years, with most of the funds coming from the federal government. Operational costs at the facility put that figure closer to $1 billion.

The lawmakers have all been a part of the bipartisan effort to secure federal funding for the facility over the last 13 years.

“MSU is No. 1 nationwide in research supported by the Department of Energy, and we are going to see breakthroughs that we can’t even imagine today. It will change our lives, our security, our health care, our jobs, opportunities for students to dream big dreams,” Stabenow said.

The U.S. Energy Department’s Office of Science (DOE-SC) first announced the project in December 2008, selecting MSU to design and construct the first-of-its-kind facility.

Granholm said that year was otherwise “brutal.” She was in her second term as Michigan’s governor when the Great Recession hit, which left the state and nation reeling economically.

“Many of us up here were working together to try and lift Michigan from its knees. And it was hard,” Granholm said, gesturing to the lawmakers on stage. “In 2008, the notion of being able to give people hope about the future was really important, even as people were struggling so much.” 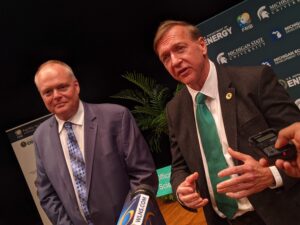 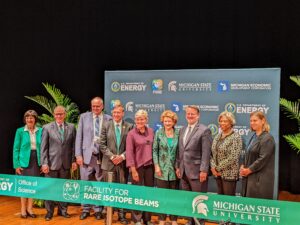 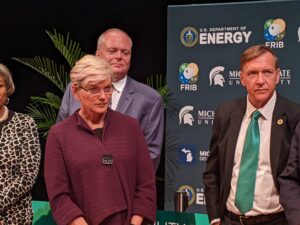 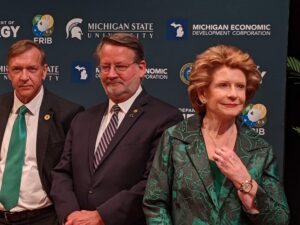 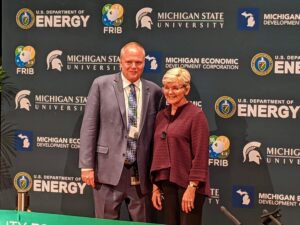 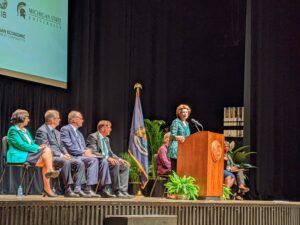 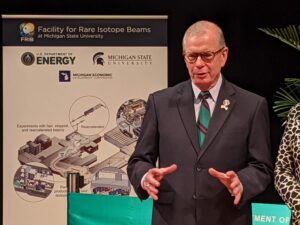 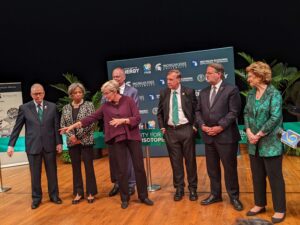 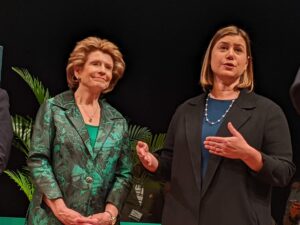 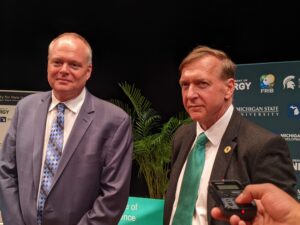 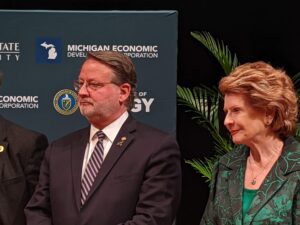 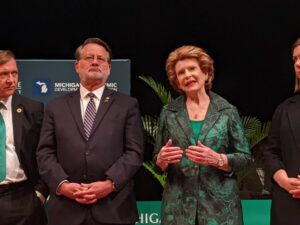 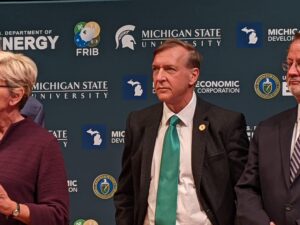 A Michigan university being chosen to house the FRIB became “a beam of hope that sliced through what was really such a painful moment,” she said.

Construction of the FRIB began in 2014 and two additions to the facility — the Cryogenic Assembly Building and the High Rigidity Spectrometer and Isotope Harvesting Vault — were completed in 2020. The DOE designated FRIB as the nation’s 28th DOE-SC user facility that year.

The project was officially completed and approved in January.

The FRIB hosts the world’s most powerful heavy-ion accelerator, which will allow researchers to study the properties of rare isotopes. By studying these short-live atomic nuclei, many of which have never been observed on Earth, scientists will be able to make discoveries that will shed light on the formation of the elements, nuclei physics, nuclear astrophysics and many other untold properties of the universe.

“Only in Michigan can we manufacture that kind of precision instrumentation. Only in Michigan State can we attract the top level folks from across the country,” Slotkin said.

Around 2,000 isotopes have been studied worldwide over the last century; the FRIB is expected to increase that number to approximately 5,000.

The facility has so far received research proposals from more than 1,600 scientists from around the world, according to FRIB Director Thomas Glasmacher.

“This is how it’s supposed to work in government,” Slotkin said. “… We’ve secured $635 million in federal funding over the lifetime of this project. There are very few projects across the country that can say over this lifespan have been able to keep up that bipartisan support.”

Here's the full text of Biden’s State of the Union address by Michigan Advance March 2, 2022
‘He’s doing their bidding’: Critics say Republicans use… by Anna Gustafson April 17, 2022
Who are the candidates for the four statewide education… by Julia Forrest October 13, 2022