As the nation still grapples with the late Monday news of a leaked draft opinion from the U.S. Supreme Court, which confirms that the court plans to overturn Roe v. Wade, Michigan GOP senators took a break from session Tuesday to partake in a closed luncheon with Right to Life (RTL) of Michigan.

RTL has long been an anti-abortion powerhouse in Michigan GOP politics. It held an already-planned “legislative day” lunch in the Radisson Hotel Tuesday near the state Capitol, which ended up coinciding with the SCOTUS leak the night before.

Genevieve Marnon, legislative director for RTL of Michigan, was asked for comment but declined, saying through another staffer that the lunch was a “closed event.”

That draft opinion was leaked and reported by Politico before being confirmed as authentic by the court on Tuesday. Although the draft isn’t final, and was apparently written in February, the news has still put abortion advocates in Michigan on the defensive.

If the 1973 landmark decision in Roe v. Wade is overturned, Michigan would be one of more than two dozen states with a “trigger law” to immediately criminalize abortion. Michigan’s 1931 law criminalizes abortions in all instances except to protect the life of the pregnant woman. The 91-year-old law is not enforceable as long as Roe still stands.

All Democratic incumbents in those offices — Gov. Gretchen Whitmer, Attorney General Dana Nessel and Secretary of State Jocelyn Benson — are opposed to the 1931 law and support upholding Roe. 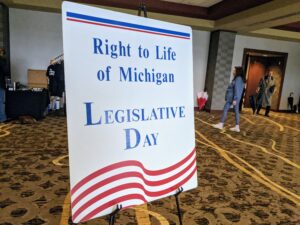 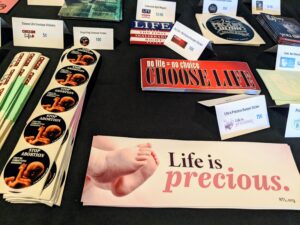 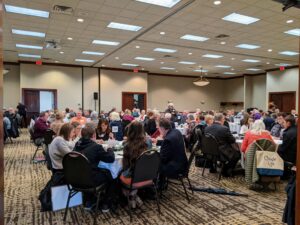 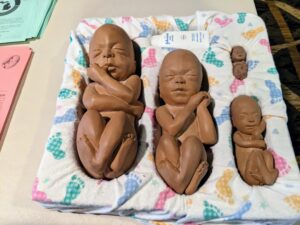 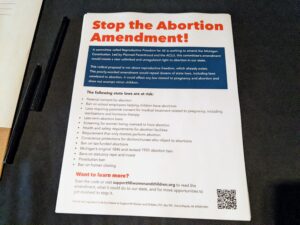 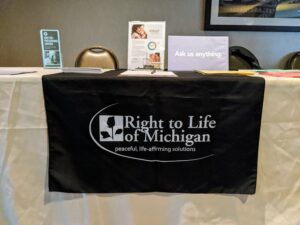 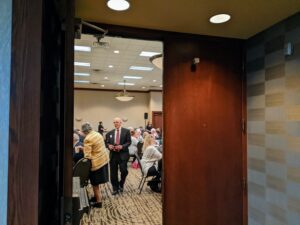 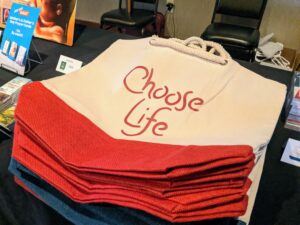 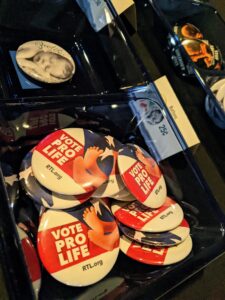 The reactions of GOP officials and candidates to the Supreme Court news were largely focused on concern about the leak itself, although some were purely celebratory.

“Life is winning!” GOP gubernatorial candidate Garrett Soldano tweeted Monday night. Soldano received backlash in January for telling a right-wing podcast that rape victims who become pregnant must “protect that DNA and allow it to happen.”

Some GOP reactions were graphic.

“The same arguments used [to] justify the enslavement and abuse of Black Americans, is [sic] used [to] burn and dismember unborn children,” Karamo tweeted.

DePerno said overturning Roe would be “such a great win for the unborn and for states’ rights.” Michigan Republican Party Co-Chair Meshawn Maddock retweeted DePerno’s post.

In a Twitter thread, U.S. Rep. Bill Huizenga (R-Zeeland) said that a ruling to overturn Roe would be “the correct decision” — but added that the leak of the draft ruling is “an effort to overtly inject politics into the court itself.”

“This individual [who leaked the draft] should not be celebrated,” Huizenga said. “They should be held accountable for their egregious breach.”

Similarly, GOP gubernatorial candidate Kevin Rinke said that the Supreme Court “acted properly” in the draft opinion but added that “leaks from the #SCOTUS are unacceptable,” while former U.S. Rep. Justin Amash, a Republican turned Libertarian, said the leak “destroys trust among the justices and undermines justice.”

Meanwhile, Michigan Democrats — from the Legislature to the executive office — reacted with a mixture of devastation and determination to fight back.

“The words ‘Roe overturned’ are no longer theoretical,” Gov. Gretchen Whitmer said Tuesday. “I want every Michigander to know — no matter what happens in D.C., I’m going to fight like hell to protect access to safe, legal abortion in Michigan.”

“A woman must be able to make her own medical decisions with the advice of a healthcare professional she trusts. Politicians shouldn’t make that decision,” Whitmer continued. “If the U.S. Supreme Court refuses to protect the constitutional right to an abortion, the Michigan Supreme Court should step in.”

“I was so angry last night, I couldn’t sleep at all,” Bayer said. “… It’s just irresponsible at best, and just horrifying at worst.”

Bayer said overturning Roe is part of a long-game effort from Republicans that will not stop at toppling abortion access.

The Democrat also said she would “literally be dead right now” if Roe had not protected her right to have a safe abortion. She had an ectopic pregnancy at age 29, which would have caused fatal internal bleeding had she not undergone the procedure.

Bayer said Democrats plan to introduce a bill to provide free birth control for Michiganders. She predicted that the Roe being overturned will trigger a blue wave in November — “I can already feel the swell today,” Bayer said. “I don’t think women are going to wait.”

“No state in the union will feel the brunt of this upcoming ruling quite like Michigan,” said MDP Chair Lavora Barnes, calling the 1931 abortion ban “dangerous and draconian.”

“Though we are sorely disappointed, we are not surprised as we have anticipated this outcome,” Stallworth said. “It’s a disastrous outcome for every person in our country. The fact remains that abortion bans are harmful, inhumane, and discriminatory.

“The unfortunate reality is that our fate is now in our own hands; the U.S. Supreme Court will not protect us. Our campaign to enshrine right to an abortion in the Michigan Constitution is essential, and we must remain vigilant and energized to see it through to the finish because the clock is ticking.”