Berelian Karimian, a co-captain for March For Our Lives Lansing, poses with a sign saying “Never again,” beside the Capitol steps, June 11, 2022 | Kyle Davidson

Hundreds of students, parents and education professionals filled the capitol lawn Saturday morning calling for solutions to gun violence in response to a spate of mass shootings across the nation.

The protest was organized by March For Our Lives, a youth-led movement focused on civic engagement, education and direct action by youth to eliminate gun violence. March For Our Lives also held corresponding events across the United States, including Washington, D.C., and Oxford, the site of a school shooting in November.

Neelu Jaberi, co-captain of March For Our Lives Lansing and an incoming senior at Okemos High School, said she was inspired to take action against gun violence to a lack of response from politicians.

“Even though we are youth and that this shouldn’t be our fight, we are going to fight for our lives because they matter to us and I don’t want other kids to have to deal with lockdown drills anymore,” Jaberi said.

“I can’t vote, but I’m counting on those who can to [vote for politicians] who actually want to see change,” Jaberi said.

Protestors joined in chanting, “Enough is enough” and “Vote them out,” while speakers focused on the problem of  mass shootings and lawmakers opposed to legislation intended to prevent gun violence.

Whitmer appeared with one of her daughters and acknowledged the fear created by gun violence and mass shootings.

“The students who keep showing up for school are certainly not numb to this. The teachers and the parapros and the bus drivers and everyone who continues to make our schools go are not numb to this. And the parents who are fearful when they send their children simply to school are worried as well,” Whitmer said.

Since the shooting in Oxford, 538 more people in Michigan have died as a result of gun violence, including 27 children, Whitmer said.

“We need to stop gun violence and we need action now. There are basic steps that we can take to keep guns out of the hands of violent criminals, terrorists [and] domestic abusers,” Whitmer said.

On Friday, Whitmer signed House Bill 6012 to help schools implement risk assessments to assess campus safety and identify where future investments may be needed. The bipartisan bill also helps schools complete critical incidence mapping for their campuses, ensuring that emergency plans and protocols are effective and in-place, awarding $2,000 grants to all schools including public, intermediate school districts and private schools to complete a comprehensive safety and security assessment.

Stabenow also called for change, discussing her experience in the Legislature creating bipartisan law to protect children in car accidents.

“Firearms are now the leading cause of death for our children. It’s not cancer.  It’s not poisonings. It’s firearms. Well you know what, it used to be car accidents,” Stabenow said.

“We put together legislation to require car seats. … It was controversial,” Stabenow said.

Stabenow also alluded to bipartisan action being taken in the U.S. Senate.

“There’s a good chance we’re going to get movement [on legislation]. It will not be everything that you and I know will save lives, but it will, if we’re able to do it, be an important step forward,” Stabenow said. 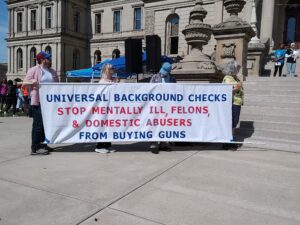 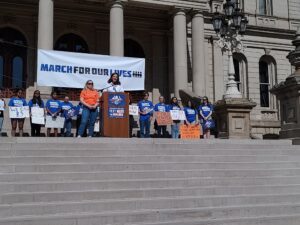 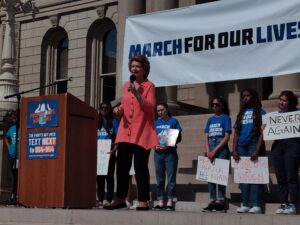 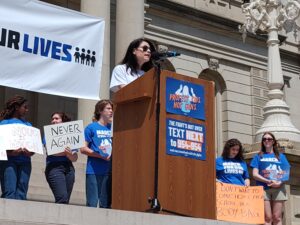 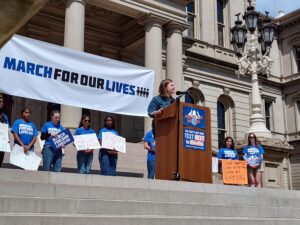 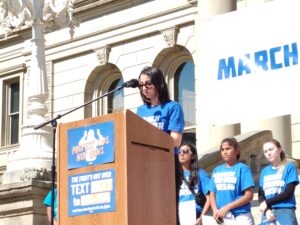 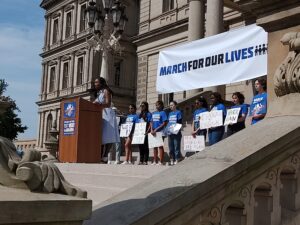 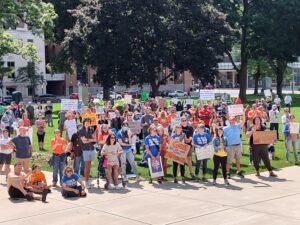 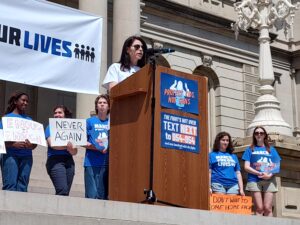 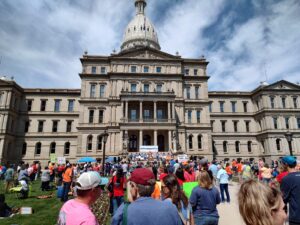 “It’s not complicated. It says if you are a gun owner and you know you have children in the home, you have to take reasonable steps to secure that weapon. And if a child takes that weapon and uses it in a crime like mass murder, you can be criminally charged and go to jail in five years,” Slotkin said.

“It’s not about your access to a gun, it’s about being responsible when you have that weapon,” Slotkin said.

While this bill and other bills intended to prevent gun violence passed the Democratic-led House with some bipartisan support, Slotkin doesn’t expect the package to move in the evenly divided Senate.

“There is a quiet negotiation going on in the Senate right now, and that is where I am focusing all my energy, all my drive, all my lobbying,” Slotkin said.

Slotkin encouraged activists to pay attention to the U.S. Senate, stressing that rallies are connected to motivation and mobilization and can sometimes change policies.

In her speech, Nessel encouraged voters to elect officials who will act against gun violence.

Nessel also criticized her Republican opponent this fall, Matthew DePerno, for his interpretation of the Second Amendment.

“My Republican opponent, Matt DePerno, has said that he believes that the Second Amendment does not allow for any regulations of any kind at all on firearms,” Nessel said.

“I wonder sometimes, did you actually read the Second Amendment. It actually has the words, ‘a well regulated militia,’ and it’s not that long; it’s really not that long,” Nessel said.

Jeff Whittle, who has worked as a special education paraprofessional for almost 31 years discussed how the threat of gun violence impacts students with disabilities.

“Many students are taught to run and flee from the building. … That isn’t possible in many of these special education classrooms when you have 13 wheelchairs and students with physical disabilities,” said Whittle, who serves on the Governor’s Educator Advisory Council.

Berelian Karimian, a graduated senior from Okemos High School and co-captain of March For Our Lives Lansing, said the organization has held lobbying days to call for universal background checks, safe storage at home and mental health professionals at school.

“Some of them refused to meet with us, some of them met and just kind of shooed us away,” Karimian said.

“As a young person in today’s society, anything that happens on the top affects us. Whether it be something that will affect us 50 years from now or today everything impacts us. It’s not even just an issue at schools. We could be walking down the street, we could be hanging out with our friends and something could happen to us. It’s a sense of security that we really want,” Karimian said.