‘Get with the program, or we vote you out’

Wiping sweat from foreheads under a relentless June sun, the speakers at Mothering Justice’s 10th annual “Mama’s March” — mothers and lawmakers and reproductive health leaders and activists — took to the podium Wednesday outside the Michigan Capitol in Lansing.

There, they turned towards the Capitol, a towering mountain of brick and sandstone, and issued a message for legislators who have not supported reproductive rights, paid leave, affordable child care, and fair wages: Change must come. And if it doesn’t, get ready to find a new job.

“I tell you legislators this: You either get with the program, or we vote you out,” said Trische Duckworth, a community organizer from Ypsilanti and the founder of Survivors Speak, a group that advocates for a range of social justice issues.

“This ain’t personal,” Duckworth continued. “It’s just business. It’s the business of humanity. And until you do us right — well, I wasn’t going to go Bible, but I’m going to tell you: Everybody reap what they sow.”

At that, audience members leapt to their feet and cheered loudly enough that the legislative aides hurrying into the Capitol stopped to look.

Access to quality childcare, an ability to earn a living wage and to access quality schools and clean air, those issues are so intersectional with access to sexual and reproductive health care and the ability to make your own life decisions about your body and your life circumstances.

A Detroit-based racial and gender justice advocacy organization, Mothering Justice each year organizes what’s known as the “Mama’s March,” when Black mothers and mothers of color travel from southeastern Michigan to Lansing to advocate for a variety of issues that Mothering Justice identifies as priorities.

This year, those included reproductive justice — the idea that individuals have the right to choose whether or not they have children, have access to abortion and be able to raise their family in a safe and healthy environment — affordable child care, paid leave and earned paid sick time, access to doulas, and fair wages.

This year’s event took place under the shadow of Roe v. Wade, the landmark decision that enshrined the right to abortion in the United States Constitution, poised to be overturned by a right-wing Supreme Court.

Those who spoke during Wednesday’s event — which this year was named “Mama’s March 2022: Womxn Versus Wade” — said the end of Roe would be devastating. It would be particularly traumatic for Black women and other women of color because systemic racism has left them to navigate an environment that’s often toxic – literally and metaphorically – for them and their families, including poverty, limited access to health care, and dangerous environment problems like breathing toxic air, among a litany of other issues, speakers said.

“Access to quality childcare, an ability to earn a living wage and to access quality schools and clean air, those issues are so intersectional with access to sexual and reproductive health care and the ability to make your own life decisions about your body and your life circumstances,” said Nicole Wells Stallworth, the executive director of Planned Parenthood Advocates of Michigan, the advocacy arm of Planned Parenthood of Michigan.

“We are now in the midst of one of the most important and most pivotal times in our history,” Wells Stallworth continued. “And for those of us in Michigan, the fallout from what appears to be an imminent reversal of Roe v. Wade could be disastrous. It could mean that 2.2 million Michiganders of reproductive age who come from all walks of life would be denied their basic right to sexual and reproductive health care, the health care they deserve to live their fullest and happiest lives.”

If Roe is overturned, Michigan has a 1931 felony abortion ban on the books – but it is currently unenforceable after Court of Claims Judge Elizabeth Gleicher granted a preliminary injunction in a suit brought by Planned Parenthood against the ban. 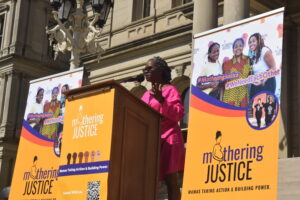 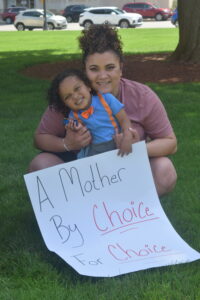 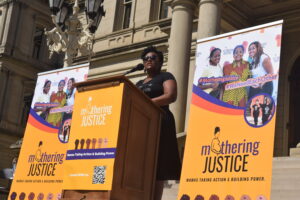 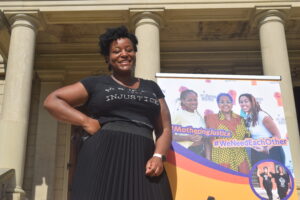 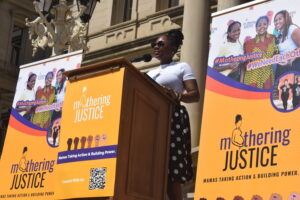 The GOP-controlled Legislature intervened in the suit earlier this month. In a motion filed on June 6 in the Court of Claims, the Michigan House and Senate asked to intervene as defendants in the Planned Parenthood lawsuit. In that same motion, the GOP lawmakers asked the court to reconsider its May 17 order that issued the preliminary injunction.

“I have made very clear that I will not put the lives of Michigan women in jeopardy by using the resources of my office to defend Michigan’s 1931 statute criminalizing abortion,” Nessel said in a prepared statement. “This is in stark contrast to a state GOP budget plan that sets aside $750,000 in state funding to enforce this archaic law and puts restrictions on funds going to medical providers.”

Republicans have passed budget legislation to include $750,000 to defend the 1931 law that makes abortion a felony.

Wells Stallworth called the decision to become a parent “one of the most important and life-changing decisions a person will ever make.

“We make these decisions based on our own life circumstances, and we deserve nothing less,” she continued. “This is about being able to choose our own life’s outcomes and our own life trajectory without the interference from politicians, systems and government. Forcing a person into parenthood affects everyone, and we should all be outraged.”

“We’re in a state of emergency whether you know it or not,” Duckworth said. “Our voting rights, our women’s reproductive rights. We can’t even get paid time off. Who does that? Who sees a woman suffering but does not render her what she needs to be successful as a mother? Who does that? People that are sitting in offices making decisions for us without us.”

It’s that idea — that lawmakers are crafting policy without any input from those who the policies most affect — that Wednesday’s speakers are determined to change.

“Together, we can make this Legislature hear us, but only if we are together,” Mothering Justice Executive Director Danielle Atkinson said. “We have the independent political power as mothers of color to move the arc of justice, to bend it, to the families that need it the most.”

Together, we can make this Legislature hear us, but only if we are together. We have the independent political power as mothers of color to move the arc of justice, to bend it, to the families that need it the most.

Atkinson emphasized that Mothering Justice is a “pro-choice organization” that “firmly believes that a pregnant person should be able to make a decision about their future.

“We are extremely worried about the ramifications of Roe v. Wade being overturned, but it is one of many, many issues that pregnant and parenting people deal with.”

The importance of addressing those issues, from needing living wages to a lack of affordable childcare, became especially apparent during the COVID-19 pandemic, Atkinson said.

“What the pandemic made clear was how dependent we are on a system that doesn’t support us,” she said.

Tia Marie Sanders, a parent and community advocate from Novi, said the fallout from systemic racism and sexism — such as Black women being paid less and unaffordable childcare — have left mothers and families with often disastrous situations during the pandemic.

“I meet women every single day at the [University of Michigan] clinic for COVID survivors,” said Sanders, who suffers from Long COVID. “It’s predominantly filled with Black women from all over southeastern Michigan. Their worry is, ‘What am I going to do when this day of pay is gone [after seeking care at the clinic]? How am I going to pay for daycare?”

As she navigates her life with long COVID, Sanders explained she has “fatigue, insomnia, forgetfulness, confusion, difficulty concentrating.”

There are likely millions of Americans suffering from Long COVID – a chronic illness that leaves individuals living with a wide variety of often debilitating COVID symptoms for months, or even longer, past their original COVID diagnosis – and experts said anywhere between 10% and 35% of those who have had the virus go on to develop Long COVID.

Black Americans have faced disproportionately high rates of COVID-19 infection, hospitalization and death – and while health experts have said there is a prevalence of Long COVID in the Black community, there’s a lack of access to treatment and Black Americans have not been included in Long COVID trials to the same extent as white people.

That means, speakers noted on Wednesday, that many Black mothers and families are now navigating a whole new set of barriers on top of the deeply rooted ones they were already dealing with, like low wages and unequal access to health insurance.

“When we can’t get the time off that we need when we’re ill, let alone the time off that we need to recover, it impacts every single thing we do in this country,” Sanders said. “Right now, the labor force is struggling to find laborers to come and keep the restaurants open, to come and keep the schools open. Yet they have not drawn the line you and I know already: If you do not take care of your workers, you cannot count on them.

This is about being able to choose our own life’s outcomes and our own life trajectory without the interference from politicians, systems and government. Forcing a person into parenthood affects everyone, and we should all be outraged.

State Rep. Kyra Bolden (D-Southfield) said lawmakers must fight further for funding for research around health matters that affect Black women — such as uterine fibroids, which Bolden discovered she had in April 2020. Nearly 25% of Black women between the ages of 18 and 30 have fibroids, compared to 6% of white women of the same age, the University of Michigan reported.

After discovering she had fibroids at Planned Parenthood because her gynecologist could not see her quickly enough at the start of the pandemic, Bolden said she ended up having surgery to remove seven fibroids, the largest of which was about the size of a mango. The recovery process took about seven weeks, she noted.

“There are many conditions that affect Black women more severely than other races, and we need more research and education about those things,” she added.

“Whether it’s the very, very long, persistent fight for paid sick leave … or whether it’s access to childcare, or making sure our kids have adequate funding in our public schools, making sure that we’re addressing disparities in health care — especially in Black maternal health — making sure that we’re fighting for reproductive justice, I want you all to know and realize just how powerful you are,” Geiss said. “I know that we need to keep marching, keep insisting on these policies.”

‘Get with the program, or we vote you out’