William McConico, chief judge of 36th District Court, said settling the class-action lawsuit, filed in 2019 just before he became the chief, presented an opportunity to show that law enforcement and activists can work together to change the criminal legal system. | Ken Coleman

Michigan’s largest district court and social justice advocates announced on Tuesday that they have settled a federal class-action lawsuit over cash bail practices, which activists say routinely and unconstitutionally jail poor and working-class defendants despite evidence of their inability to pay.

Phil Mayor, senior staff attorney for the ACLU of Michigan during a news conference described the situation at the court as a case of “mass incarceration.”

“It is a system that has devastated families, separated parents from their children, caused people to lose their jobs and housing, and has wasted millions of dollars in taxpayer money,” said Mayor.

William McConico, chief judge of 36th District Court, said settling the class-action lawsuit, filed in 2019 just before he ascended to the role, said that law enforcement and activists can work together to change the criminal legal system. McConico, a former state House member, was appointed to the court in 2010 by Democratic former Gov. Jennifer Granholm.

“Other African-American cities will be able to point to what one of the largest district courts in the country is doing to address this issue,” said McConico, an Black native Detroiter. “That’s why it is so important that this is starting in a major Black city, that it is not being rolled out in a suburban city or a small court.” 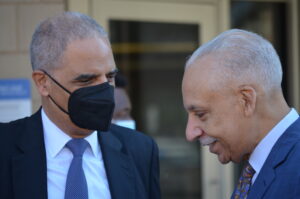 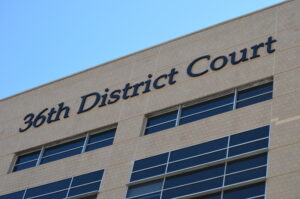 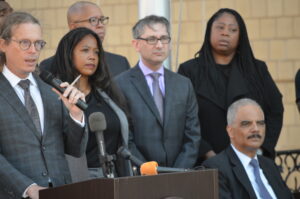 “This is how our criminal justice system should work,” said Holder, who served during the Democratic President Barack Obama administration. “It can, and should be, a model for other jurisdictions across the country.”

On any given day in Detroit, which is 79% African American, nearly three-quarters of those jailed are Black, a proportion much higher than their share of the population, the court noted.

The lawsuit, filed on behalf of seven Black plaintiffs in U.S. District Court, described a two-tier legal system in which a person’s freedom depends on their ability to afford bail, a clear violation of due process and equal protection.

“The named plaintiffs in this case have all been detained since their arrests and remain in jail because they cannot afford the bail set in their cases,” a portion of the complaint reads.

The lawsuit also claimed violations of the right to counsel because poor people accused of crimes are not provided attorneys to represent them when bail is being set.

Before filing the lawsuit, the ACLU observed hundreds of court proceedings over several years. It found:

In Houston, people in jail can still go to the polls by Kira Lerner March 15, 2022
In wake of Lyoya’s death, a reckoning with Grand Rapids’… by Anna Gustafson May 7, 2022
Here's the full text of Biden’s State of the Union address by Michigan Advance March 2, 2022