As Starbucks hosts one of its most profitable days of the year, workers stood on the picket line to demand contract negotiations.

Workers at the Starbucks at 1141 E Grand River Ave. in East Lansing picketed outside the store on Thursday over issues of safety, staffing and workplace conditions.

According to a report from CNBC, more than 100 unionized Starbucks planned strikes for Thursday, calling it the largest collective action taken by Starbucks organizers over the past year. The chain has nearly 9,000 corporate locations across the U.S. with roughly 260 of those locations voting to unionize in the past 12 months.

These strikes coincided with Starbucks’ “Red Cup Day,” where customers receive a free reusable cup with the order of a seasonal beverage.

While the East Lansing location voted to unionize in June, Emily Grasel, an organizer, shift supervisor and strike captain at the East Lansing Starbucks, said the company is dragging its feet when it comes to bargaining.

“Some people haven’t even gotten any bargaining sessions, our store has gotten one. But we were there for six hours and Starbucks came in the room for three minutes,” Grasel said.

Grasel noted issues in staffing, with the location struggling to find workers to open the store and as well as toward the end of the night. 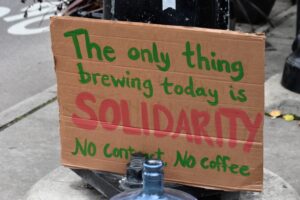 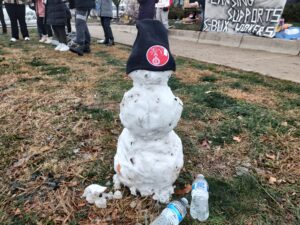 Picketing workers reported issues with staffing and safety within the Grand River location, as well as a lack of resources needed to run the store smoothly, Nov. 17, 2022 | Kyle Davidson 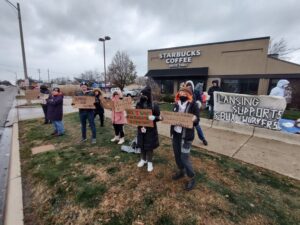 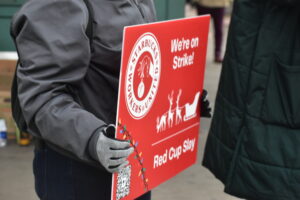 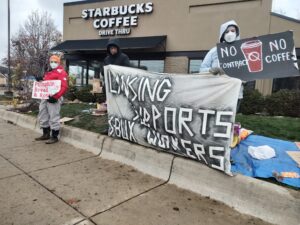 icketing workers reported issues with staffing and safety within the Grand River location, as well as a lack of resources needed to run the store smoothly, Nov. 17, 2022 | Kyle Davidson 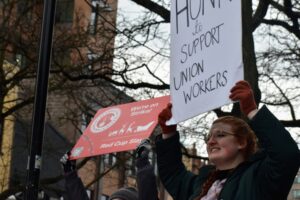 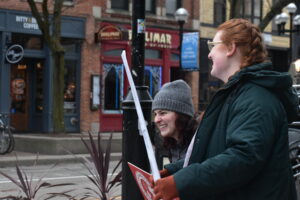 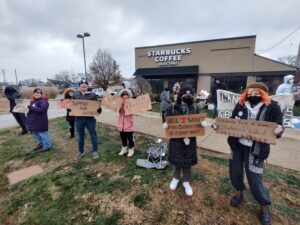 On the picket line, some members wore hats showing a Starbucks Workers United ornament held up by the Grinch who stole Christmas, Nov. 17, 2022 | Kyle Davidson 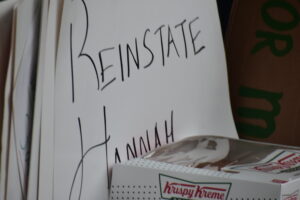 Mia Misener, a 23-year-old barista who has worked in the location since January said even if the store was properly staffed, the cafe does not have the materials needed to run the store smoothly.

“People will wait a long time for their coffee,” Misener said. “Our drive-thru will wrap all the way around to the street, we’ll have lines of customers inside, and then we’ll get 20 mobile orders in one minute and we only have two machines to make the drinks.”

In addition to issues with staffing, workers at the East Lansing location also noted issues regarding safety concerns with customers.

Grasel noted a recent example where a man trapped her in a bathroom and attempted to get inside. While she filed an incident report, that was not enough to ban him from the location. When the man returned the next day, police were unable to remove him, as he had not been banned from the location.

“We’re just looking to get our contract,” Grasel said.

“This is a response, showing [Starbucks] we need them to come to the table and get this contract in the works,” she said.

Workers at several Starbucks locations in the Ann Arbor area also picketed Thursday — including the stores on 300 S. Main St. and 120 S. Zeeb Rd., where Starbucks employees were striking for the first time.

At the Main Street location at the heart of downtown Ann Arbor, protest signs included those in support of former employee Hannah Whitbeck. Whitbeck had worked at the location for three years until Starbucks fired her in April for helping her store organize.

The National Labor Relations Board ruled last month that Whitbeck was fired illegally by the company. Starbucks is required to offer her reinstatement with back pay.

In an emailed statement from a Starbucks spokesperson, the company said it respects the right of its union partners to protest.

In response to questions of engagement the company said it has continued to engage with union representatives in attempts to move the process forward, showing up to 50 sessions across the country with 60 sessions scheduled in the coming weeks.