The 2022 midterm elections featured a number of competitive congressional and legislative races across the state, from Traverse City to Midland and from Grand Rapids to Downriver.

Democratic Gov. Gretchen Whitmer, who won reelection by 11 points, will enter her second term with a 56-54 Democratic majority in the House and a 20-18 Democratic upper hand in the Senate.

With Democrats bucking history and winning control of the Legislature for the first time in about 40 years — as well as a majority in the congressional delegation — it seems clear that the state’s new redistricting process played a role.

In 2018, Michiganders approved a constitutional amendment, Proposal 2, reforming the redistricting process and creating the Michigan Independent Citizens Redistricting Commission (MICRC). In the past, the Legislature was in charge of drawing new districts every decade, with the governor’s sign off, which typically resulted in maps that protected incumbents and the party in charge.

But after the 2020 census, the new MICRC — composed of four Democrats, four Republicans and five independents — created new maps for the state House, state Senate and Congress with more competitive districts.

Nancy Wang, director of Voters Not Politicians, which spearheaded the 2018 measure, told the Advance that the “fair maps” produced by the commission “had a dramatic impact on the election results.”

“Voters made their voices heard,” Wang said. “Now that we have a level playing field because of the commission’s fair maps, you actually see the votes of the people translate directly into who was elected on Election Day.”

Democrats haven’t controlled the Michigan Senate since 1984 nor the House since 2010. Republicans in the Legislature drew district lines for the previous two decades.

In 2018, Democrats won statewide at the top of the ticket with Whitmer, Secretary of State Jocelyn Benson and Attorney General Dana Nessel. But they failed to win enough seats to win the House and Senate.

And in 2016, even with former President Donald Trump winning the state, more Michiganders casted ballots for Democratic House candidates than Republicans. But, because of how district lines were in place, Republicans went on to hold 63 out of 110 seats in the Michigan House.

The League of Women Voters disputed the maps in the courts in 2017 and a panel of U.S. Court of Appeals judges said the maps were violating the Constitution. However, the U.S. Supreme Court ruled two years later that claims of partisan gerrymandering aren’t subject to federal court review.

With the MICRC in charge of redistricting after the 2020 census, there was a brand new process. The commission was required to use seven criteria approved by voters: The lines were divided by equal population while abiding by federal laws like the Voting Rights Act; districts were “geographically contiguous”;  they must reflect state’s diversity; value partisan fairness; not consider incumbency; consider “county, city, and township boundaries’; and be “reasonably compact.”

The Princeton Gerrymandering Project gave the maps high marks and rated the state House and Senate maps as having a slight Democratic lean, while the congressional map had no partisan advantage. However, the maps have faced criticism and lawsuits over the lack of Black-majority districts, as well as from Republicans. 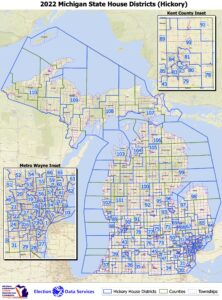 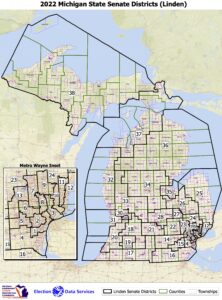 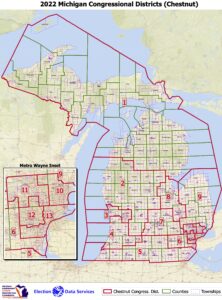 Wang said that the results of this election were exciting to her because of the number of competitive seats in the state. She also was pleased that election results were not “pre-ordained” by state legislators.

“What we said overwhelmingly was that regardless of who we are, what party we supported, we wanted fair elections, we wanted our votes to matter,” Wang said.

“There’s an entire shift in power because of … who the voters voted for,” Wang added.

Anthony Eid, an independent commissioner on the MICRC, told the Advance that the results reflect more voters casting their ballots for Democrats than for Republicans. He also noted that he was “glad” that the competitive races across the state resulting from the newly drawn district lines were as hard fought as the commission’s maps anticipated they would be.

“It’s a win for the citizens of Michigan,” Eid said. “It’s a win for the voters because their voices are being heard. … If Republicans want to retake the majority, I think they have a very clear path. It’s very simple. They simply just have to win more votes, because these are competitive maps.”

“It’s not really about Democrats versus Republicans, it’s about the will of the voters being respected,” Eid said.