A former Lansing-based public relations executive and Democratic consultant, whose career was sidelined by multiple accusations of sexual harassment, has returned to the public eye — as a private eye.

T.J. Bucholz was the owner of Vanguard Public Affairs when allegations of harassment and creating a toxic workplace environment were first reported by Eclectablog in March 2021 and then in multiple media outlets.

Bucholz is currently with the Oakland County-based legal firm George Law, which listed him on its website as a licensed professional investigator. He is listed as “Thomas J. Bucholz” and his photo is the same as his Vanguard headshot.

Eclectablog, a progressive website, shared social media posts by Emily Dievendorf, a longtime Michigan LGBTQ+ activist who is now a Democratic House member from Lansing. She is Michigan’s first openly nonbinary lawmaker and one of the state’s first openly bisexual legislators.

Dievendorf worked with Bucholz in 2010 on the gubernatorial campaign of former House Speaker Andy Dillon (D-Redford), and in 2021 Facebook posts related multiple instances in which Bucholz allegedly sexually harassed her, including frequently propositioning her for sex.

Dievendorf declined to comment to the Michigan Advance for this story.

Eclectablog spoke with several female employees who said the workplace was often chaotic.

Soon after, the Detroit Free Press reported that five other women, all of whom worked for Vanguard between 2016 and 2019, had come forward and related similar experiences with Bucholz including one who said he had displayed a gun and urged her to “touch it.”

Bucholz issued a statement at the time admitting to using “inappropriate language and adult humor” to “go for a punchline or a cheap laugh.”

“I know those types of comments can make people uncomfortable, even when they are said with no malicious intent and I regret those words,” said Bucholz, who added that he wanted to “sincerely apologize and can only say that I will continue to work to make amends with those I have hurt and live my life in a more honest and forthright way.”

Regardless, the fallout from the revelations was immediate, including Bucholz being removed from the boards of Downtown Lansing Inc. and the Central Michigan Public Relations Society of America.

Bucholz’s staff also jumped ship, with Vice President David Lossing announcing he was resigning, as did Jen Eyer, a partner at Vanguard who was elected to a four-year term on the Ann Arbor City Council in November 2020.

Eyer, however, in reports by both the Lansing City Pulse and MLive, was characterized by several of the women accusing Bucholz of being “complicit” in the workplace environment and indifferent to his treatment of them. She denied those claims and said she was “stunned” by the revelations.

“While I never was the object of, and never witnessed, such behavior, I have a great deal of empathy for the women who were subjected to it,” said Eyer in a statement at the time.

The allegations also resulted in several Central Michigan University staff members being suspended while the university investigated whether they knew about the alleged sexual harassment by Buchholz, a CMU alumnus, yet continued to send students to work at Vanguard anyway.

An outside investigation commissioned by the university later cleared the staff members of wrongdoing, but a CMU report said students had reported they had been subjected to a “toxic environment.”

Since then, Bucholz had essentially stayed out of public view until Wednesday when a former employee posted on social media that he was now working as a private investigator. 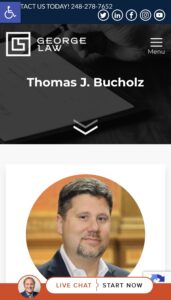 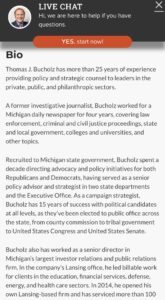 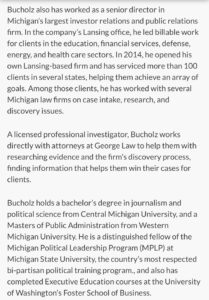 A Google search still turns up a preview for T.J. Bucholz's bio on the George Law website that has since been removed | Screenshot

“My former boss using his shady and skeezy skills to become a PI for the law firm that represented his sexual harassment is NOT something I had on my 2023 bingo card,” tweeted Rachel Felice Lorenz.

Lorenz, who is now a senior manager with the Lambert public relations firm, included a link to the website of George Law.

Lorenz, who worked for Vanguard from early 2018 to the end of 2019, told the Michigan Advance that it was “the most stressful workplace” she had ever worked in and that was entirely due to Bucholz.

“He was very up and down from day to day, so he’d either be really high or really low,” she said. “You never really knew what you were going to get, so you kind of had to stay on your toes.”

Lorenz, who said she was not at all surprised by the allegations of sexual harassment and a toxic workplace, said she had some real concerns when she learned what Bucholz’s new job was.

“My initial reaction was ‘Wow,’” said Lorenz. “ … And for someone who has been accused of sexual harassment to possibly be out there looking into other women, it feels kind of weird to me.”

Lorenz said it also wasn’t a surprise Bucholz ended up working where he did.

“His lawyer was from this firm [George Law] when he was going through all these sexual harassment allegations,” she said. “… They knew who he was from working with him and representing him, and they still chose to hire him.”

After being contacted by the Michigan Advance for a comment on Bucholz’s hiring, the law firm responded with a prepared statement.

“Mr. Bucholz is one of several professional investigators who work with our firm. He is fully licensed just like any other professional investigator in Michigan must be,” reads the statement. “Mr. Bucholz has never had any criminal charges issued or investigations initiated against him yet his business and livelihood were completely demolished by assertions made on social media. Mr. Bucholz found a different professional path, and it is unclear to us why anyone would take issue with another person making a living for his family in a profession for which he has been fully vetted and licensed.”

The state’s licensing database shows Bucholz is listed as the qualifying officer for a Professional Investigator Agency called Lancer Inquiries.

After the inquiry by Michigan Advance, the George Law webpage was scrubbed and no information on Bucholz remains, although screenshots of the page indicate it was active until Thursday afternoon. A Google search of Bucholz’s name still shows a preview for his George Law page.

Another former Vanguard employee, Abby Clark, who was the chief strategist at Vanguard for most of 2018 and 2019, told the Advance that she also has reservations about Bucholz’s new line of work.

Bucholz had essentially stayed out of public view until Wednesday when a former employee posted on social media that he was now working as a private investigator.

“Honestly, there are many things I really enjoyed about it,” she said. “First and foremost, me and most of my colleagues had some really wonderful clients. I got to do some really great work for clients that I was really proud of. I had a lot of independence frequently with my clients.”

Clark says that independence was due to the fact that she was more experienced than those who Bucholz typically hired.

“T.J. typically hired a lot of young women, fresh out of college. Fresh out of college,” she said with emphasis. “I was a different kind of hire. He made clear I was a big get for the firm. I brought in a lot of my own clients and I got to work independently a lot. And a lot of it was fun and great.”

Until it wasn’t, she said.

“He was extremely erratic and it took me a bit to catch on to the extent to which he had a temper, and it took me a little while to catch on to the fact that he was a pathological liar,” said Clark. “He did a good job of setting a few of us against each other. It was all women at the firm and he sowed an atmosphere of mistrust amongst us that made us feel like we didn’t like each other and couldn’t trust each other.”

However, Clark says once the senior staff and junior staff started talking more, they realized he was telling each of them different things. She said six of them left at the end of 2019, which was the majority of the staff. The allegations were made public a year later.

“We realized just how toxic the environment was, but we wanted to all kind of get out together,” recalled Clark. “So it took a few months for everyone to queue up a next thing, and then we all left in very quick succession so that we didn’t leave anybody behind.”