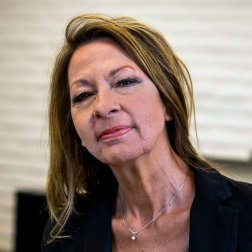 Dana Gentry is a native Las Vegan and award-winning investigative journalist for the Nevada Current. Gentry began her career in broadcasting as an intern and reporter at Channel 8, KLAS-TV. In 2001, she launched "Face to Face with Jon Ralston" and the weekly business programs In Business Las Vegas and Vegas Inc, which she co-anchored with Jeff Gillan.

LAS VEGAS — Within hours of a federal judge sentencing Roger Stone to three years and four months in prison for “covering up for the president,” that president, Donald Trump, lashed out at the justice system during an hour-long, rambling redress of grievances to recently released prisoners marking their graduation from a re-entry program in […]

Attorney General Dana Nessel is joining attorneys general in 19 states in asking the U.S. Supreme Court to resolve judicial uncertainty surrounding the Affordable Care Act (ACA).  The Fifth Circuit’s ruling in December that the ACA’s individual mandate is unconstitutional could unravel the law in its entirety, something backed by the President Trump administration. The […]

Wildlife activists are condemning the President Trump administration’s reauthorization of government use of a weapon designed to kill coyotes by spraying cyanide into their mouths.  The devices, M-44s, are likened to “cyanide bombs” by activists, who say they inhumanely and indiscriminately kill thousands of animals a year.  “In my 25 years working with M-44 victims […]