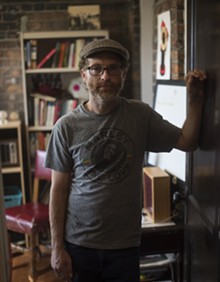 At the beginning of the COVID-19 pandemic, a disturbing trend emerged that worried health officials: the virus was killing an alarming number of Black residents in Michigan. As a result, Gov. Gretchen Whitmer assembled the Michigan Coronavirus Task Force on Racial Disparities to examine the inequalities and develop a plan to reduce them. Chaired by […]

A Trump loyalist and conspiracy theorist who defended Russia’s invasion of Ukraine, said COVID-19 is no worse than the flu, and wants to overturn the 2020 presidential election in Michigan is one step closer to being an elected state representative. On Tuesday, Robert Regan won the special primary election for the 74th state House District […]

The Michigan Office of the Auditor General debunked conspiracy theories about widespread election fraud, concluding in a report released Friday that local and state officials conducted accurate audits of the election that found little to no irregularities. The office found no evidence of fraud and said the post-election audits were sufficient, with some exceptions, contradicting […]

A Waterford Township man pleaded guilty Wednesday to federal conspiracy charges for plotting to kidnap Gov. Gretchen Whitmer and said he was not entrapped by FBI agents and informants. Kaleb Franks, 27, is the second suspect to plead guilty and agree to testify against the four remaining suspects. He faces up to life in prison […]

Federal prosecutors are investigating fake electors in Michigan, 6 other states

The Justice Department is investigating Republicans in Michigan and six other battleground states for posing as presidential electors and falsely declaring that Donald Trump won the election. Michigan Attorney General Dana Nessel referred the case to the Justice Department and said last week that there’s “absolutely” enough evidence to warrant charges against the 16 Michigan […]

Seven Michigan Republicans have filed a lawsuit against the state’s redistricting commission, arguing that the recently approved congressional maps are “non-neutral,” “arbitrary,” and disregard community boundaries. The suit asks a judge to order the commission to redraw the congressional districts so that fewer counties are broken up by district boundaries. It’s the second lawsuit challenging […]

Macomb County’s “forensic audit” of the 2020 election unveiled nothing remotely resembling fraud, further debunking repeated and unsubstantiated claims by supporters of former President Donald Trump. The audit by Alabama-based Pro V&V, a company that tests voting systems, examined election technology and found “no outside interference.” Among the baseless conspiracy theories is that outsiders hacked […]

U.S. Rep. Elissa Slotkin (D-Holly) plans to introduce federal legislation Wednesday that would require gun owners to safely secure firearms following the deadly shooting at Oxford High School. Anyone who fails to properly store their firearms faces up to five years in prison if a child uses as a weapon to injure themselves or commit […]

Oxford school officials rejected Michigan Attorney General Dana Nessel’s offer to review last week’s shooting that killed four students and injured seven other people, she announced late Monday. Nessel made the offer Sunday, saying her department was the “perfect agency” to investigate the circumstances surrounding the shooting at Oxford High School. The idea was to […]

Residents who live near Stellantis’ year-old Jeep assembly plant in Detroit filed a federal civil rights complaint against state environmental regulators on Monday, alleging racial discrimination for allowing the automaker to increase air emissions in the predominantly Black city. For months, a pungent, headache-inducing odor has been wafting from the Jeep Grand Cherokee plant on […]

Michigan will soon offer driver licenses and identification cards with a nonbinary gender marker of “X,” Secretary of State Jocelyn Benson announced this week. Beginning Wednesday, residents will no longer be limited to selecting either male or female on their IDs. She said in January this was under consideration. “I am proud to support Michiganders […]