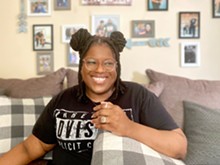 Born and raised on Detroit's Westside, Alex Washington is about as Detroit as they come. She is the Metro Times' Digital Content Editor. Her writing has been published in Real Detroit Weekly, The Detroit Free Press, Model D, BLAC magazine and Detour Detroit.

State Rep. Jewell Jones (D-Inkster) has pleaded guilty on several charges stemming from his 2021 arrest. According to the Detroit News, the lawmaker pleaded guilty to four misdemeanors: possession of a firearm while under the influence, operating while intoxicated, escape of lawful custody, and reckless driving. He also pleaded guilty to two felony counts of […]

When state Rep. Jewell Jones (D-Inkster) violated his bond for a second time back in July, Judge Michael Hatty warned the young state representative he would be looking at jail time if he violated any other orders. Hatty kept his word. On Tuesday afternoon, Jones was jailed after violating his bond for a third time. According […]