Angela Rigas at “Operation Haircut,” another right-wing protest at the Capitol, May 20, 2020 | Anna Liz Nichols

That’s apparently despite Rigas’ participation in the Jan. 6, 2021, protest at the U.S. Capitol while Congress was set to certify President Joe Biden’s victory over former President Donald Trump.

Rigas also brought a weapon — a collapsible baton — with her, according to a video reposted by the @MichiganTea Twitter account that she took on her way to Washington, D.C. She said she did not go inside the Capitol.

A spokesperson for POAM did not immediately respond to an Advance inquiry about why Rigas’ participation on Jan. 6 did not disqualify her for its endorsement. 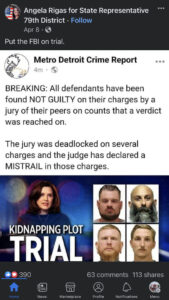 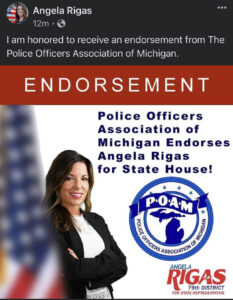 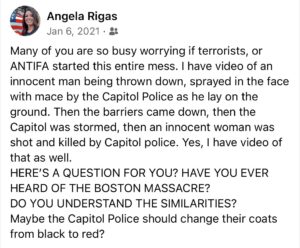 Rigas will go up against Democrat Kimberly Kennedy-Barrington for the newly redrawn 79th House District in Southwest Michigan on Nov. 8.

Rigas has made several social media posts that appear to be critical of law enforcement. In a Facebook post on Jan. 6, 2021, Rigas criticized the U.S. Capitol police for clashing with right-wing protesters. Comparing the incident to the Boston Massacre, a 1770 riot involving American colonists and British soldiers, she wrote: “Maybe the Capitol Police should change their coats from black to red?” British soldiers were known as redcoats.

Rigas was endorsed by Trump in December after stating she was proud of her attendance at the riot.

Protesting on Jan. 6 was a “highlight of my life,” she later said at a Michigan “MAGA mixer” in March.

Rigas was also one of seven individuals cited for disorderly conduct during the May 20, 2020, “Operation Haircut” protest on the Michigan Capitol lawn. She and others were protesting against Democratic Gov. Gretchen Whitmer’s early executive and health orders related to COVID-19 containment.

The charges against Rigas and six others were eventually dismissed.

In wake of Lyoya’s death, a reckoning with Grand Rapids’… by Anna Gustafson May 7, 2022
UPDATED: Trump’s fake electors: Here’s the full list by Kira Lerner June 29, 2022
‘The playbook for authoritarianism counts on this’ by Anna Gustafson January 6, 2022