On Sept. 9, 1935, a street pageant festival was held in Detroit to celebrate the building of the Brewster Homes, the nation’s first federally funded housing project designed for African Americans.

They arrived at 651 Benton Street in the heart of the city’s growing Black community that by all accounts was bursting at the seams. Detroit’s African-American population skyrocketed from about 5,700 residents in 1910 to more than 120,000 residents in 1930. At the time, only New York City, Chicago and Philadelphia had more residents than the Motor City.

A makeshift platform awaited the dignitaries. One of the city’s most respected clergy leaders, the Rev. William Peck, pastor of Bethel A.M.E. Church and founder of the Booker T. Washington Business Association, was among many there to greet them. The city of Detroit and the Detroit Housing Commission, co-hosts of the event, called the program: “Demolition Ceremony and Public Reception for Mrs. Franklin D. Roosevelt.”

Construction followed in later weeks, but first land had to be cleared to make room for the new development. The event, in effect, served as a kickoff for the Brewster Homes; the nation’s first federally funded housing project for Black residents. 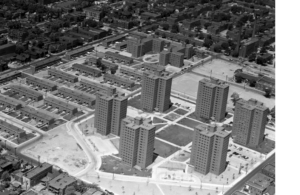 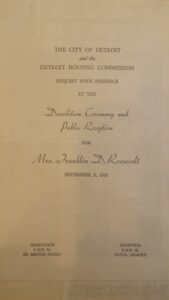 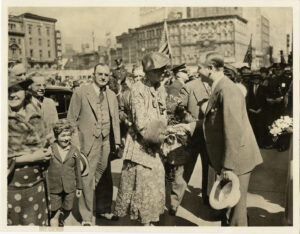 The first phase of the project opened in 1938. It contained 701 residential units in a series of four-story structures. The development, several streets wide, crossed Beaubien, St. Antoine and Hastings. By the early 1950s, the Frederick Douglass Apartments, two-six story low rises and six 14-story residential towers were completed to top off the development.

By the 1930s, a significant portion of the city’s lower east side was deemed by city and federal officials alike as “slum clearance.” Residential units and commercial structures, most of which were built in the previous century, had leaky roofs, inadequate plumbing, and collapsing porches.

President Franklin Roosevelt, a Democrat elected in 1932, pledged to pull America out of the economy-ravaged Great Depression, create government-sponsored and funded public works projects, get people back to work, and help local governments to rebuild sections of aging communities. After her husband died while serving his fourth term as U.S. president in 1945, Eleanor Roosevelt continued her effort in the area of public service.

In December 1945, President Harry Truman appointed her as a delegate to the United Nations General Assembly. In April 1946, she became the first chair of the preliminary United Nations Commission on Human Rights.

Over the years, the Brewsters Homes development was a home of legendary Motown Records act The Supremes and many other noted Detroiters.

The last of the Douglass towers were demolished in 2014. A Michigan Historical Marker was erected to highlight the significance of the Brewster Homes.